He Made Enough Money To Retire At 27, So Why Did Jon Carder Go Back To Work Three Weeks Later?

Jon Carder had made enough money to retire when he was just 27 years old. The California native was a sophomore studying philosophy and art at San Diego's Point Loma Nazarene University, when he founded his first company, BabysHaven. The company sold baby products online and Carder dropped out of college to pursue his entrepreneurial dreams. When he was 22 years old, he sold BabysHaven. It wasn't a big, life changing payday, but it did give him the funding to start his next company – Client Shop – an online tool for helping people find a low rate for a home loan.

Within the first year Client Shop was in business, Carder and his two partners grew the company to where it was making millions of dollars in revenue. He bought a brand new truck and drove it to his parents' house just to show it off. His mother thought her young son had started selling drugs. She didn't understand how you could make money on the Internet– legitimately.

Four years later, Carder was on the cover of Fortune Small Business magazine with the caption, "Jon Carder sold his business, Client Shop, for more than $10 million." That was when his mom realized her son was running a real business.

Client Shop was only around for four years, but in that time it grew quickly. In 2005 it had over 100 employees and won the title of San Diego's fastest growing company. By the following year, Carder's company had $8.4 million in revenue and he decided to sell. His timing was impeccable. A few months later, the housing bubble burst and Client Shop's value plummeted. But Carder had gotten out in time, and with $10 million from the sale to Internet Brands, had made enough money from the sale to never work again. He decided to do just that and took off on an around the world surfing trip. 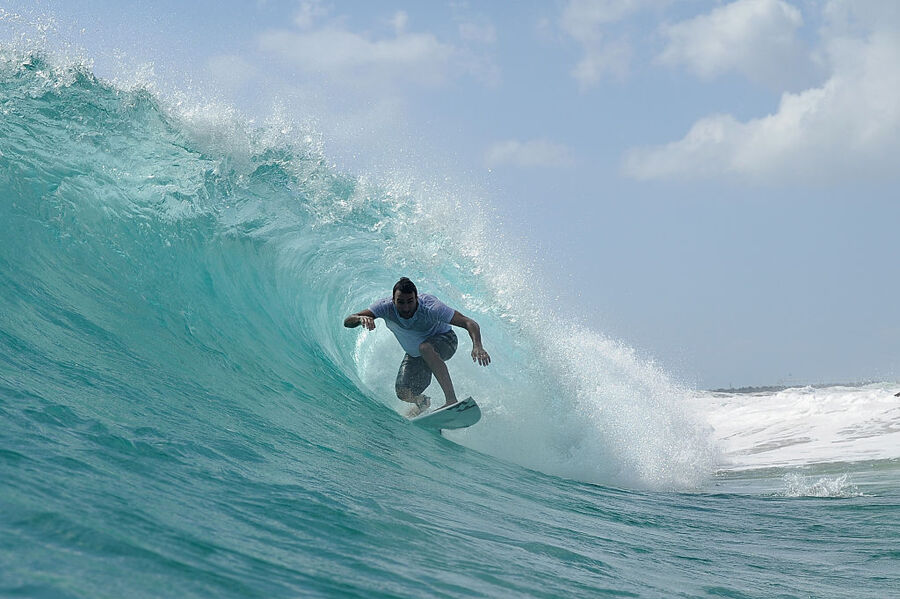 He had become an entrepreneur for one reason and one reason only: to make money. Having accomplished that goal, he felt like he'd done all he needed to do and invited 10 friends to join him on a two week surf trip in Indonesia to kick off and celebrate his retirement.

After the two weeks were up, Carder's friends, most of them in their mid-to-late 20s, headed home and back to their jobs. Carder planned to continue traveling and surfing indefinitely. However, just a few days after his friends left, Carder was on a remote island in Timor, Indonesia and he was bored. At that moment he decided to come out of retirement and create another company. While he'd learned that money can buy happiness, it was a limited happiness. For him, being an entrepreneur was no longer about money, it was about making an impact.

In the third week of his retirement, he entered a small hut in Indonesia that had Internet access and bought the domain MojoPages.com. His idea was to turn it into a place for people to find the best local business like doctors, restaurants, and shops by relying on reviews and advice from people who'd used those services, eaten in those restaurants, or shopped in those shops previously. Sound familiar? It should. That is what Yelp does and Yelp had a two year head start on Carder's fledgling company, a fact of which he was wholly unaware.

On the very day that MojoPages.com launched, Yelp announced that it had closed a $10 million round of funding. Carder realized he and his new venture would never catch up. So Carder moved on.

He began studying game mechanics for his new idea: he wanted to gamify the $700 billion restaurant market. Nothing had changed much in that industry in decades. Carder saw an opportunity to make a huge impact again and in 2010 he founded Mogl with Jarrod Cuzens and Jeff Federman. Mogl is an app that allows the user to earn cash back at thousands of restaurants without the inconvenience of digging in your wallet for that paper punch card entitling you to a free sandwich once you've bought 10. With Mogl, the user gets back various percentages of the money they spend every month. Carder was inspired by Foursquare (now Swarm) and how it gamified its app by letting users compete, to become mayor of a bar, restaurant, gym, etc. He and his team set out to make restaurant loyalty programs as addictive as checking in on Foursquare (used to be). Carder may just be onto something once again, as this past fall, Mogl raised $11 million in funding to bring the company's total funding to $25 million. Jon Carder is now 36 years old.