Lululemon: A Tribute to Chip Wilson and Yoga Pants

By Simon Gerard on March 19, 2013 in Articles › Entertainment

Earlier today Lululemon announced that they were recalling some of their yoga pants because one of their factories were making them too see through. I don't know who would complain about that, after all everybody loves yoga pants. Girls love yoga pants because they are comfortable, sexy and can be worn pretty much anywhere. Guys love yoga pants because they are sexy and girls wear them pretty much anywhere. Every girl who loves yoga pants and every guy who has ever been "stuck" in line behind a girl sporting a pair, owes a huge debt of gratitude to a man named Chip Wilson. Chip Wilson's 142 Lululemon Athletica stores have made yoga pants one of the most popular and fashionable trends of the last few years. Even guys who are not familiar with the Lululemon brand have, at some point, probably been hypnotised while following a girl who was wearing a pair of their signature black tights. But don't worry if you never get the chance to thank Chip personally, he's doing just fine. When Lululemon went public, Chip Wilson became a billionaire. Today he's worth over $2.9 billion!. So in honor of Chip Wilson's invaluable contribution to modern culture, fashion and health trends, we take a look back at how it all started and check out some of our favorite photos of celebrities in yoga pants…

Chip Wilson grew up mainly in San Diego but spent a lot of time in Vancouver, British Columbia. His first business venture was Westbeach Sports which brought 80s surf and skater style clothing to Vancouver and Canada. He expanded in the 1990s with snowboard apparel. In 1997, Wilson sold his share of Westbeach for $1 million. 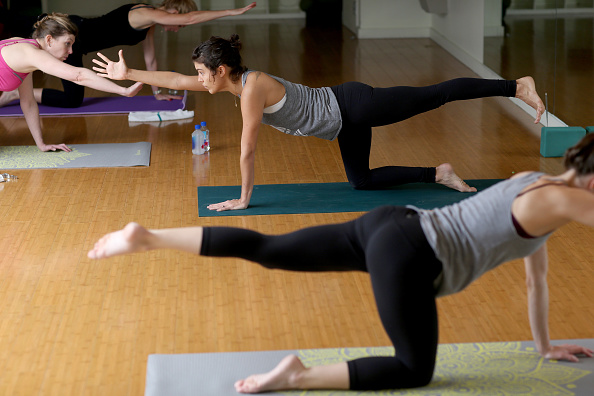 With a million dollars in the bank and nothing else to do during the day, Wilson began taking yoga classes in the quaint beach neighborhood of Kitsilano in Vancouver. In fact, he participated in the very first commercial yoga class ever offered in Vancouver. Chip noticed that the common attire being used in sweaty, stretchy power yoga classes was made from cotton which is not a very breathable or elastic fabric. Chip immediately set out to create a more comfortable alternative athletic clothing option for both women. The result was Lululemon Athletica.

One location quickly grew to over 40 across Canada. In 2005, an American private equity firm purchased a 48% stake in Lululemon for $225 million. Over the next 10 years, Wilson used his war chest to grow Lululemon into an $8 billion public company with annual revenues of $1 billion and annual profits of $560 million. In addition, Wilson inadvertently created a health trend that encouraged physical fitness and mental health by bringing yoga to the mainstream. He also contributed to the happiness of men everywhere by encouraging girls exercise more often and wear skin-tight pants all the time.

Recently, Vancouver was named 3rd worst dressed city in the world by MSN Travel. The reason the article gave was the overwhelming number of people wearing Lululemon in public while performing everyday errands. Apparently MSN thinks yoga pants should only be worn for yoga or working out. Vancouver was also ranked 6th by MSN Travel having the most beautiful women in the world so something doesn't seem to add up. Having spent a fair amount of time in Vancouver, I personally give my full support of yoga pants being worn for any reason or occasion. Do you agree?

1) NO! Yoga pants should only be worn while doing YOGA.

2) YES! Women should wear Lululemon proudly even if they are not working out.