Louis CK To Daughters: I Earned My F*[email protected] Mercedes Limo… You Take The Bus!

By Brian Warner on April 13, 2015 in Articles › Entertainment

Louis C.K. was 25 years old in 1989 when he moved from Boston to Manhattan to make his stand up dreams come true. Today, 26 years later, he is the undisputed King of Comedy. He sells out stadiums when he performs standup. He's actually the first comedian to sellout Madison Square Garden three times in a single year. His FX show has won dozens of awards including two Emmys. He's even a bonafide movie star with appearances in films like "The Invention of Lying" and "American Hustle." This incredible success has brought the 47 year old a current net worth of $25 million. That's an amount of money and level of success that probably would have been unimaginable to Louis between the years 1989 and somewhere around 2010. But life wasn't always so amazing for Mr. Székely (that's his real last name)…

Like most people who decide to pursue a creative passion, Louis had to live through a decent number of less than glamorous years. He recently described his first NYC apartment as "pretty gross." He actually time-shared that first apartment with 10 other comedians. His share of the $1000 rent was $200. The apartment didn't have a kitchen and he had to sleep on what was basically an adult bunk bed. 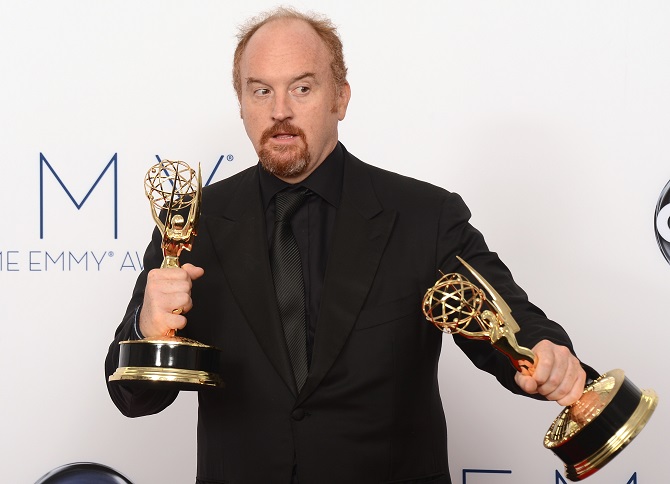 Louis recently sat down with The Hollywood Reporter to describe what it was like in those early years, what it was like when he first started making money, and how he tries to ensure his two daughters grow up to be normal, despite having a super rich and famous dad. Here are some of the best parts of the interview:

On his first taste of success (which happened when he was 42):

"I really didn't have anything growing up, and you never forget that. We lived in a split-level house, and my mom worked all day and raised us on saltless crackers. I always have a sense that I still might end up back there — or driving a cab or teaching community college somewhere.

When I first started making tons of money, it freaked me out. I would always get 10 grand in cash every show because I needed to touch the money. I needed to feel like it wasn't just going to pay my bills. I'm a bit like boxers in that way. Boxers go and buy, like, a gold car because they just want to feel like they understand what they have. I'll be a little dumb like that. So I was squirreling away cash — I had something like $100,000 hidden in my apartment."

On what happens after he feels super successful:

"It's a little like Mount Everest. When you summit, you spend about 20 minutes up there, and you do a little dance, but if the 20-minute dance was really it, would you really risk your life for the amount of work it takes to get up and down? So every time I feel like I've found a clearing, I try to find something else that I don't know how to do yet. That's just much more interesting to me."

On keeping his kids grounded:

"I really try to be aware of not letting them grow up weird or spoiled… My 13-year-old daughter leaves the house at 7:15 every morning and takes a smelly city bus to school way uptown. It's like 8 degrees out, and it's dark and she's got this morning face and I send her out there to take a bus. Meanwhile, my driver is sitting in a toasty Mercedes that's going to take me to work once both kids are gone. I could send her in the Mercedes and then have it come back to get me, but I can't have my kid doing that. I can't do that to her. Me? I earned that fucking Mercedes. You better fucking believe it."