A Lottery Winner Dying Broke Isn't News. But The Way This Guy Blew His Fortune Is Especially Shocking

By Brian Warner on December 4, 2013 in Articles › Entertainment

Stories about lottery winners going broke isn't exactly ground breaking news. In fact, statistics show that roughly 70% of all lottery winners are broke within a few years of receiving their jackpot. Similarly, an estimated 70% of NFL players and 60% of NBA players will be broke within five years of retiring. And while the concept of blowing through tens of millions of dollars may seem like an unimaginable sin to the average non-lottery winner/pro-athlete, it actually kind of makes sense. Generally speaking, people who play the lottery or end up becoming a professional athlete, come from very low income backgrounds. These people are not at all equipped to handle a sudden windfall of tens of millions of dollars. Their money management skills are non-existent and they easily fall into a world of living way beyond their means. So, why are we writing about former Powerball winner David Lee Edwards? What's so special about him? Well, the way in which David Lee Edwards ended up dying penniless and alone after blowing through a $27 million fortune is especially shocking.

The first part of David Lee Edwards' rise to fame and fortune is a rags to riches tale pulled straight out of a movie. The story starts in the summer of 2001. David, a 46 year high old high school dropout, had already managed to spend 1/3 of his life behind bars related to an armed robbery conviction 20 years earlier. To make matters worse, David had recently been fired from his job laying fiber optic cable. He was dead broke and living out of his late-parent's house in a town called Westwood, Kentucky. As if all this wasn't bad enough, David was so broke that the house's water had been cut off. The one bright spot in his life was 27 year old fiance, Shawna Maddux, but he couldn't even afford to buy her dinner at McDonald's. 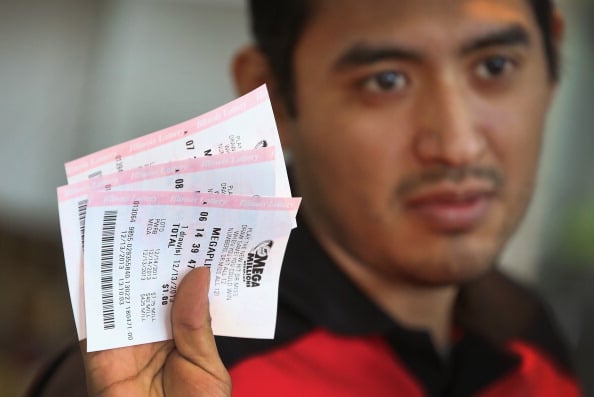 Swallowing his pride, David went to a friend and borrowed just enough money to turn the water back on and take Shawna out for a drink at nice hotel bar. Feeling lucky on the way to their date, the couple stopped at Clark's Pump-N-Shop convenience store and bought $7 worth of Powerball tickets, on a whim.

At the time, the Powerball had gone through 18 consecutive drawings without a winner. This allowed the jackpot to balloon up to $280 million, the third highest jackpot on record up to that point.

Later that same night, David and Shawna almost died from shock when they saw heard their exact numbers called in the Powerball drawing. David turned out to be one of four people who chose the correct numbers and were therefore entitled to a $73.7 million prize. His payment options were $2.9 million per year for 25 years or a onetime payout of $27 million. Despite what you already know about the ending of this story, every single financial advisor in the world will tell you that taking the lump sum is always the better choice. That's because, in theory, investing $27 million over 25 years will be worth exponentially more than the annual payouts.

In fact, a Palm Beach financial planner named James Gibbs even laid out a plan for David that would have enabled him to earn $85,000 per month in interest for the rest of his life by following a conservative investment plan. Gibbs put $16 million worth of the winnings into extremely safe bonds and annuities to preserve a good chunk of the wealth, but David cashed them out.

When David came forward to accept his ceremonial large check, he made the following ironic statement: "I would like to accept it with humility. I want this money to last, for me, for my future wife, for my daughter and future generations." This is precisely when life started to go downhill.

Mansions, Jets and a Fleet of Luxury Cars

Almost immediately after winning $27 million and proclaiming that he would spend the money wisely to make it last for future generations, David pretty much did the exact opposite. Before even receiving the money, David arranged a $200,000 bank loan so he could fly a group friends out to Las Vegas to celebrate. He blew the entire $200,000 in six days. In November 2001 he upgraded from a $30,000 dilapidated Kentucky house without running water to a 6000 square foot $1.5 million mansion in a gated community in Palm Beach Gardens, Florida. He then proceeded to spend $1 million purchasing a fleet of luxury cars that included a $90,000 Dodge Viper and a $200,000 Lamborghini Diablo. He bought so many cars that the neighbors complained to the gated community's board of directors. Their main complaint? He owned so many cars that their posh community started to look like a car dealership.

David's other indulgences included a $600,000 to buy Palm Springs mansion, a limo company, an $80,000 gold watch, a $160,000 ring, a $30,000 plasma TV, three race horses and a collection of 200 replica medieval swords. And how was David going to travel back and forth between his mansions in Florida and California? He couldn't be expected to fly on a commercial airline like a chump, could he? Definitely not! So David spent $1.9 million on private Learjet. But that's not all. Perhaps with good intentions, David spent a whopping $4.5 million to purchase a fiber optics installation company.

Shockingly, within just three months of winning the lottery, David had spent $3 million. Within a year, he had spent a mind boggling $12 million. This is from a guy who a few months earlier barely had a pot to piss in.

Unfortunately, cars, planes, jewelry, mansions and private jets were not David's only indulgences. Sometime along the way, he and Shawna (who was now his wife) began abusing hardcore drugs. In 2004, Palm Beach police were called to their mansion after Shawna stabbed David with a crack pipe during a drug fueled rage. A year later, police were called to the house again. This time they discovered a large amount of cocaine, heroin, prescription pills, crack and used syringes in the master bedroom. Both Shawna and David had also contracted hepatitis from using dirty needles. At one point Shawna got so bad that David paid $80,000 for her to spend 60 days at Passages Malibu, a plush rehab clinic in Southern California.

Not long after this final police visit, a bank foreclosed on the Florida house. David and Shawna moved into a nearby rented warehouse that was being used to store his fleet of cars. Their drug use continued and eventually all their possessions had been sold, stolen or re-possessed. David owed $170,000 to Bank of America for his credit card and $50,000 to Florida for property taxes. An early low point occurred after David and Shawna split up and he was found living in squalid conditions out of that very same storage unit that was now filled with his own waste instead of luxury cars. David checked into rehab and then was transported right back to Westwood, Kentucky, penniless and alone.

Penniless and alone is exactly how David died this past week at a Kentucky Hospice. A truly shocking and sad fall from glory even by lottery standards. Stories like this definitely give the idea of a lottery curse some serious validity. Is it a curse? Are these people doomed to fail? Do you think you'd be able to make the money last? Even after reading the tragic story of David Lee Edwards, I bet we'd still all love the chance to find out!