By Amy Lamare on February 17, 2021 in Articles › Entertainment

Jennifer "Mimi" Pham is a longtime friend, former assistant to, and business partner of the late Tony Hsieh. She's suing Hsieh's family for breaching contracts she had to manage Hsieh's business affairs in the months leading up to his death. She claims she is owed not just back pay but also a share of future profits for a number of deals that fell apart after Hsieh passed away last year. Among those deals is the management of an event venue in Park City Utah, as well as the time she spent trying to launch a documentary production company for Hsieh. Attorneys for Pham filed her complaint on February 5 in Clark County District Court of Nevada.

This is just the latest lawsuit filed on behalf of a company Pham co-managed for Hsieh. Last month, her Baby Monster LLC filed a lawsuit claiming it is owed $1.2 million. She alleges that she had an agreement with Hsieh to hire contractors to do due diligence on investments Hsieh was considering. Allegedly those contractors are still owed hundreds of thousands of dollars in fees. This lawsuit reveals that Hsieh and Pham were so close he used her cellphone number as his main contact number. Hsieh and Pham had the same address on their driver's licenses. The court filing said that Pham was his "assistant, right-hand person, and friend" for 17 years. 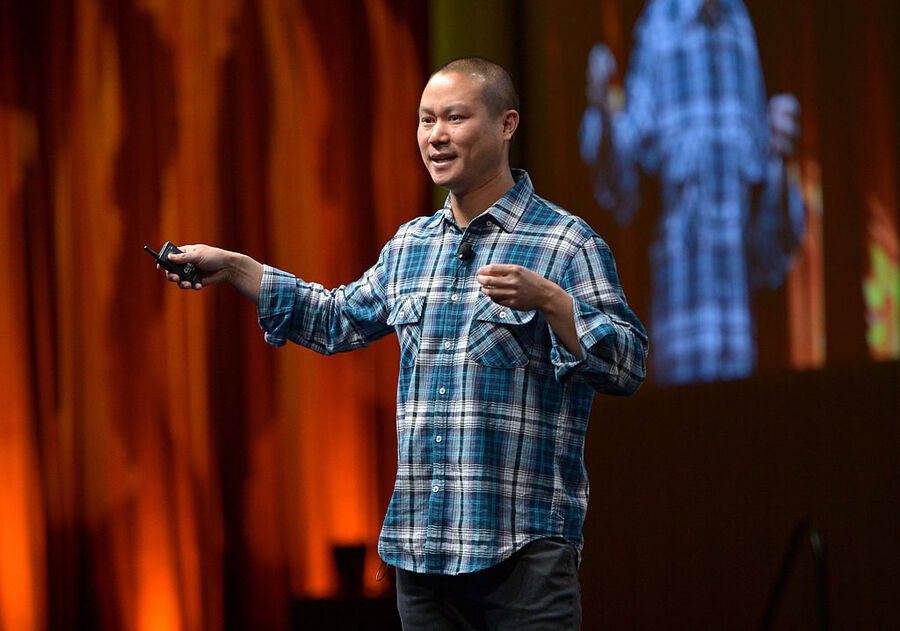 At the time of his death, Hsieh's estate was valued at $850 million. Hsieh died in a house fire in Connecticut on November 27, 2020. Tony had two massive business wins during his life: In 1998 he sold a business called LinkExchange to Microsoft for $265 million. In 2009 he sold Zappos to Amazon for $1.2 billion in Amazon stock. Unfortunately, it was revealed that Tony left a very messy estate and no will. His father Richard and brother Andrew were made co-executors of Tony's estate. According to a court filing, Hsieh's father and brother issued a notice last month to suspend the contract.

Hsieh is best known as the founder and CEO of Zappos. After founding (and selling) a number of tech companies, Hsieh (alongside Alfred Lin) turned to the idea of selling shoes online in 1999. At first, Hsieh was not convinced that this was even a remotely viable idea. But, after learning that the footwear industry in the U.S. (at the time) was a $40 billion market, with almost no sales occurring through the internet, he changed his mind.

In 2000, Hsieh joined Zappos as CEO. One of his first decisions was to relocate Zappos corporate headquarters to Las Vegas, citing the relatively reasonable cost of labor and real estate compared to the San Francisco Bay area. In his first year as CEO, Zappos earned an impressive $1.6 million in revenue. Nine years later, Zappos's revenues had grown to over $1 billion per year. Along the way, Zappos started to earn a reputation for having an amazing corporate culture that focused acutely on employee happiness and providing the best customer service of any retailer. Zappos' internal culture is governed by what Hsieh calls Zappos Family Core Values.  There are amazing reviews for Zappos' customer service all over the internet. Hsieh has often remarked that Zappos sells customer service, not shoes. This is evident. In 2020, the company debuted the sale of single shoes for people who don't need two.

After the sale to Amazon, Hsieh stayed on at Zappos and leased the old Las Vegas City Hall building downtown to move the company too. This led to him investing $350 million in the Downtown Product, a re-development venture in Las Vegas designed to build a startup community and revitalizing downtown Las Vegas. The neighborhood has been on the decline for the better part of 25 years, but where most saw homeless people, seedy motels, and blight, Hsieh saw opportunity.

He moved to Park City, Utah in 2020 as the Covid-19 pandemic took hold of the U.S. In Park City, Hsieh set out to build a new community by buying $70 million worth of property. He also set up a $30 million angel fund for local tech startups. People surrounded him in his last months who were specifically there because Hsieh hired them to carry out various tasks – like making a documentary about nitrous oxide or building an ice bar. Reportedly, as his time in Park City dragged on, Hsieh was dealing with mental health issues and drug addiction and was reportedly planning to check into rehab to deal with his drug and alcohol issues.

Hsieh was only 46 years old when he died. He died two weeks before his 47th birthday. Hsieh was unmarried with no children at the time he died, which might be one reason he neglected to make any official plans for what would happen to his fortune. He stepped down as CEO of Zappos in August 2020 after 21 years with the company.

Pham's lawsuits are likely not going to be the only ones that Hsieh's estate has to navigate. According to a report in the "Wall Street Journal," the walls of Hsieh's $30 million Park City mansion were covered in hundreds of Post-It notes. Each one had a promise to fund an idea on it. Unfortunately for his estate, these Post-It notes could be considered legally-binding contracts. The executors of Tony's estate must now look into each and every Post-It note and possibly follow through on the funding to avoid more lawsuits and, in a way, to carry out Tony's wishes.