By Simon Gerard on October 28, 2011 in Articles › Entertainment

Big news to report. For the first time since the launch of Celebrity Net Worth we've actually increased Lindsay Lohan's net worth! The only news we've heard about Lindsay over the last two years makes her look like a career criminal instead of a career actress. And not a very good criminal because she keeps getting arrested or violating her parole. On top of that, she's just recently been sued for owing thousands of dollars in limo fees even though she also recently bought an $80k Porsche. All of these scandals have only resulted in negative updates to her net worth. But not today so congrats LiLo!

The exact amount Lindsay Lohan is set to earn for posing for Playboy hasn't been confirmed, but it's been rumored that Hugh Hefner offered her $750,000 and she countered with a cool $1 million. Lohan's rep has denied that she will pose and Playboy hasn't responded yet either. Her class-act mom Dina Lohan, who has been shopping around a tell-all book about the own family, has said the photo-shoot went great. It's also been reported that Lindsay's 17 year old model sister came along to the watch the pics get snapped. 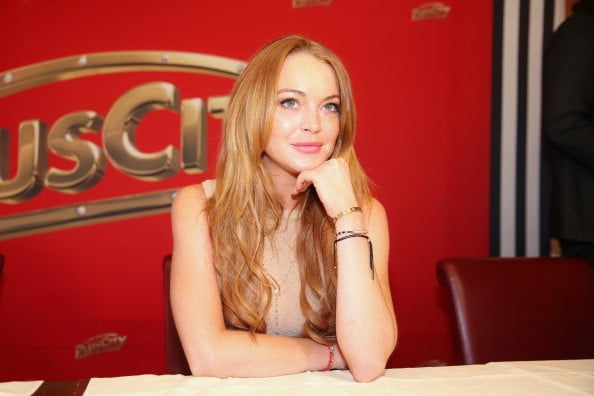 In other related crazy Lohan family news, father Michael Lohan is currently in the hospital after being arrested. Following domestic violence charges laid against him by his former girlfriend, he decided to harass her against a judge's order. The police arrived to arrest him over this violation at a Tampa motel at which point he tried to escape by jumping off a third floor balcony, down 34 feet to the ground. He tried to run and hide behind some trees, but was caught by the cops. Because of his injuries he's hospitalized, and in classic Lohan tradition, drugs and alcohol are believed to be involved.

We'll have to wait for the official announcement from Playboy to find out when the issue with Lindsay Lohan will hit magazine stands and online. How do you feel about the Playboy spread? Is it worth the money? Will this finally kill her Hollywood career? Will you buy her her copy of Playboy?