By Brian Warner on May 1, 2015 in Articles › Entertainment

Floyd Mayweather has a perfect career record in professional boxing. Between his first professional match in October 1996 and today, Floyd has fought 47 times. He has won all 47 matches, 26 by knock out. But that doesn't mean Floyd has never lost a match. Mayweather's amateur record is 84 and 6. The last time Floyd lost was at the 1996 Olympics in Atlanta. Floyd was 19 years old, and he lost to a 27-year-old Bulgarian fighter named Serafim Todorov. Floyd had to settle for a bronze medal. As we all know, that defeat at the Olympics didn't stop Money Mayweather from having an enormously successful professional career. But what about Mr. Todorov? He must have also made a fortune as a pro boxer, right? He must be living a lavish life with a harem of Bulgarian women in a mansion somewhere, right? Unfortunately, as you're about to learn, life did not turn out so well for Serafim Todorov. 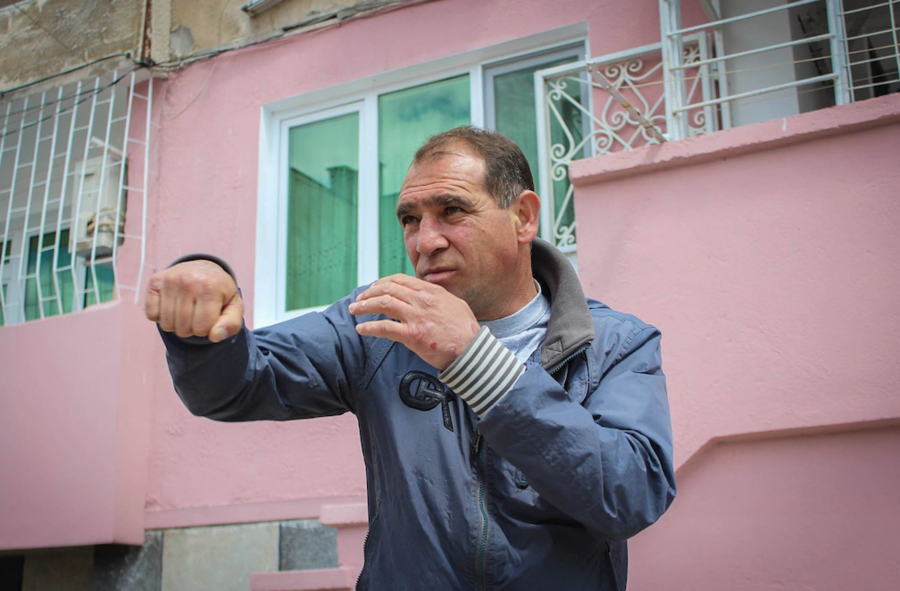 FYI: As of this writing Floyd Mayweather has a net worth of $280 million. He's earned $430 million in the ring alone. He is expected to potentially earn $180 million when he fights Manny Pacquiao on May 2nd. That would bring his career earnings up to $610 million. Thanks to these earnings, every year, he is the highest paid athlete in the world. Floyd owns an absolutely stunning collection of cars, watches, houses, planes and more…

The New York Times recently caught up with Serafim Todorov to check out his car/watch/house/plane collection. It was not nearly as impressive.

In fact, where Floyd is expected to earn around $5 million per minute on May 2nd, Mr. Todorov currently lives on a $435 monthly pension. That's $5220 per year.

How did this happen? How did his career go so wrong?

As an amateur fighter, Todorov won three world championships and two European championships. Todorov beat Mayweather at the Olympics by a slim 10-9 margin. Many boxing analysts felt that Mayweather should have won. Team USA unsuccessfully protested the decision. They even went so far as to accuse the Bulgarian judge of being biased. Todorov wound up losing to a Thai boxer in the final gold medal round and left Atlanta with a silver medal.

It was in the moments immediately following the Mayweather Olympic fight where Todorov made what he describes as the biggest mistake of his life.

After the match, Mayweather and Todorov were taken to a backroom where they both underwent doping tests. As they were waiting for the tests to be conducted, three random men entered the room. One was an interpreter, the others were professional promoters. They had a contract in hand that offered a big signing bonus, a house and a car. He recalled the scene for the NY Times:

"The other two men leaned in, one of them holding a pen. But Todorov pushed it away.

"Without considering, I said no," he said. "I just said it quick, like that. No."

He looked down. "You know what happened next? The two men went over to Floyd and started talking in English."

Obviously that wasn't the only reason Serafim Todorov's career did not turn out as well as Floyd's, but it clearly was a fatal mistake. Todorov blamed his gold medal loss on the very same Bulgarian judge who allegedly helped him beat Floyd. He suspected that the Bulgarian judge was on the take and helping move the matches.

Todorov was heartbroken by the loss and upon his return to Bulgaria escaped into booze. He was at one point offered a $1 million professional contract, but the the deal fell through.

Todorov barely competed ever again in the world of boxing, professional or amateur. He spent the next 20 years drifting from one menial to another. He worked at a grocery store and as a taxi driver.

In a painfully ironic twist, today Todorov wishes he had lost to Mayweather back in 1996. If that had happened, Todorov believes, he never would have developed the bitterness for the sport that sent him down such a dark path for so many years. Instead, he might have stayed focused on training in order to get back on top. Along that hypothetical path, maybe he would have signed a professional contract. And maybe today he would be the one with hundreds of millions of dollars in the bank, instead of $435 per month.