By Max Savage Levenson on May 22, 2014 in Articles › Entertainment

Chances are, if you ever learned how to play guitar, you have tried your hand at Led Zeppelin's "Stairway to Heaven." Backed by wavering flutes, Jimmy Page's arpeggiated opening riff is one of the most recognizable guitar figures in all of rock history. The song is routinely voted as one of, if not THE, greatest rock song of all time. Stairway helped make the band's untitled fourth album, frequently referred to as "Led Zeppelin IV", the third most successful album of all time on American charts and the 11th best selling album worldwide. But now, over forty years since the song was released, a lawsuit has been filed claiming that Jimmy Page totally ripped off the opening riff. Here's what happened and the possible repercussions… 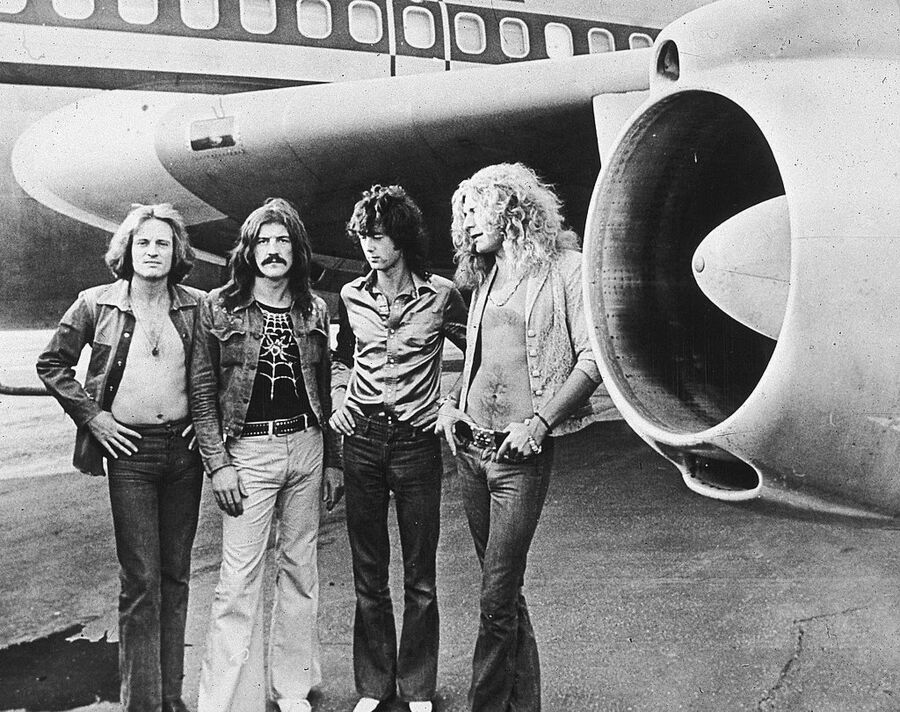 On one of their first American tours, Led Zeppelin opened for a California group called Spirit. Spirit had a song called "Taurus" that a mainstay in their standard repertoire. "Taurus" also featured an arpeggiated guitar riff played over flutes that inarguably bears at least a very strong resemblance to Led Zeppelin's biggest hit. Here's a Youtube clip that plays the riffs back to back so you can hear for yourself.

With the reissue of Led Zeppelin IV looming, the trust of Spirit's deceased songwriter, Randy California, is hoping to get the late musician a songwriting credit on Stairway. Mark Andes, the bassist of Spirit, suspects that Page heard the riff and wrote "Stairway to Heaven" after hearing Spirit performing "Taurus" during one of the many bills the bands shared. Andes adds:

"It is fairly blatant, and note for note. It would just be nice if the Led Zeppelin guys gave Randy a little nod. That would be lovely."

Randy California, who died in 1997, once told an interviewer:

"Well, if you listen to the two songs, you can make your own judgment. It's an exact… I'd say it was a rip-off. And the guys made millions of bucks on it and never said, 'Thank you,' never said, 'Can we pay you some money for it?' It's kind of a sore point with me. Maybe someday their conscience will make them do something about it. I don't know."

It's common knowledge that Led Zeppelin appropriated riffs and lyrical tropes from their blues heroes like Howlin' Wolf and Robert Johnson. But it's important to keep in mind that all artists borrow from their peers and heroes. John Lennon claims the riff from "Ticket to Ride" was inspired by a jingle he heard on TV. Decades later, the Offspring appropriated the Beatles' "Ob-La-Di." The list goes on and on.

Does Randy California merit credit for having written a riff that possibly inspired the intro to Stairway? Perhaps. Afterall, that intro is one of of the most crucial identifiers of Stairway even all these decades later. For better or worse, that's up to a judge and jury to decide.

And how much money is at stake? Well, for some perspective consider this: In 2008, a report by Conde Nast Portfolio magazine estimated that between record sales and royalties, Stairway to Heaven has generated over $560 million for the band to date. Part of the reason the song generated so much money was the fact that Zeppelin refused to release it as a single. This forced everyone who wanted to hear the song (in a time way before illegal music downloading) to purchase the full album. This also helps explains how Led Zeppelin IV sold an estimated 40 million copies worldwide to date. As we mentioned earlier, that's enough to make it the third best selling album in US history and the 11th best selling of all time worldwide.

It's unlikely that Randy California's heirs will see hundreds of millions or even tens of millions of dollars in back royalties. But the judgement could prove significant. A while back we wrote an article about the band Men At Work was successfully sued over their most-famous hit "Down Under". The lawsuit came 30 years after the song was released and still resulted in an undisclosed six-figure settlement for borrowing elements of an old Australian children's song called "Kookaburra Sits in the Old Gum Tree".

In addition to the six-figure settlement, the plaintiff in the Men at Work lawsuit was also awarded a 5% royalty on the song until it crossed into public domain, in the year 2058. This is where Randy California's heirs could really earn some serious bank. If the trust overseeing his interests is awarded half, or even a third of the royalties on Stairway going forward, it would likely result in hundreds of thousands and possibly even millions of dollars every year. Keep in mind that Sting earns an estimated $2000 a day off "I'll be Watching You". Stairway's residuals must be on par or even above that amount. Especially, as we mentioned, with Led Zeppelin IV's big re-issue looming.

Whether anyone can prove that Page snagged the riff for his band is going to be hard to prove. Any way you cut it, however, "Taurus" lacks the epic grandeur of "Stairway to Heaven." The two might have something in common, but at the end of the day, the success of "Stairway to Heaven" has to do with more than that opening riff. Of all the people who tried to learn the song on guitar, how many could handle the solo? That song was made for Jimmy Page.