By Paula Wilson on January 24, 2014 in Articles › Entertainment

Forget the Dos Equis guy. Kris Kristofferson might be the real-life Most Interesting Man in the World. How many other people, living or dead, have been a Rhodes Scholar, Army Pilot, country music superstar, Golden Globe winner and an Academy Award nominee? During his 50 year career has amassed an impressive number of awards and a fan base that spans generations.  He's starred in blockbuster films, written and recorded some of the most popular country music songs ever, and performed with the some of the most famous names in both the music and film industries. And on Sunday, February 26, 2014, Kris will be honored with a much-deserved Lifetime Achievement Grammy Award. For all of his accomplishments, he has managed to remain somewhat below everyone's radar.  Fans and the paparazzi leave him alone for the most part.  He has next to no social media presence.  He rarely does interviews.  Instead, he goes about the work of doing only those projects that interest him. Now in his late 70s, with a healthy net worth of $160 million, Kris Kristofferson shows no signs of slowing down. This is his amazing life story. 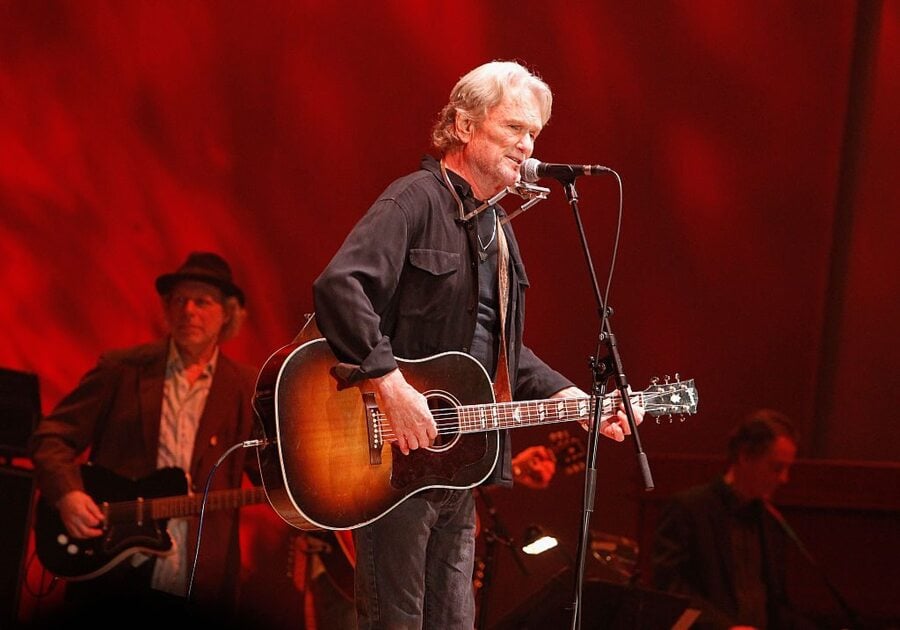 Kris Kristofferson was born on June 22, 1936 in Brownsville, Texas.  The son of a member of the U.S. Army Corps, he traveled all around the world as a child.  When Kris was a teenager, his family settled in San Mateo, California, where he attended San Mateo High School.  Initially, Kris was focused on a career as a writer.  He went on to attend Pomona College, where he majored in Literature, and also made a name for himself as an athlete.  While in college, he was featured in Sports Illustrated's "Faces in the Crowd" section, in recognition of his achievements as a student-athlete who excelled in three different sports: Rugby, football, and track and field .  He subsequently earned a prestigious Rhodes Scholarship, and moved England to attend Oxford University.  At Oxford, Kris shifted his focus from writing the great American novel to writing songs.  He secured a manager, and began recording tracks for Top Rank Records.  In an effort to make his name seem more American, and to create a public image that might appeal to young Brits, he was renamed Kris Carson.  Though he was focused on launching his music career, he only wrote music in the hope that it would gain him enough notice to make his first novel successful.

Sadly, his initial foray into music went nowhere.  He completed his BPhil in English Literature, got married, and made a few more attempts to launch a music career stateside.  When that didn't pan out, under pressure from his father Kris enlisted in the U.S. Army. He spent the next four years in the service, eventually achieving the rank of Captain, and serving as a helicopter pilot in West Germany with the 8th Infantry Division.  After four years, he was assigned to teach English Literature at West Point, but chose to leave the Army and make another attempt at launching a music career.  His parents were extremely displeased with his decision and disowned him.  They never reconciled.

His decision to focus on music created problems within his marriage, as well.  His son had extensive medical bills, and after relocating to Nashville, he struggled to make ends meet.  Kris and his wife soon divorced.  He worked multiple jobs, including sweeping floors at the Columbia Studios in Nashville where all the biggest country artists of the day recorded.  One day while sweeping, Kris finally worked up the courage to give Johnny Cash some of his songs.  Mr. Cash expressed support of his work, but was not interested in recording them.  But the encouragement alone was enough to keep Kris writing, however.

Next, Kris landed a  job as a helicopter pilot for a company in Louisiana.  Every other week, he would fly executives from the company back and forth between Louisiana and Nashville. In between flights he wrote songs and tenaciously went after his big break. Kris was willing to do anything to get his music heard. He even had the nerve to land his helicopter on Johnny Cash's front lawn one day to get his attention. When Johnny came out, Kris handed him a song book, then got right back in the chopper and took off. In 1966, his tenacity finally paid off.  An artist named Dave Dudley recorded his song, "Viet Nam Blues".  It was enough to get him noticed by Epic Records, which signed him in 1967.  Kris released his first official single that same year, but it was not a success.  However, the tracks he wrote for other artists were proving to be consistently popular.

Over the course of the next three years, he would write hit songs for such artists as Roy Drusky, Billy Walker and the Tennessee Walkers, Ray Stevens, Jerry Lee Lewis, and Roger Millier.  Some of the tracks he wrote during this time included "Sunday Mornin' Comin' Down", "Once More with Feeling", and "Me & Bobby McGee".  He signed with Monument Records, inking deals as both a recording artist and a songwriter.  His first full-length album was released in 1970.  The album, "Kristofferson", like his other solo efforts, was unsuccessful, despite the fact that it included a combination of new songs and his already established hits.  However, in 1971, the album was renamed , "Me & Bobby McGee", and suddenly, it took off.  He continued to write hit tracks for other artists, including Ray Price and Johnny Cash.  Ray Price was awarded "Song of the Year" in 1970 by the Academy of Country Music for his recording of Kris Kristofferson's song, "For the Good Times".  Johnny Cash was awarded "Song of the Year" in 1970 by the Country Music Association for his recording of Kris Kristofferson's song, "Sunday Mornin' Comin' Down".  The dual wins made Kris Kristofferson the only man to win the same award from the two major country music awards organizations for different songs. 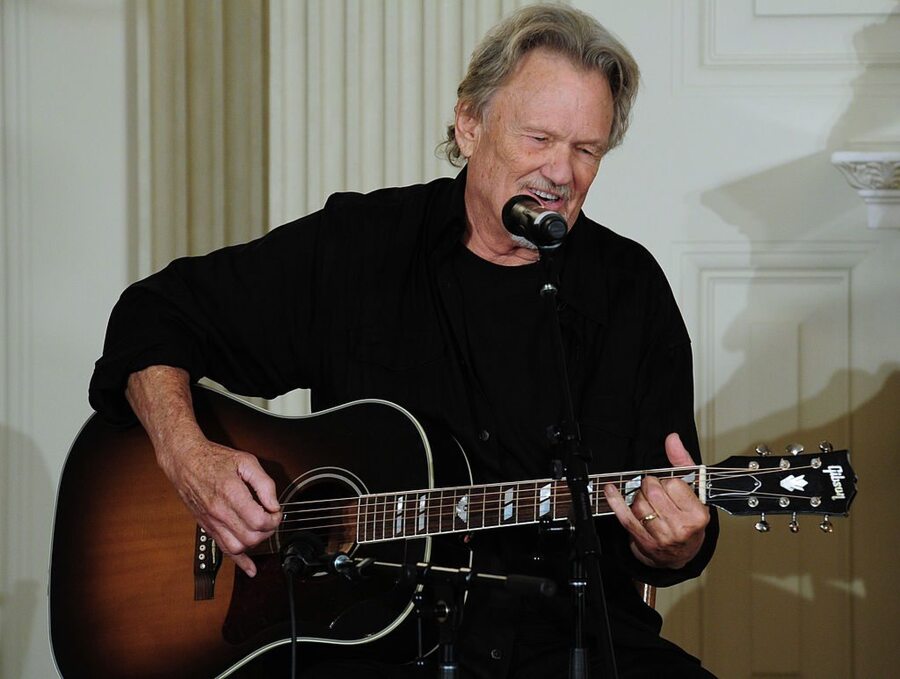 Kris gained further recognition after Janis Joplin recorded "Me and Bobby McGee".  The pair dated until her death, and the track was released on her album,"Pearl".  Suddenly, all of his songs began climbing the charts, and his second album, "The Silver Tongued Devil and I", was an instant sensation.  His third album, "Border Lord", was released later that year, and though sales were lackluster, critical-acclaim surrounding the album led to multiple Grammy nominations.  He subsequently won "Country Song of the Year" for his track "Help Me Make It Through the Night".  He released a fourth album, "Jesus Was a Capricorn" in 1972.  It spawned the hit song, "Why Me", and sold well.

As his star rose in Nashville, Hollywood came calling.  The good-looking, former athlete had already become friends with some of Hollywood's elite, and he began acting in 1971, appearing in Dennis Hopper's "The Last Movie".  He went on to appear in multiple films through out the 70s and 80s, while also releasing more albums.  His film work during this time included roles in such projects as "Pat Garret and Billy the Kid", "Bring Me the Head of Alfredo Garcia", "The Sailor Who Fell from Grace with the Sea", "A Star Is Born", for which he won the Golden Globe for Best Actor, "Heaven's Gate", "Songwriter", for which he received an Oscar nomination for Best Score, "Flashpoint", "Amerika", and "Big Top Pee-wee".  His acting career was hampered by his participation in the film "Heaven's Gate" in 1980.  "Heaven's Gate" was a major flop that attracted the ire of multiple politicians and became the everyone's favorite film to hate for a while.  In addition to his acting career taking a nose dive, his music career began to experience major ups and downs, as well.  He recorded a successful album with his then wife, Rita Coolidge, but his solo albums began experiencing sluggish sales.  It was clear Kris was still writing great music, as he continued to write hits for other artists, but his personal sound was not making an impression with audiences.

In the early 80s, he co-founded the supergroup known as The Highwayman.  Made up of Kris Kristofferson, Willie Nelson, Johnny Cash, and Waylon Jennings, the group released three massively successful albums.  The Highwayman disbanded in 1995, and almost immediately, Kris Kristofferson's acting career took off again.  His critically-acclaimed performance in John Sayles' award-winning film, "Lone Star", introduced him to a whole new generation.  Throughout the late 90s and early 2000s, he appeared in such projects as "Blade", "A Soldier's Daughter Never Cries", "Payback", "Planet of the Apes", "Chelsea Walls", "Where the Red Fern Grows", and "Blade: Trinity".  Then the music world began to recognize him again, as well.  He was inducted into the Country Music Hall of Fame, and won the CMT-Johnny Cash Visionary Award.  For the next few years, he would receive numerous music honors, while continuing to appear in high-profile film projects.  His more recent acting work includes roles in "He's Just Not That Into You", "Dolphin Tale", "Joyful Noise", and "Deadfall".  To date, he's released 17 solo studio albums, and eight albums of collaborations.  In 2014, he will be honored with the Grammy for Lifetime Achievement.  It is an honor he has clearly earned.

Over the course of his 50-year career, he has written amazing music.  He's starred in award-winning independent films, hard-hitting Westerns, and blockbuster "popcorn" flicks.  Heck, the man even had relationships with such famous woman as Rita Coolidge, Janis Joplin, Joan Baez, and Barbara Streisand.  He's been successful in multiple ways, for so long, that it is almost possible to take it for granted.  However, all of that success took years to create, and multiple attempts to manifest.  From a military career, to sweeping floors, to writing some of his most famous early tracks while sitting on an oil drum between helicopter flights, Kris Kristofferson never seemed to question that he would make it.  Mind you, he still hasn't written the great American novel, as he originally intended.  In this case, however, we can give him a pass.  He has charted an amazing American story of his own, portraying a range of memorable characters on film, and writing some of the best country songs ever.