You Just Won a Televised Singing Competition So Now You'll Make Loads of Money! Or Maybe Not…

By Paula Wilson on July 25, 2014 in Articles › Entertainment

Televised talent competitions have been making stars out of random – but talented – everyday people for decades.  With the birth of social media and digital downloads, a talent show contestant can go from total obscurity to mega-star seemingly overnight.  While many amazing performers have been discovered on our favorite talent competitions, not every winner has been able to capitalize on their moment of fame.  In fact, a distressing number of talent competition winners largely disappear post-win, and a surprising number of less successful finalists actually go on to strong careers.  Here's a look at some of our favorite talent competition shows, and the performers who made money once the cameras stopped rolling… and the performers we never saw again. 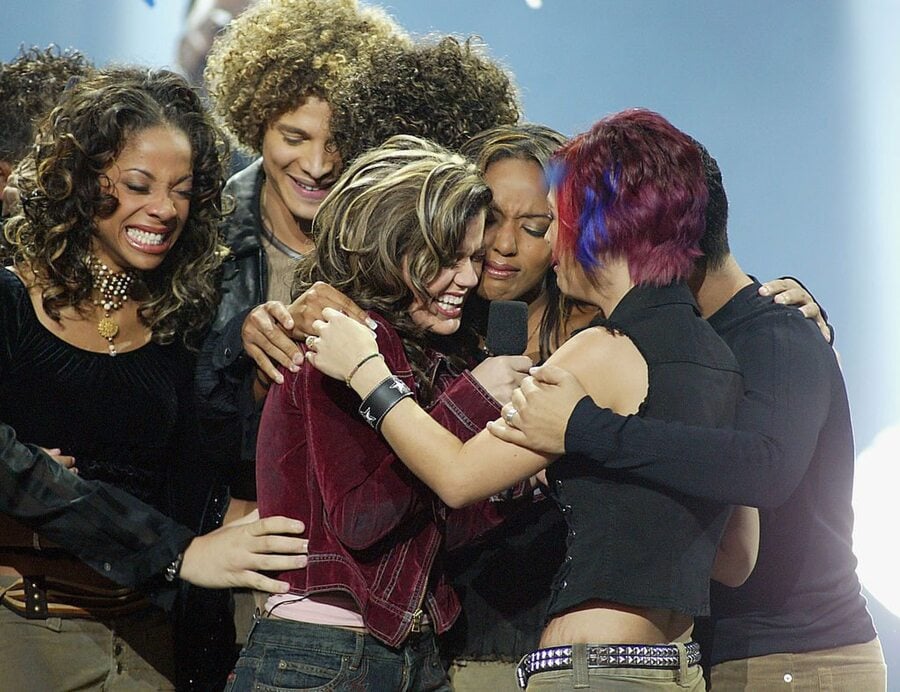 "American Idol" began airing in 2002 and over the course of its many seasons, it has managed to churn out some major singing stars, beginning with Season 1 winner Kelly Clarkson.  However, not every winner on "AI" has gone on to major bucks and some of the vocalists who have hit it big, didn't even make it to the semi-finals.

Kelly Clarkson has sold 20 million albums worldwide, had ninety-one #1 songs on the Billboard charts, all of her six albums have gone Platinum or multi-Platinum, and she has won three Grammy Awards and three American Music Awards, among many, many others.

Carrie Underwood won the fourth season of "American Idol" and has since gone on to sell 16 million albums and 30 million singles.  Her tours have made an additional $100 million and she has won six Grammy Awards and eleven American Country Music Awards.

James DeWyze, Jr. won the 9th season of "American Idol" and holds the unfortunate distinction of being the first "Idol" winner without significant album sales post-win.  He's released three albums since he was crowned winner in 2010, with his most popular selling 153,000 copies.  There was a recent bright spot, however, when one of his tracks was used on "The Walking Dead", and quickly climbed to #29 on Billboard's "Pop Digital Songs" chart.

Candice Glover was crowned the winner of "American Idol" Season 12.  Season 12 is also known as the season of Mariah and Nicki.  All the contestants on the program were overshadowed by the thinly disguised dislike that the two diva judges had for each other, so it's no wonder that Candice disappeared into obscurity.  Her debut album was released in February 2014 with little fanfare, and has sold only 27,000 copies to date.

Jennifer Hudson was eliminated in 7th place during the 3rd season of "American Idol" and everyone was bewildered.  She got the last laugh, however, turning in a stellar performance in 2006's "Dreamgirls" and winning an Oscar for her work, among many other acting honors.  When not appearing on the silver screen, she is in the recording studio.  She has released two albums to date and has won a Grammy Award to go with all her acting statues.

Chris Daughtry finished in fifth place on the fifth season of "American Idol", but he went on to storm the airwaves with his band, Daughtry.  To date, the group has sold 23 million albums and 60 million singles worldwide.  They have released four albums, won five American Music Awards, and have been nominated for three Grammy Awards.

When "The Voice" first started airing in 2011, it took audiences by storm.  Everyone loved the mentor format and the audition process, and it seemed poised to find the next great singing star.  Here was a show that had the potential to unseat "American Idol".  However, over the course of its first six seasons, none of its winners have really had any impact whatsoever.  In fact, more often than not, it's the show's non-winners that have managed to carve out appreciable careers.

Cassadee Pope already had a moderately successful career before she auditioned for the third season of "The Voice".  With a built in fan base and genuine talent, it wasn't hard to understand why she won.  The first two seasons had done little by way of changing the fortunes of their winners, so the producers of "The Voice" heaved a sigh of relief when her post-"Voice" solo album debuted at #9 on the Billboard Hot 200 in 2013.  It has since sold 175,000 copies.

The youngest winner on "The Voice" since it began, Danielle Bradbery had very little performing experience when she began her time on the show.  She took to performing in front of live audiences like a duck to water and went on to win.  Her first solo album debuted at #19 on the Billboard 200 and #5 on the Billboard Country chart.  It has since sold just over 136,000 copies.  However, it is her debut single, "The Heart of Dixie", that has made her the most successful person to come out of "The Voice".  The track has sold 375,000 copies to date.

The moment Javier Colon opened his mouth for his audition on Season 1 of "The Voice", he basically walked away with the win.  The golden-voiced family man continued to win over audiences right up until the end, winning $100,000 and a recording contract with Universal Republic.  However, soon after winning, he simply disappeared.  When his first album after winning "The Vovice" was released in late 2011, it had so little promotion that entertainment news outlets didn't report on it until almost a month after it hit the shelves.  To date, it's only sold 46,000 copies.

Jermaine Paul was already a successful back-up singer and Grammy-nominee when he auditioned for "The Voice".  He went on to win Season 2, and his cover of "I Believe I Can Fly" reached #83 on the US Billboard charts.  Then it was all downhill from there.  When he appeared on Season 3 of "The Voice", to sing the first single from his forthcoming solo album, the performance had so little impact that that there actually isn't any information regarding how many copies of the track sold.

Like just about everyone else on "The Voice", Dia Frampton had a career before auditioning.  She usually performed with her sister, as part of Meg & Dia, and her appearance on Season 1 was a foray into solo performance.  Her quirky sound eventually led her to a second place finish and her broadened fan base led her to a bigger career than Season 1 winner, Javier Colon.  Her first solo album post-"Voice", called "Red", debuted at #106 on the Billboard 200, and reached #1 on the Billboard Heatseekers chart.  It also went Gold in Thailand.  While it sold only moderately well, she has found success touring and opening for such artists as James Blunt and her former mentor, Blake Shelton.  Most recently, she wrote and performed tracks with rock violinist, Lindsey Stirling, and they are now touring together.

The Swon Brothers appeared on the fourth season of "The Voice" and eventually ended up in third place.  Their quirky country sound was a hit with audiences and they were signed by Arista Nashville almost as soon as the show ended.  They have not yet released an album or toured on their own yet, but they released their first single in November of 2013.  It has since sold over 100,000 copies, making it one of the more successful tracks released by artists from "The Voice" since the show began airing.

Simon Cowell left "American Idol" in order to bring his immensely popular, immensely glitzy, immensely overblown talent competition to the United States.  The "X-Factor" failed miserably and was cancelled after three seasons.  However, it did introduce American audiences to some genuinely talented people.

It seemed like a long-shot that an older country-crooner would win a hip talent competition like the "X-Factor", but that's just what Tate Stevens did during Season 2.  He went on to release his debut album under RCA Nashville in mid-2013, and it has since sold nearly 40,000 copies.

Alex and Sierra won the third and final season of "The X-Factor" in the US.  Their beautiful harmonies, good looks, and genuine affection for each other made them fan favorites from their audition, all the way to the last show.  Their debut album is set to drop in October of 2014.  They released their first single, "Scarecrow" in June of 2014, and it has since climbed to #117 on the US Hot 200.  How much they have earned is not yet available, but they are poised to become the most successful of the US "X-Factor's" winners.

Melanie Amaro went from sweetly dressed college student to full-on diva over the course of her "X-Factor" run in Season 1, eventually winning the multi-million dollar recording contract with Epic Records.  However, they have never released her album, which was primarily recorded back in 2012.  They have released two tracks, one of which, "Don't Fail Me Now", reached #8 on the Billboard Dance charts.  Besides an independently released track in 2014, she has not been heard of since her win.

Fifth Harmony was a manufactured girl-group, put together for Season 2.  However, they actually seemed to gel, and though they were picked on for not always doing so much harmonizing initially, they have since gone on to build a better sound and a loyal fan base.  Though they finished in 3rd place on the "X-Factor" they became the first "X-Factor" contestants to chart on the Billboard Hot 100 with their single, "Miss Movin' On".  The track has since reached #85 and been certified Gold.  Their first EP debuted at #6 on the Billboard 200 and #2 on the iTunes charts.

The a cappella competition series was a bit of an acquired taste and it only lasted three seasons originally.  It was subsequently brought back for one season in 2013.  All of the voices on the show were amazing, but a cappella pop and R&B is a hard sell.  Though the exposure for the groups was great, it was widely understood that the show probably wouldn't translate into major record sales.

All of the producers' beliefs regarding what an a cappella group could accomplish when it came to sales and touring were shattered by Pentatonix.  The five member group's innovative arrangements, excellent voices, and all around stage presence, made them popular with everyone.  Post-show, the group took YouTube by storm, and have since carved out a market for themselves.  They signed with Sony, and have released two studio albums.  Their debut album charted at #14 on the US Billboard 200, and their second album debuted at #10 on the Billboard 200.  They have sold over 500,000 albums worldwide and tour constantly.  Their success is a large part of the reason "The Sing-Off" was brought back for a fourth season.  No other groups from the show have achieved their level of success.