Julia Louis-Dreyfus Net Worth: Is The Veep And Seinfeld Star Really A Multi-Billionaire?

By Brian Warner on September 17, 2017 in Articles › Entertainment

Julia Louis-Dreyfus has lived (and continues to live) a truly exceptional life. She's an actress, comedian, producer, philanthropist, wife and mother. She's been on television for nearly 30 consecutive years without ever really having a career low-point. She was a castmember of Saturday Night Live from 1985-1987. She had an amazingly memorable small part in the 1989 movie Christmas Vacation. And then she became a household name thanks to her role on Seinfeld which ran from 1990 to 1998. Today Julia is the star of HBO's Veep which has been airing and cleaning up award shows since 2012. As of this writing, Julia has been nominated for nine Golden Globes, nineteen SAG awards and twenty two Emmys. She has won nine Emmys, one Golden Globe and seven SAG awards. She actually holds the record for most Primetime Emmy Award nominations and wins.

Outside of acting, Julia is married to comedian Brad Hall, whom she met while they were both studying at Northwestern. Brad was also a castmember on SNL. They were married in 1987 and together they have two sons, Harry and Charles. Charles became notable last year for being a walk-on for the Northwestern men's basketball team.

But exactly what is Julia Louis-Dreyfus' net worth? Is she really a billionaire? And where does that rumor come from?

Here's the deal – Julia was born on January 13, 1961 in New York City to an American mother named Judith and a French father named Gerard Louis-Dreyfus. Her parents divorced when she was just one year old and Julia was largely raised by her mother, at first in New York and later Washington D.C. after her mother married the dean of George Washington University.

The reason people think Julia is extremely wealthy is because even outside of her Seinfeld syndication money, her father was a highly successful financier. In fact, the entire Louis-Dreyfus family has been well-off for many decades.

Julia's great-great-grandfather was Leopold Louis-Dreyfus who founded the Louis Dreyfus Group in 1851. The Louis Dreyfus Group made a fortune in commodities trading and shipping. Today, the re-named Louis Dreyfus Company is a global conglomerate that has interests in finance, shipping, agriculture, hedge funds, telecommunications, real estate and more. The Louis Dreyfus Company is responsibly for an estimated 10% of the world's agriculture and is the world's largest trader of cotton, sugar and rice. The conglomerate is made up of more than 100 companies with offices all over the world, 22,000 employees an annual revenues exceeding $120 BILLION.

Julia's father Gerard was a chairman of one of the Louis Dreyfus Company's largest divisions, Louis Dreyfus Energy Services which specialized in crude oil trading, natural gas and infrastructure. At this time of his death in 2016, Gerard's net worth was $4 billion.

So does that mean Julia is a billionaire today? Technically, at this exact moment, Julia Louis-Dreyfus is not a billionaire. First off, her father left a widow, Phyllis B. Louis-Dreyfus, who controls the majority of his estate now. If Gerard did earmark his fortune for his children upon Phyllis' death, Julia will still have to split her inheritance with two siblings. When Rolling Stone Magazine once asked about Julia's future inheritance, she denied being a billionaire, but acknowledged that her father's business was indeed worth billions and that money could someday benefit her family. We peg Julia's current net worth at $200 million. 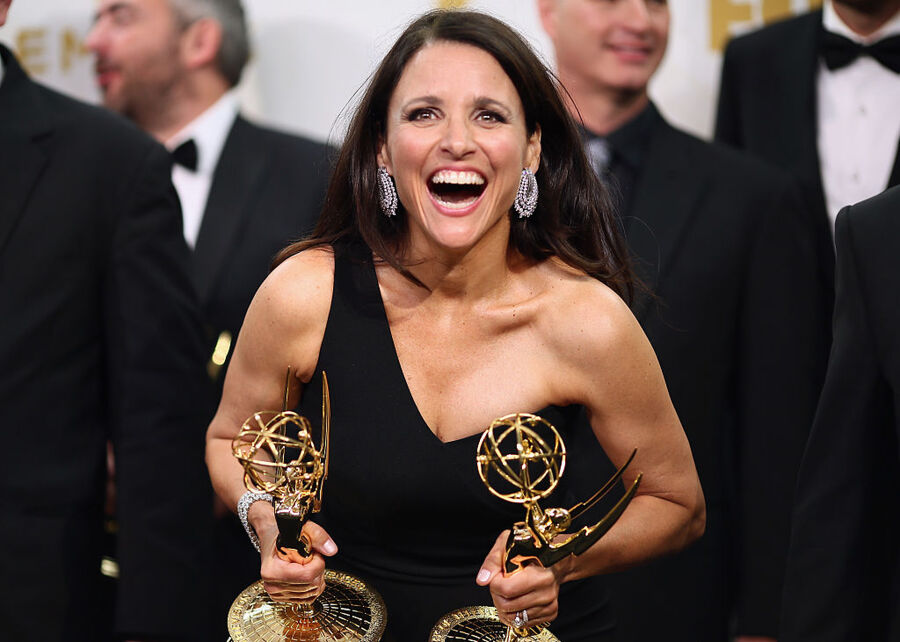 Julia's relatives still control the family business. Her father's cousin Robert was the chairman and CEO of Adidas from 1994 to 2004 and then retook the reigns at the Lois Dreyfus Group. Upon Robert's death in 2009, his widow Margarita inherited his estate and took control of the Louis Dreyfus Group. As of this writing she is worth $9.5 billion. Margarita and Julia are second cousins by marriage.