By Amy Lamare on December 4, 2020 in Articles › Entertainment

Juice WRLD, aka, Jarad Higgins is having a heck of a year, despite having lost his life last December to an overdose at age 21. He didn't live long enough to have the careers of other celebrities on this year's list of the highest-earning dead celebrities like Elvis, Kobe Bryant, or Dr. Seuss, but he's been raking in the cash since he overdosed on December 8, 2019. Streaming of his music spiked after he died, which was just nine months after the release of his second album "Death Race for Love." His third album, "Legends Never Die," was published after he died. The album debuted at number one on the Billboard 200. The album was the most successful posthumous chart debut in over 20 years and matched a record for the most top-ten song entries on the Hot 100 at one time. He brought in $15 million since his death, which was good enough to land at number seven on this year's list of the highest-earning dead celebrities.

Jarad Anthony Higgins was born in Chicago on December 2, 1998. He grew up in the suburbs of the south side of Chicago. His parents divorced when he was three and his father left the family. He was raised by his mom, who was very religious and conservative. She did not allow him to listen to hip hop music. He attended Homewood-Flossmoor High School. He was a heavy drug user. He began drinking lean/purple drank in sixth grade and began using Xanax and Percocet when he was 15. 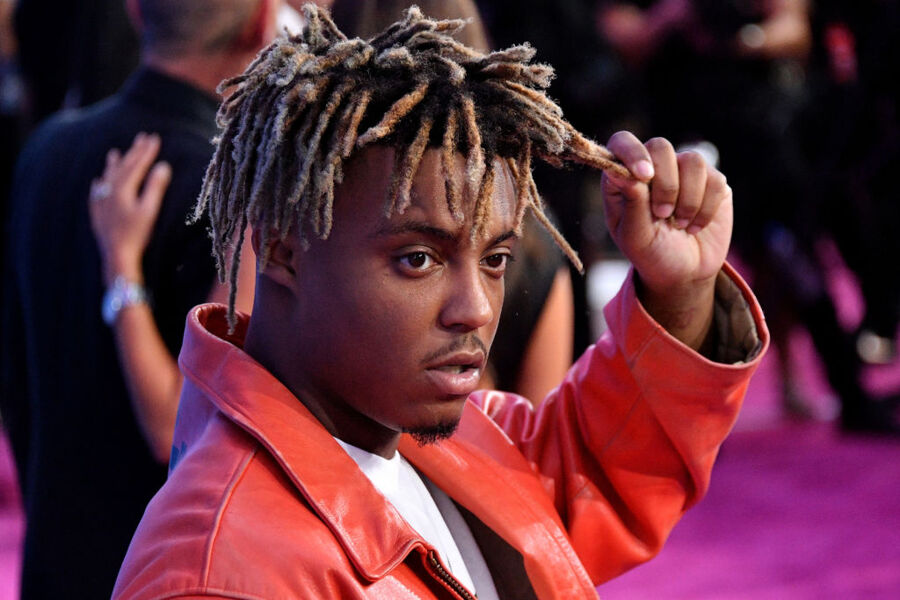 Juice WRLD learned how to play the piano at age four. Later, he took up the guitar and drums. He also played the trumpet in his school band. Even though his mother wouldn't let him listen to hip hop, he was allowed to listen to pop and rock music and through video games, Guitar Hero and Tony Hawk's Pro Skater which led him to discover Billy Idol, Black Sabbath, Blink-182, Black Sabbath, Fall Out Boy, Megadeth, and Panic! at the Disco. During his sophomore year in high school, he started posting his songs (which he recorded on his smartphone) to his SoundCloud account. This is when he began to take rapping more seriously.

On December 8, 2019, Juice WRLD was flying on a private jet from Van Nuys Airport in Los Angeles to Chicago's Midway International Airport. When the jet landed at Midway, police were waiting for it because they had heard from federal agents that there were guns and drugs on the plane. Juice WRLD reportedly took several unknown pills including multiple Percocet to hide them as police boarded the plane to search the luggage. Police found three handguns and 72 pounds of marijuana on the plane. Juice WRLD began convulsing and seizing. He was given two doses of Narcan as doctors suspected it was an opioid overdose. Juice WRLD was pronounced dead at a local hospital. He died as a result of toxic levels of oxycodone and codeine in his system. It was six days after his 21st birthday.

At the recent American Music Awards, Juice WRLD took home the award for Favorite rap/hip hop male artist. Juice WRLD is also being sued for copyright in which he has been accused of stealing a track from songwriter Nick Mira's "Ice" track for his 2018 song "Lean wit Me." Mira was a co-writer on the song "Goodbye & Good Riddance" from Juice WRLD's debut album. Mira also produced 2017's "Too Much Cash" for Juice WRLD. However, Mira registered his one-minute long song "Ice" with the Copyright Office in January 2019. Juice WRLD's song "Lean wit Me" came out in May 2018. The legal team for Juice WRLD has brought up the suspicious timing claiming its fraud upon the Copyright Office." Despite this, the legal case is moving forward in 2021.

Juice WRLD reportedly left behind 2,000 unreleased tracks. Marshmello also revealed that he and Juice WRLD collaborated on a number of not yet released songs. There are sure to be future albums from and featuring him that will keep him earning far past his untimely death.