Who Is Juergen Klinsmann And How Much Could He Potentially Make Winning World Cup?

By Paula Wilson on June 24, 2014 in Articles › Entertainment

Back in 2011, Juergen Klinsmann was considered a slightly controversial choice for taking over the US Men's Soccer team.  A highly successful German player who had done well coaching other European teams, the USSF saw him as a potential lifeline for a sport that has always struggled against America's other sports juggernauts – basketball, baseball, American football and, of course, women's beach volleyball.  Some questioned Juergen's reasons for choosing to take on the US team.  What did he know about galvanizing a comparatively new program?  He'd only ever been part of powerhouse football (soccer) teams.  Could he be trusted to lead a national squad that was only really starting to get its footing?  His reasons for choosing to take on the responsibility of leading US soccer are surprisingly wide-ranging, and include, among other things, a hefty price tag that had many people up in arms initially.  This is the story of how one of FIFA's "125 Greatest Living Footballers" became the head of the "little engine that could" – a.k.a the US Men's National Team, and just how much that cost. 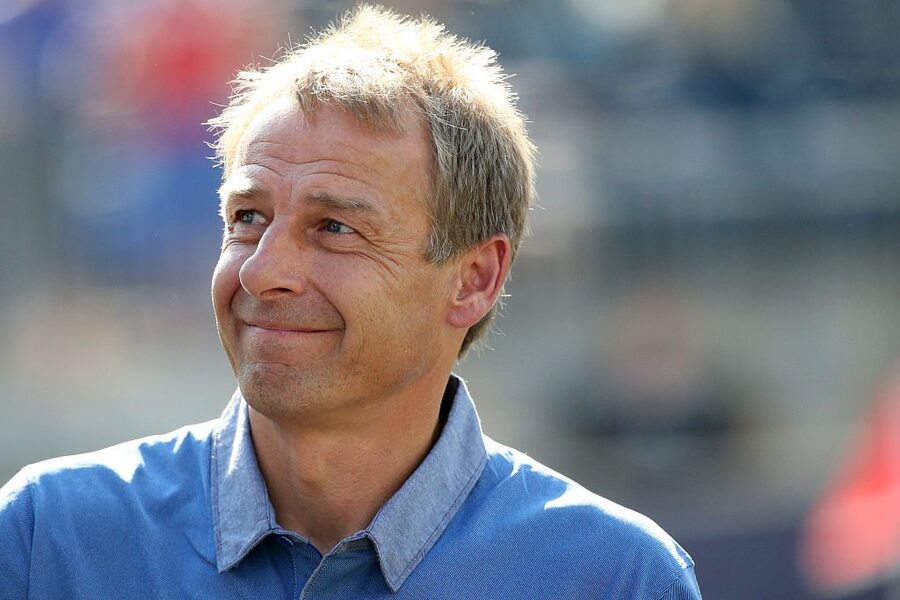 Juergen Klinsmann was born on July 30, 1964 in Goppingen, West Germany.  He began his youth career with TB Gingen when he was eight years old, and then went on to play for the youth teams of SC Geislingen and the Stuttgarter Kickers.  In 1981, he made the leap to senior level play with the Stuttgarter Kickers.  Over the course of the next 22 years, he would play for a variety of European teams, including VfB Stuttgart, Internazionale, AS Monaco, Tottenham Hotspur, Bayern Munich, and Sampdoria.  He also played very briefly for the Orange County Blue Star in the US in 2003.  He played for the West German National Team and the German National Team from 1987 to 1998.  As a player, he distinguished himself as one of Europe's best strikers, and scored in every major tournament that he appeared in between the UEFA Euro in 1988 and the World Cup in 1998.  He began coaching in 2004, taking over management of the German National Team.  After two years with Germany, he began coaching club team Bayern Munich.  While successful with Bayern, he clashed with management, and left partway through an otherwise highly successful season.  In 2011, he took the helm of the US National Team.

The story of how he ended up in the United States, after decades of success in Europe, is part love-story, part money-story.  While still a teenager playing for the Stuttgart Kickers, Klinsmann's coach told his players that if they finished the season in the Top 10, he would give them all 10 days in his house in Florida.  They came in eighth, and the whole group packed up and flew to Miami.  Klinsmann had never seen that level of wealth and ease ever.  He remembers saying, "My gosh, I didn't know that this kind of planet exists."  He knew he wanted to come back to the United States, so over the course of the next twenty years, he would find reasons to travel to the US whenever he had the time and the money.  He visited every large city he could, sleeping on acquaintance's couches, and traveling by bus or hitchhiking. 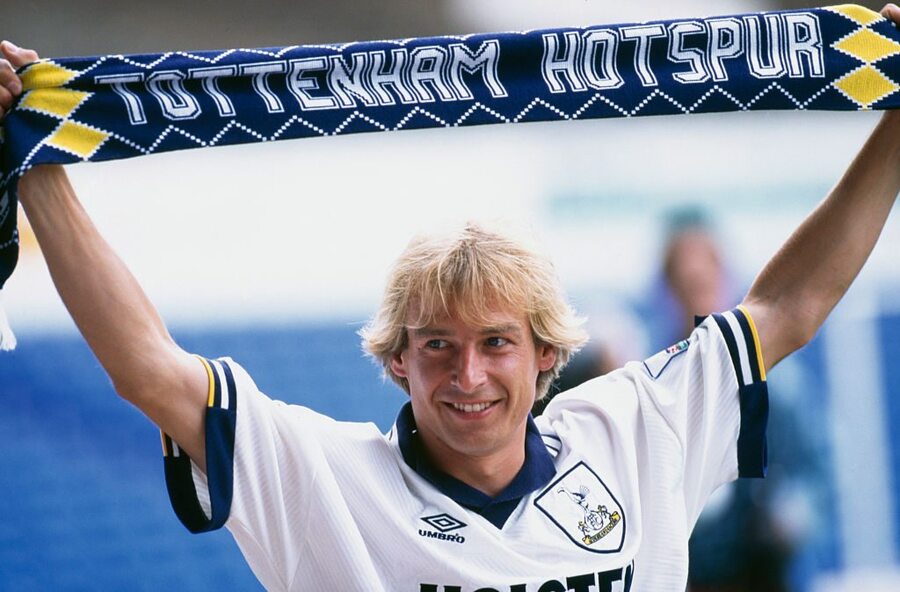 In the meantime, he continued to play better and better football back in Europe. But he always dreamed of returning to the United States somehow.  In the 90s, he met a model working in Europe.  They fell in love and got married.  His wife, Debbie Chin, was a California-native.  After he retired from professional level play in 1998, they moved to Orange County.  In 2004, when he was offered the chance to head up the German National Team, he agreed.  However, he had no interest in living in Germany.  Instead, for the next two years, he commuted between California and Germany to coach.  His revamping of the German National Team made him the focus of an extreme level of criticism, a great deal of which was aimed at his unwillingness to live in Germany.  However, his critics were silenced when Germany played exceptionally well at the 2006 World Cup, eventually finishing in third.  He was offered the opportunity to renew his contract, but chose to decline.  He said he missed his family and a normal life.  In addition to coaching, he was also an apprentice baker, and his family owned a bakery in Stuttgart.  During the World Cup, the bakery was overrun with members of the press.  He had no desire to subject any of his family members to that level of scrutiny again.

However, he was lured back to coaching in 2008, and spent a year with Bayern Munich.  This time he lived near the team.  He was quite successful, but problems with the board of directors led to him terminating his contract and returning to sunny California.  Then came the offer to coach the US National Team in 2011.  As the coach of the German National Team and Bayern Munich, Klinsmann was accustomed to making over $3 million a year.  The US National Team had been paying outgoing Head Coach, Bob Bradley, a base salary of $450,000 with bonuses that brought his total compensation in a good year up to right around $800,000.  By comparison, the coach of the US National Women's Team, which had won the Gold at the 2008 Summer Olympics and finished second at the World Cup in 2010, earned a grand total (salary and bonus) of $190,000 per year.  Comparatively speaking, Klinsmann's asking price was astronomical.  His asking price would be more than three times what the previous men's coach earned for delivering an arguably mediocre performance. It would be 15 times what the women's coach earned for bringing home the Gold!

Somehow, the USSF came up with the money.  They offered him a base salary of $2.5 million.  He accepted.  He now had exactly what he always wanted, a complete life in the United States.  The German man, who his friends always joked was more American than German, had truly arrived.

Klinsmann's price tag was especially tough on the USSF, because they were contractually obligated to continue paying Bob Bradley since they terminated his renewed four-year contract after only one year.  However, Klinsmann is earning his fee and has done what he does best.  He came in, revamped the US National Team, and over the last few years, has vastly increased interest in US football (soccer) across the nation and around the world.  The US Men's National Team won the 2013 CONCACAF Gold Cup making it clear that they were really ready to emerge on the world stage.  Though he reportedly had little hope for the team at the 2014 World Cup, his leadership has led them farther than anyone expected.

Depending on how far the US team makes it in Brazil, Klinsmann has the potential to earn some very lucrative bonuses. Based on what he has achieved as of this writing, he will likely take home a minimum bonus of $500,000. If the US Men's team somehow miraculously wins the World Cup, Klinsmann will earn $10.5 million in bonuses. By the way, that's more than Ghana budgeted for the entire tournament including all bonuses, salaries and travel expenses.

The German player who used to drive a Volkswagen Beetle with a Snoopy bumper sticker that read, "Is it much farther to America?", in German, has seemingly become the US National Team's secret weapon.  How far the team will go, and how much money he, and US Men's soccer in general, stand to make, remains to be seen.