By Brian Warner on April 9, 2014 in Articles › Entertainment

It's a good thing 50 Cent is extremely rich, because a judge in Florida just dropped a financial bomb on the Queens-born rapper/entrepreneur. This judgment finally settles a legal battle that has raged between 50 Cent, AKA Curtis Jackson, and a headphone company called Sleek Audio for the past two years. The original lawsuit alleged that 50 Cent (who is still technically a partner in Sleek Audio) stole extremely valuable trade secrets and technology to launch a competing line of headphones through a newly formed company (that he majority owned) called SMS Audio. In 50's counter suit, he claimed that Sleek Audio's directors badly mismanaged his investment to the point that the company was completely insolvent well before he decided to launch SMS Audio. Unfortunately for Mr. Jackson, an arbitration judge in Florida today sided with Sleek Audio's version of the story and subsequently ordered him to pay his former partners $16 million in damages… This story has some really interesting twists and turns. I'll summarize the juiciest details below… 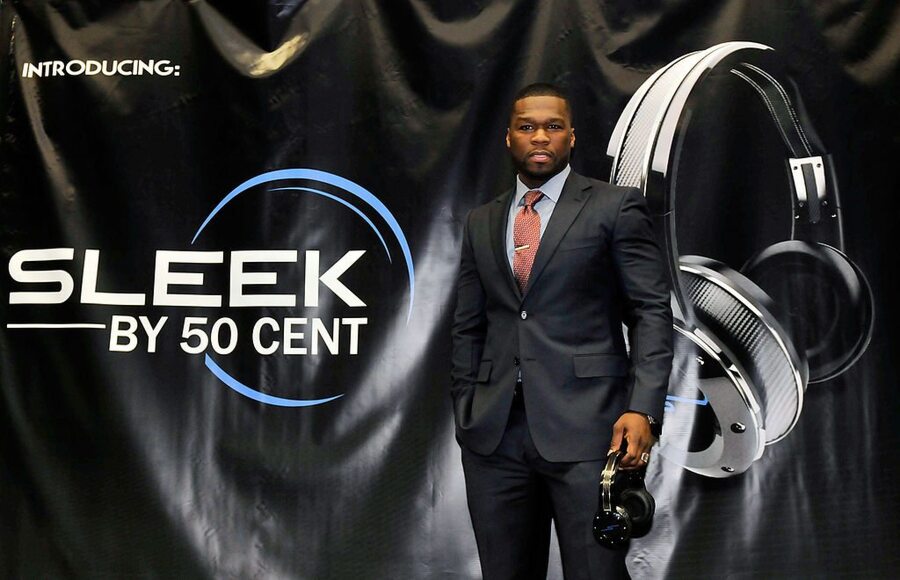 50 Cent is a very entrepreneurial person. Last month when we released our annual list of the richest rappers on the planet, 50 came in at #5 with a personal net worth of $270 million. And as you may know by now, a large chunk of his wealth actually comes from a shrewd investment in Vitamin Water. Back in 2006, 50 Cent negotiated a 5% equity stake in Vitamin Water in exchange for appearing in their commercials. When Vitamin Water sold to Coca-Cola for $4.1 billion in cash, 50 took home more than $200 million.

Coming in two notches above 50 Cent on our list of richest rappers was Dr. Dre, who is currently worth $500 million. In the last several years, no rapper has made as much money as Dr Dre thanks to the exploding success of his headphone company Beats By Dre. Last year alone, Beats by Dre is rumored to have generated over $1.4 billion worth of revenue. If the company goes public in the near future, Dre's 25% ownership stake is expected to be worth $1-2 billion.

After seeing Dre's unimaginable success with Beats, you can understand why 50 Cent wanted to get into the headphone market as fast as possible. In January 2010, 50 took a meeting with a group of executives from a company called Sleek Audio. Sleek Audio was founded in 2006 by a Florida-based engineer/inventor named Mark Krywko. The company initially set out to revolutionize the hearing aid industry by creating a device that could be custom fitted to the inside of someone's ear. Pretty soon, Sleek made the leap into the headphone market. The company made waves at CES in 2009 with their in-ear headphone, the "SA6". The SA6 won an Innovations Honoree award at CES for being the first ever in-ear turnable headphone. Things seemed to be going great with Sleek Audio, except for one major problem. They were totally out of money.

After their meeting in January 2010, 50 Cent agreed to invest $1.3 million into Sleek Audio. Sounds great, right? Well, with his investment 50 included one important condition: Even though Sleek Audio had only ever created in-ear headphones, 50 insisted that they start creating outer-ear headphones. He wanted his product to resemble Beats by Dre. He wanted headphones big enough that they could be emblazoned with a G-Unit logo so they would be worn more like jewelry than a functional audio accessory.

This is where we run into our first major problem. At this point in the story the Sleek Audio people claim that it was understood that they would need an additional $3-5 million in funding, on top of the $1.3 million, in order to start essentially from scratch and create an outer-ear headphone prototype. 50 Cent claims that he was under the impression that his original investment alone would be more than enough.

Almost exactly one year after striking their deal, 50 Cent stood side by side with Sleek's executives at the Consumer Electronics Show (CES) in January 2011, to officially unveil the "Sleek by 50" over the ear headphones. The "Sleek by 50" headphones featured a revolutionary innovation called a "Gimble Mechanism" that prevented the inner earcup from rattling when they were shaken, for example through the act of jogging. The Gimble Mechanism also was assembled in a way that allowed for maximum volume and deeper bass at high levels without causing distortion. These innovations were completely unique to the headphone industry before this point. 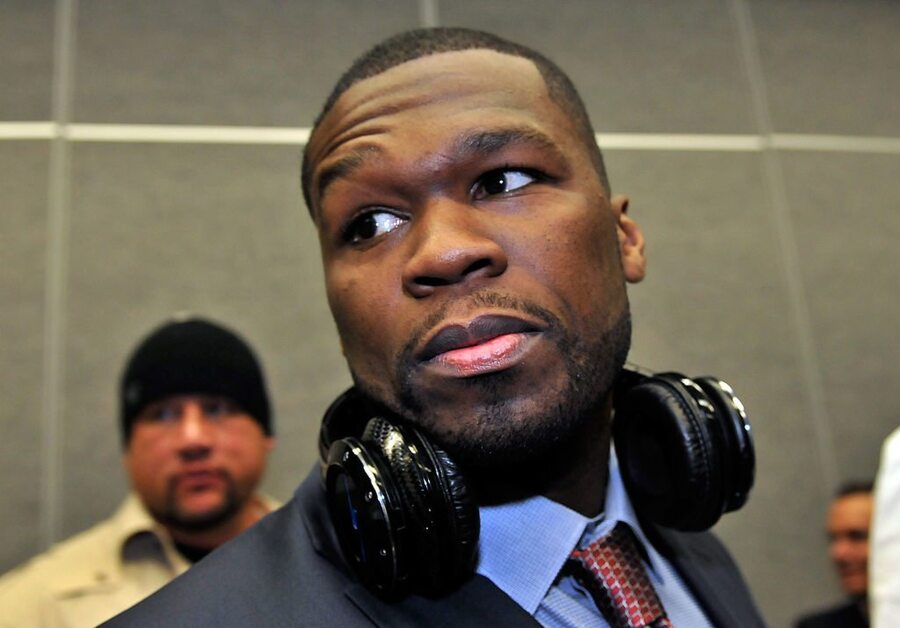 Just before CES, Sleek also launched a basic promotional website that teased the upcoming release of the Sleek by 50 and solicited customer emails for people who wanted to buy a set when they were available. Both the Gimble Mechanism and website email addresses will become important very soon.

A month after CES, in February 2011, things start to get a little contentious between 50 Cent and his partners at Sleek. On February 9, one of 50's employees emailed Sleek asking for the password to the website's backend. The password was given because this person was presumably working WITH Sleek not against. Later that day when the same Sleek employee checked the website, he discovered that all 3600 email addresses had been erased from the database. He immediately contacted 50's management company but received no response.

Thanks to legal documents that were just released, we can now read an internal email sent from 50 Cent's business manager Nicole Martin to various employees in relation to the disappearing email addresses. In her email, Nicole says: "Sleek is onto us, LOL. They emailed and called … about the data." To which an employee replied "Tell him something like, sorry, you just have to finish editing a video for 50 or something, we'll get to it, LOL!"

After CES, Sleek was completely out of money. Company executives were under the impression that this was just step one and that they were just waiting for more money to keep going. 50 thought the company had failed and he was free to move on. They officially announced their split May 2011. One major problem for 50 Cent is the fact that emails were discovered that revealed he had been working with SMS Audio as early as April 2011, a month before the split. Around this same time, 50 Cent just happened to hire away the same designers who had previously created the Sleek by 50 headphones to work at SMS Audio.

When Sleek Audio got wind of what was transpiring, they were obviously not pleased. From Sleek's perspective, 50 Cent was not only their main investor, but he was a company Board Member. Technically speaking, 50 Cent is still a Sleek Board Member to this day. From 50's perspective, Sleek had burnt through all of his original investment and was essentially insolvent. He believed this freed him up to seek new opportunities. That may have been true, but that didn't entitle him to use any technology, design or trade secrets from Sleek in his new venture.

Lawsuits began to fly. The CEO of SMS Audio vehemently denied accusations that they stole technology from Sleek and insisted that their entire prototype was built from scratch, 100% independently. When Sleek's lawyers pointed to the Gimble technology that magically appeared in SMS's headphones after less than a month of research and development, the CEO claimed you could find that technology in thousands of headphones on the market at that time. When the CEO was pressed to produce some examples, he could not provide a single one. It was also pretty hard to explain away how 3600 customer emails disappeared, especially in light of the internal exchanges that eventually came to light.

After more than two years of back and forth lawsuits, a Florida judge finally ruled in favor of Sleek Audio. The judge ordered 50 Cent to personally fork over $11,693,247 in damages to Sleek plus an additional $4,488,331 to cover their legal fees. That comes to $16,181,578 in fees and damages. Assuming 50's own legal fees were comparable to what Sleek spent over the years, it's likely that this whole headphone fiasco could personally cost him roughly $21 million. Even for a guy who is worth $270 million, that's a pretty painful blow to the wallet. Perhaps more importantly, this whole ordeal has been an extremely painful blow to 50's ego. There's also no word yet on whether on the future prospects of SMS Audio. Given this black eye and the continued success of Beats by Dre, this might be a difficult setback to overcome.

Hat tip to RadarOnline for finding the court documents and breaking this story.