By Brian Warner on June 3, 2015 in Articles › Entertainment

When you're the CEO of one of the largest banks in the world, you probably don't have very many bad days. Ok, sure, you might have the occasional Congressional hearing or two. But other than that, on 99.99% of your other mornings, you probably wake up laughing because your life is so awesome. Why is the life of a bank CEO so awesome? Because, if you're a guy like Jamie Dimon from JP Morgan or Lloyd Blankfein from Goldman Sachs, you literally operate an enormous money printing machine. All these guys have to do is make sure that money machine keeps running 365 days a year and they will be rewarded extremely well. For Jamie Dimon, as you're about to learn, that word "extremely" is taken to especially extreme levels.

Earlier today, it was revealed that thanks to JP Morgan's soaring stock price, Jamie Dimon's personal net worth had officially crossed into billionaire status, $1.1 billion to be precise. This is significant because despite that fact that they are all extremely well paid, most bank CEOs struggle to become anywhere close to achieving billionaire status. Hedge fund managers earn (and lose) billionaire status all the time because they are founders. They are also typically making huge bets with their own money. Jamie Dimon is essentially a hired hand. A guy plucked from the crowd and paid a salary. 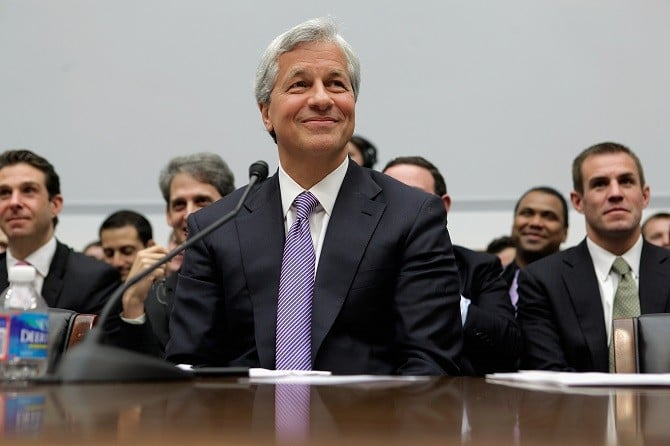 So what is different and special about Jamie?

Mr. Dimon's career started at American Express, in 1982. Fresh out of business school, he was hired by his future mentor, Sandy Weill. Over time, Sandy and Jamie became an unstoppable duo within Amex. They were so successful together that they soon left Amex and acquired control of a Baltimore-based bank called Commercial Credit. Over the next 10 years, they went on an acquisition spree. In 1998, they pooled all of their acquired resources into one company which they called Citigroup.

Soon after the formation of Citigroup, Jamie was forced out by Sandy. Upon leaving the company, Jamie sold 2.3 million Citigroup shares for a pre-tax profit of $110 million.

In 2000,  Jamie became CEO of Bank One which was eventually sold off to JP Morgan. In 2005, he was appointed CEO and Chairman of JP Morgan, a position he has held for the last 13 years.

During his time at JP Morgan, Jamie has earned approximately $120 million in salary and dividends. He has also been generously awarded with stock. According to the company's most recent filing, Jamie owns 6.1 million shares of JP Morgan, which at the most recent trading price of $66/share are worth $404 million. Jamie also owns an additional $80 million worth of exercisable options, for a grand total value of $484 million.

BTW, at the lowest point of the 2008 recession, Jamie's JP Morgan stock holdings were worth a little less than $100 million.

Outside of stock investments, he owns $30 – $40 million worth of real estate, including a Park Avenue apartment and a 30-acre property in Bedford Corners, New York.

According to Bloomberg, Jamie's non-JP Morgan related financial assets are currently worth slightly north of $500 million. When you total it all up, Jamie's current net worth is $1.1 billion.

So what's the lesson here? When I was in college, getting a job at JP Morgan or Goldman Sachs was the ultimate dream that basically only the smartest kids actually achieved. I got rejected from both over and over. That was 10 years ago. In retrospect, if I had worked at either of those companies for the last decade, I guarantee I would not have as much money as I do today as the owner of CelebrityNetWorth. What's the difference? I own CelebrityNetWorth. There's no chance I ever would have owned any significant piece of an investment bank, unless I started one of my own like Jamie Dimon did. So once again, if you want to be rich, you gotta be an owner!