By Brian Warner on March 10, 2017 in Articles › Entertainment

Hypothetical question: Pretend you inherited billions of dollars from your parents and today you have a luxurious life filled with multiple mansions around the world, private jets, expensive jewelry, fast cars and lavish parties. Sounds fun doesn't it? How would you feel if you found out that your entire fortune exists because your grandparents had very close ties to the Nazi party, the German industrial war effort and possibly slave labor? Could you live with yourself? Maybe you'd donate all or some of the money to charity. Maybe you wouldn't care at all and you'd just go on living the dream. That's pretty much the exact story for the family of German billionaires who happen to be the step-grandchildren of Nazi propaganda minister Joseph Goebbels, arguably one of the most evil people in history. Two of Goebbels' step-grandchildren are not only billionaires, but they are among the richest people in Germany and today own nearly 50% of automaker BMW. This story is fascinating and a bit complicated, but bare with me because it's definitely worth reading all the way through. 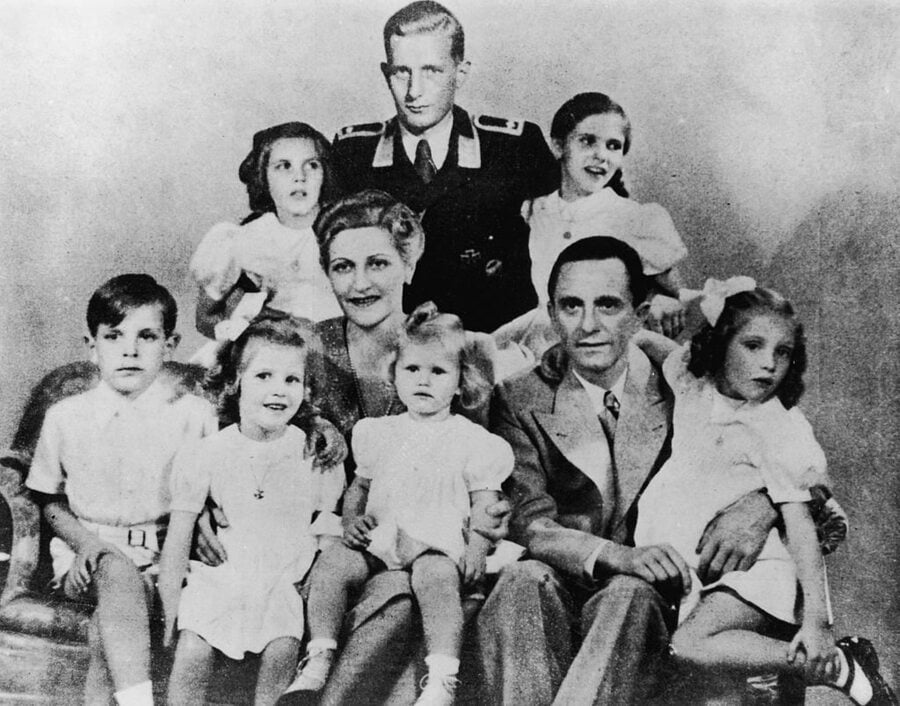 In the photo above you see Nazi propagandist Joseph Goebbels with his wife Magda and their six young children. The man in the military uniform standing in the center of the photo is Magda's son Harald Quandt, from her previous marriage to German industrialist Guenther Quandt. In case you were unaware, Joseph Goebbels was Hitler's right hand man. He was in charge of all Nazi propaganda that included burning of books, destroying synagogues and the general persecution of Jews. While hiding out in Hitler's bunker towards the end of the war, Joseph and Magda murdered their six young children with cyanide pills then committed suicide themselves. The elder son Harald Quandt learned of his family's disturbing demise while serving time in an Allied POW camp in 1947.

Long before World War II, Guenther Quandt (Harald's father) turned an unexceptional family textile business that he inherited from his father Emil Quandt, into one of the earliest German industrial business empires. During World War I, Guenther's company became the largest clothing manufacturer in Germany by producing military uniforms. When WWI was over, Guenther, who was flush with cash, bought a company that made batteries, a company that made sewing machines, a silverware manufacturer and a large stake in car maker Daimler (modern day Mercedes/Chrysler). Guenther was married to a woman named Magda Ritshcel from 1921 – 1927. Guenther had a son from a previous marriage named Herbert before he and Magda welcomed their son Harald. Two years after their divorce, Magda married and would eventually have six children with Nazi propaganda minister Joseph Goebbels. When Magda and Joseph got married, Adolf Hitler served as best man. During World War II, Guenther's companies capitalized on many war time opportunities. They produced batteries for German submarines, firearms, ammunition, missiles and rocket launchers. There was just one problem. During the war the company's growth was primarily fueled by 50,000 slave laborers including POWs and members of concentration camps.

When Hitler committed suicide on April 30, 1945, Joseph Goebbels became Chancellor of Germany. It was a title Goebbels held for just one day before he and Magda murdered their six young children and committed suicide themselves. Before committing suicide, Goebbels sent his stepson Harald the following note: "It's likely that you'll be the only one to remain who can continue the tradition of our family." After the war, Harald was released from the allied POW camp and Guenther spent time in an internment camp for Nazi sympathizers. Seven years later, Guenther Quandt died and left his thriving empire to sons Harald and Herbert. Harald and Herbert spent the next decade expanding the empire to incredible heights. Herbert purchased 46.7% of BMW in the early 1960s. Harald sold the family's 14% stake in Daimler to the Kuwait Investment Authority for $1 billion in 1974.

Fast forward to the present and both Harald and Herbert's surviving children are among the richest people in Germany. Harald's four surviving daughters inherited $760 million when their mother died in 1974. After thirty-two years of smart investments, the four sisters today share a fortune that has ballooned to $6 billion! And believe it or not, they are the poor side of the family. Today, their two cousins Stefan Quandt and Susanne Klatten (Herbert's children), still own 46.7% of BMW. That stake is worth an astonishing $25.8 billion today!

So how would you feel if you were one of Harald and Herbert's billionaire children? Would you feel bad that your fortunes were very likely built on the backs of slave labor and prisoners of war? Would you give your money away or would you let bygones be bygones?