Before Being Retired, The Dos Equis Guy Was Making $1 Million Per Year For 5 Days Of Work Per Year!

By Beth McDonald on March 15, 2016 in Articles › Entertainment

After nearly a decade of telling viewers to "stay thirsty, my friends," Jonathan Goldsmith, the actor playing the "Most Interesting Man in the World," is being retired from the famous Dos Equis beer ad campaign. Dos Equis recently released his last television ad, in which he and a lovely blonde board a one-way space rocket to Mars.

According to Dos Equis Vice President for Marketing, Andrew Katz, while the "Most Interesting Man" campaign will continue, it will do so with a different and probably younger actor in order to stay relevant to younger Millennial consumers. "Culture has changed very dramatically," said Katz recently to USA Today. "Our Millennial drinker has changed quite dramatically, and the competition has only exploded with the advent of craft [beer]. We just want to make sure that the [Most Interesting Man] story evolves."

Since their inception, the irreverent and playful commercials featuring the impossibly suave and talented older gentleman who is so interesting that "he's won the same lifetime achievement award twice," "sharks have a week dedicated to him," and "his mother has a tattoo that reads 'son'" have become iconic, creating a cult following and spawned hundreds, if not thousands of parodies, Internet memes, and Halloween costumes over the years.

More importantly, the commercials have significantly increased sales and consumer awareness of the then little-known Dos Equis brand.  Since the campaign was introduced in 2006, Dos Equis has almost tripled its business, with the number of cases shipped between 2007 and 2015 increasing by almost 35%, according to USA Today. Furthermore, Heineken, which owns the brand, believes that 25% of overall future growth of the company will be due to continued growth in the Dos Equis brand.

Goldsmith's role as the "Most Interesting Man" in garnering increased sales for Dos Equis has not been lost on the beer brand, with Dos Equis reportedly paying him almost $1 million per year for shooting just a handful of commercials. The commercials would take 5 days per year to film. So he basically got $1 million per year to do 5 days of work each year. His stint for Dos Equis, as well as a long career in in acting and other businesses has allowed him to rack up a net worth of $8 million.

Goldsmith believes the ads were so successful over the years for the simple reason that the character made people smile. "There is a real connection with the fun and authenticity of the character, which I portray with the same joy and passion that is part of my own life," he said recently to USA Today. 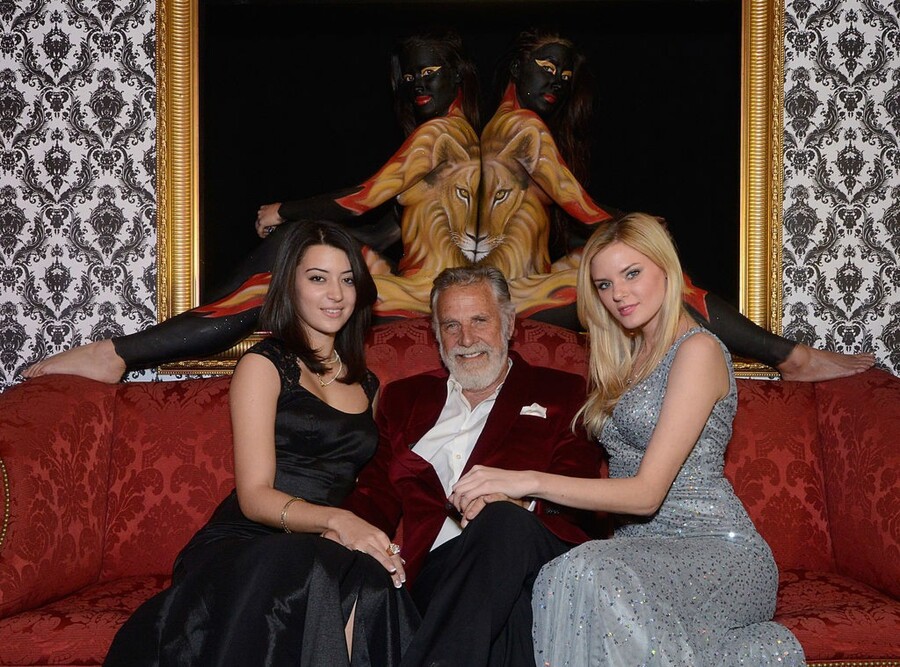 Similar to his character, Goldsmith has led an exceptionally interesting life. He began his acting career in the 1950s – so poor he drove a garbage truck on the side just to pay the bills. According to NPR, after some time, he began to land bit parts, mostly in western movies, alongside big names like John Wayne and Clint Eastwood. He even competed for a role with Dustin Hoffman. Although he wanted to do comedy, he was repeated typecast as the villain.

After several decades, work began to dry up for the aging actor. He quit Hollywood started his own network marketing business, according to The New Yorker. Despite many years of success, his entrepreneurial career ended after a lawsuit against his partner and his company wiped him out. Needing cash, he decided to return to his acting roots, ultimately landing his iconic Dos Equis gig.

Since then, Goldsmith has used his Dos Equis fame for raising awareness on a variety of issues and charities, and has helped charity groups remove landmines from Cambodia, rescue tigers, educate prisoners, and raise funds to support at-risk youths. According to Business Insider, he's also personally saved the lives of three people, including a girl that was drowning in the water near a Malibu beach and a hypothermic man stranded on Mount Whitney in California.

While no one knows what retirement will bring for the 77-year-old actor, if the life he's lived thus far is any indication, we're positive it will remain "interesting."