By Brian Warner on March 9, 2014 in Articles › Entertainment

Before David Letterman, Conan, Jay Leno, Jimmy Kimmel, Jimmy Fallon and Craig Ferguson there was one undisputed king of late night comedy: Johnny Carson. Johnny Carson reigned over The Tonight Show for 30 straight years, from 1962-1992, and is widely considered the greatest television host of all time. Comic greats like Jerry Seinfeld and Drew Carey trembled in Johnny's presence and owe their entire careers to his couch. Johnny won countless awards including six Emmys, a Peabody and the Presidential Medal of Freedom. As if all that wasn't enough, he was also one of the most privately philanthropic celebrities in the history of Hollywood. During his lifetime Johnny donated millions of dollars to various charities without seeking an ounce of personal attention or publicity. When Johnny died in 2005 he donated an unknown portion of his net worth to The Johnny Carson Foundation. No one, including the foundation itself, had any idea how large the donation was until 2010 when his lawyer and accountant were required to reveal the full amount in an IRS tax return. To everyone's amazement, Johnny Carson left a surprisingly massive fortune to charity…

Johnny Carson's career in show business actually began in radio, not television. After serving in the Navy during World War II he returned home to attend the University of Nebraska where he graduated with a degree in radio and speech. After college he began hosting a radio show at a station in Omaha. Johnny quickly gained a local fan base and was eventually invited to make appearances on the station's television network. In 1951, he moved to Los Angeles where he landed a gig hosting his own radio show called Carson's Cellar on a station called KNXT. Again he gained a cult local following and two years later he was hired as a writer on Red Skelton's TV show. Between 1954 and 1962, Johnny hosted a variety of short lived television programs and game shows like "Who Do You Trust", "Earn Your Vacation" and "To Tell The Truth". In January 1962, Jack Paar announced he was stepping down as host of The Tonight Show. Johnny was NBC's first choice to take over as host, but he declined because he was nervous about having to interview celebrities, something he had never done. NBC spent months looking for a replacement and were rejected by dozens of popular comedians. They finally went back to Johnny and convinced him to give it a shot. The Tonight Show with Johnny Carson premiered on October 1st, 1962.

Johnny's version of The Tonight Show was an instant hit with audiences. Over the next 10 years the show grew to become one of the most watched programs on television averaging around 11 million viewers per night. By 1975, it was the most profitable show on television earning NBC $50-60 million every year. That's the inflation adjusted equivalent of $210-$260 million today. In 1975, Johnny was the highest paid entertainer in the world with an annual salary of $4 million ($17 million today). In 1980, Johnny negotiated an extremely lucrative deal with NBC that gave his company, Carson Productions, ownership of not only his show, but also of Late Night with David Letterman which ran on NBC from 1980-1992, before he jumped to CBS. By 1991 Johnny's annual salary rose to $25 million per year (equal to $40 million today). 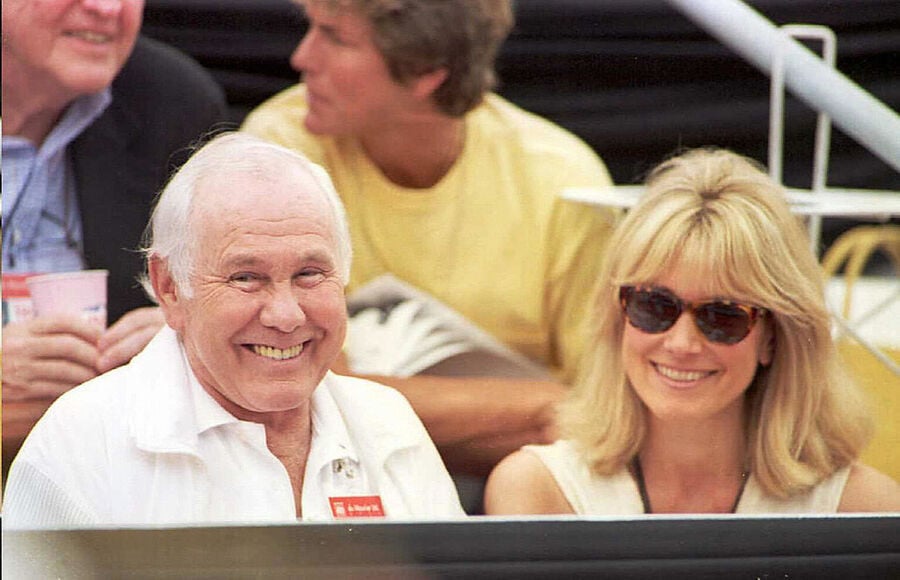 Outside of television Johnny was an active investor and entrepreneur. Jonny Carson Apparel produced a popular line of pants and turtlenecks. He purchased and later sold two television stations and was one of the largest individual investors in the failed DeLorean Motor Company. Johnny also owned an extremely valuable real estate portfolio that included a 16 bedroom, four acre ocean-front compound in Malibu and a 14,000 square foot mansion in Beverly hills. His widow would eventually sell both properties for $40 million and $15 million, respectively in 2007. Johnny was married four times and in 1985 had to pay his third wife a $20 million divorce settlement ($43 million in today's dollars) after a lengthy and expensive court battle that resulted in an 80 page settlement document. In the 1970s, he paid his second wife a $500,000 lump sum and agreed to provide her $75,000 a year for life.

Throughout his life, Johnny privately donated millions of dollars to a wide variety of charities. His donations were largely made away from the public eye through the John W. Carson Foundation. After receiving a $5.3 million donation in 2004, his alma-mater the University of Nebraska re-named their performing arts department the Johnny Carson School of Theater and Film. The school received another $6 million upon his death. Johnny's hometown in Norfolk, Nebraska named a hospital, museum, community college, library and high school in his honor after receiving large gifts.

Sadly, Johnny died in 2005 at the age of 79 after suffering a three year battle with emphysema. Prior to his death, Johnny had been giving the Johnny Carson Foundation annual gifts of $1 – $2 million. Upon his death, the foundation was told that it was the beneficiary of a trust from Johnny's estate. The value of the trust remained a secret for five years until his lawyers were required to disclose the assets in an IRS tax return. On August 30, 2010, The Johnny Carson Foundation discovered that the value of their trust fund was worth an astonishing $156 million! At the time, the trust fund contained $35 million in cash and $121 million in securities and royalty rights. Fast forward three years and the value of the trust has grown to nearly $200 million. That's enough to make it the largest (entertainment) celebrity foundation in the world, trumping media mogul David Geffen's $80 million charity. Johnny's will also left $4 million to the Los Angeles Children's Hospital. The only celebrity who perhaps beats Johnny is Paul Newman, whose Newman's Own food company has donated $370 million to various charities since its formation in 1982.

Heeere's Johnny! A great human being.