Last Week Tonight host John Oliver has never been one to shy away from big issues. His HBO show has delved into topics like NCAA athlete pay, government surveillance, greedy preachers, and abortion laws. His most recent target? Shady debt buyers.

Citing a statistic that American households collectively owe over $12 trillion in debt, Oliver explained that $436 billion of that debt is seriously delinquent, meaning it's 90 or more days past due. He added that nothing is good when it's that late, giving the example that if a pregnant woman was three months overdue, she'd "effectively just be giving birth to a floppy toddler."

While some people get into debt due to poor spending habits, others simply can't avoid it. He gave the example of Bob Weinkauf, a man who went to the hospital for breathing trouble a few years ago. After being in intensive care for four days, the hospital informed his wife that their insurance wasn't going to cover the cost. Bob and his wife Becky were $80,000 in debt because they wanted to make sure Bob could continue to breathe.

For some companies, they can make a lot of money buying people's debts. One such company, Encore Capital, claims one in five consumers either owes them money currently, or has in the past. Oliver broke down how debt buying works: 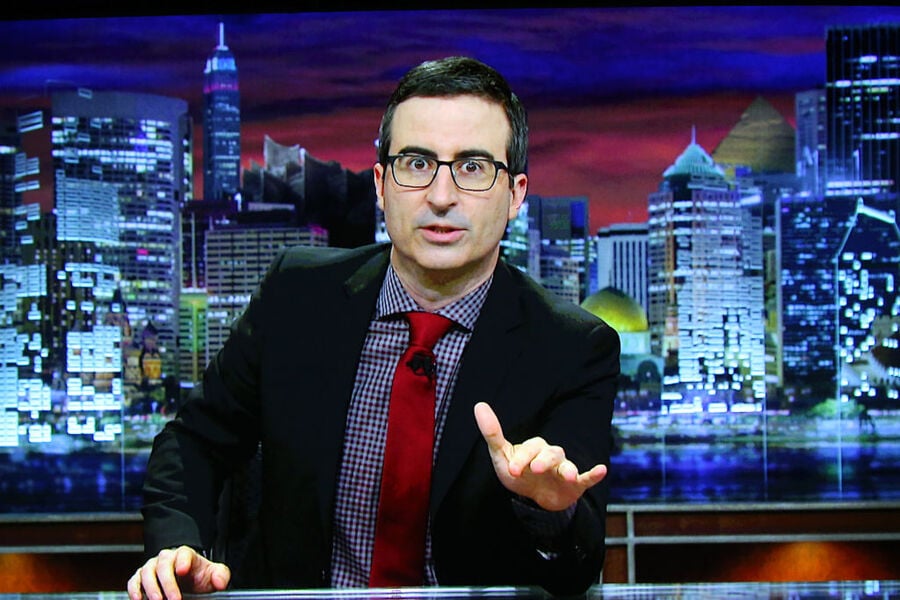 Oliver noted that these transactions are often riddled with incorrect information, and it's resulted in problems for those that end up with the debt. The wrong person could be accused of owing money, or they could face "zombie debt," debt that was thought to be dead that comes back to life. No word if this debt will get a starring role on the next season of The Walking Dead.

Collectors aren't always helpful, either, and are sometimes downright nasty. Oliver played clips of collectors threatening to kill the debtor, wake up their entire building if they refused to pay, and arrest, shoot and eat the debtor's dog. Responding to the latter, Oliver suggested it was impossible because the handcuffs would just fall off the dog's paws, since they don't have wrists. Other collectors will pick up debt only after the debtor is deceased.

Despite operating outside of the law, some debt buyers are no strangers to the courtroom, filing more suits than any other type of plaintiffs, in some cities. Since there are so many cases, they usually don't get reviewed extensively. In these suits, not only is the debtor now owing money to a debt they may never have been associated with, they'll also owe money in court fees, if they appear in court. According to Oliver, there's a reason these debt buyers file so many cases: 90 to 95 percent of defendants don't show up, meaning the debt buyers win by default. And in many states, a victory by default means debt buyers can garnish wages directly.

It's an unfair situation for many people who aren't able to pay up, so Oliver took it upon himself to help them out: he started a debt buying company called Central Asset Recovery Professionals, or CARP, "after the bottom-feeding fish," saying it was "disturbingly easy" to do so. The company then purchased and forgave $14,922,261.76 of medical debt owed by nearly 9,000 people. That's nearly $15 million of debt gone, which is the biggest one-time giveaway of any TV show in the history of television.

Of course, Oliver had to get a little dig in at Oprah: after showing a clip of her giving away cars to the audience (the previous record holder), Oliver quipped, "F*** you, Oprah" and proclaimed himself "the new queen of daytime talk."

Check out the full video below: