Jennifer Lawrence: The 23-Year Old Oscar Winner Worth $25 Million Who's Keeping Tinseltown on Its Toes

By Paula Wilson on January 23, 2014 in Articles › Entertainment

Jennifer Lawrence has taken Hollywood by storm in a way that no other actor or actress has in decades.  Her undeniable talent, down-to-earth behavior, and genuinely hysterical interviews have made her a favorite with audiences, other actors, and most importantly, the Hollywood press.  She's starred in big budget hits, and turned in critically-acclaimed performances in smaller projects.  She has been nominated for three Oscars and won one.  At just 23, she is the youngest person to have received that many nominations in the history of the Oscars.  With a net worth of $25 million and acting work booked through 2015, Jennifer Lawrence is rapidly becoming Tinseltown royalty.  Though her current life is full of glamour, glitz, and celebrity parties, it was not that long ago that Jennifer Lawrence was just another kid doing school plays.  Part of what makes her so much fun, is that she seems stunned by her popularity and mystified by the public's interest in her.  People struggle for decades to become famous actors, clawing their way to the top bit by bit.  Jennifer Lawrence somehow managed to walk through the door to fame without breaking a nail.  Here's how a twenty-something tomboy, who swears, drinks, and cracks jokes about body parts, became Hollywood's new "It Girl". 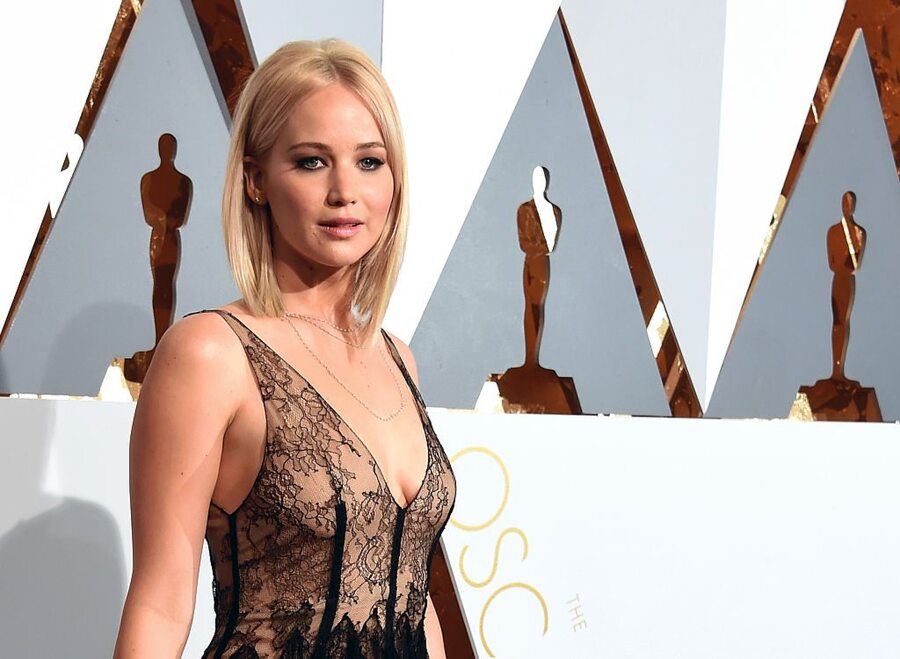 Jennifer Lawrence was born in Louisville, Kentucky on August 15, 1990.  The youngest of three children, Jennifer grew up with two older brothers who did what most older brothers do – alternated between protecting her fiercely and tormenting her.  She has described herself as a "strange" child.  She had trouble connecting with her peers and would often make up wild stories.  She also had a habit of answering every question she was asked with total honesty, which did not always make her the favorite person in the room.  She began acting in local theater productions, and seemed to find herself onstage.  Just before she started high school, she convinced her parents to help her launch an acting career.  They traveled to New York City and she began meeting, and auditioning for, talent agents.  In order to make sure that she would have time to focus on her career, she completed all of her high school coursework in two years, graduating with a 3.9 GPA.  Then she headed west for Hollywood.

Once in California, she began working almost immediately.  She guest-starred on "Monk" and "Cold Case", and appeared in the pilots for "Company Town" and "Not Another High School Show".  Neither of the pilots were picked up, but her work was noticed.  She was cast in a recurring role on "Medium", and then joined the cast of "The Bill Engvall Show" as Lauren Pearson, a co-starring role.  She garnered favorable reviews on "The Bill Engvall Show", and made the leap to feature film work in 2008.  She appeared in two smaller projects, "Garden Party" and "The Poker House", receiving critical accolades for both.  2009 saw her appearing in "The Burning Plain" opposite Charlize Theron.  She won her first major acting award for the film, taking home the Marcello Mastroianni Award for Best Young Emerging Actor/Actress at the Venice Film Festival.

In 2010, she starred in the critically-acclaimed independent film, "Winter's Bone".  Her work as the film's central character, Ree Dolly, was universally praised.  She received numerous acting awards and nominations, including an Oscar nomination for Best Actress.  She was twenty years old.  Her work in "Winter's Bone" catapulted her to a whole new level.  Suddenly, everyone wanted her.  In 2011, she appeared in "Like Crazy", "The Beaver", and "X-Men: First Class" in quick succession.  She had little time for anything but running between sets, interviews, and auditions.  In 2012, she accepted the role that would make her an international star.  She signed on to play Katniss Everdeen in "The Hunger Games".  When she was offered the part, she did not immediately jump on the role.  A huge fan of the books, she knew how difficult it would be to do the character justice, and she had no idea how the movies would be received.  She and Kristen Stewart had both been considered for the "Twilight" series, and she had watched Kristen endure the public scrutiny that came with playing Bella.  Jennifer was not certain she wanted to deal with any of it.  However, after three days of deliberating, she said yes.  "The Hunger Games" went on to be a massive, massive success.  It set opening weekend box office records and made Jennifer Lawrence a bona fide female action star.  She signed on to star in the rest of the series. 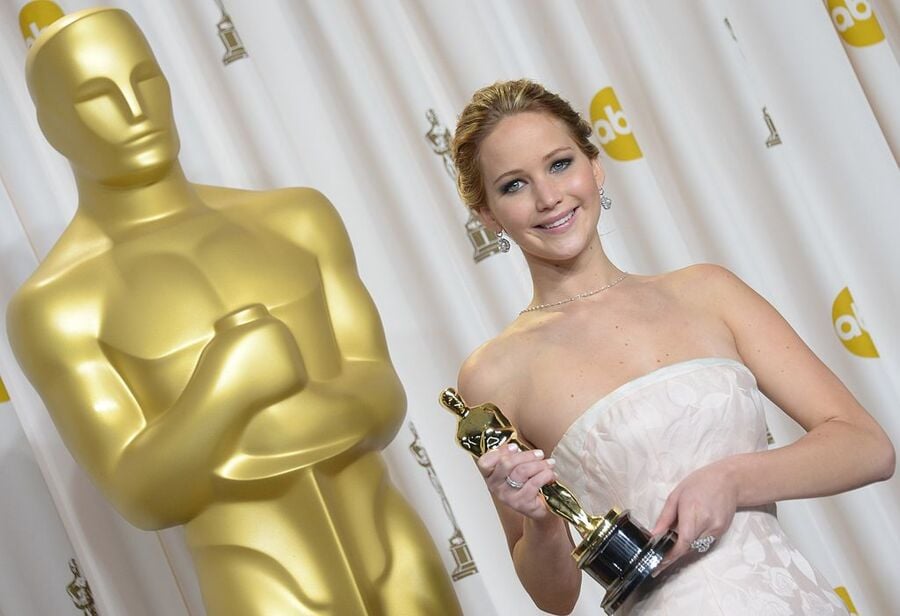 Unlike many action stars, she was not content to stick to action heroes.  She immediately returned to quieter, more dramatic projects, starring in the horror/thriller "The House at the End of the Street" and a romantic comedy called, "Silver Linings Playbook".  Her work in "Silver Linings Playbook" was considered a revelation.  By the end of 2012, she had collected even more awards and nominations, including another Oscar nomination for Best Actress.  She won the Oscar, and a Golden Globe, and a SAG Award… and the list goes on.  She basically won everything.  Since then, she has appeared in "The Hunger Games: Catching Fire", which was even more successful than its predecessor, and "American Hustle", which garnered her the third aforementioned Oscar nomination.  In 2014, she is already slated to appear in "Serena", "X-Men: Days of Future Past", "Dumb and Dumber To", and "The Hunger Games:  Mockingjay – Part 1".

As much as her acting has made her famous, it is the things she does and says off-set that has endeared her to Hollywood and the public alike.  That quality that made it difficult for her to interact with other children, her unflinching honesty, is a huge breath of fresh air in Hollywood.  Her interviews are funny, off-the-cuff, often hysterical affairs that have caused many talk show hosts and reporters to dissolve into incoherent giggle fits.  She has grabbed microphones from reporters to interview other stars on the red carpet, photo-bombed other stars at gala events, and seems completely unable to take the entire process of being a star, seriously.  After winning her Oscar, she stepped out to speak with the press.  They began asking her (completely inane) questions about the process of getting dressed for the Awards.  She seemed understandably confused.  She had just won an Oscar for her acting work after all.  You'd figure they'd ask about that.  Rather than spinning her answer into something pretty as most actresses would do, she answered simply.  "I got up this morning.  Bathed.  Some people showed up to help me get in to my dress.  Then I came here.  I'm not really sure what you're asking.  I'm sorry, I did some shots before I came out here, so yeah, I hope I answered your question."  When meeting Damian Lewis from her favorite show "Homeland", she actually tried to hide by hugging the wall behind her.  They were both giving interviews at the SAG Awards.  When the reporter interviewing her proceeded to give away the ending of the third season, Jennifer Lawrence did what any fan would do in that situation.  She got mad.  In the middle of an interview.  Politely mad, but clearly mad.  The interview concluded with her smiling politely and telling the reporter, "You're a monster."

In various interviews with publications such as Vanity Fair and Vogue, she has mentioned feeling a bit burnt out and wanting to take a break.  She is, after all, only human.  With her busy schedule, however, that does not seem like a possibility.  Even if she took a break, there is no guarantee that she would have the privacy and normalcy she seems to be craving.  She has managed to secure herself a place in the global conscious unlike any other star currently working.  Whether she is playing an action star with a bow and arrow, a mutant painted blue, a young woman with mental health issues, or a trophy wife, Jennifer Lawrence is utterly believable.  That same honesty that is sometimes difficult to take in real life, is absolutely riveting onscreen.  She's had no formal acting training and is known for goofing around on set right up until the director says, "Action".  Then suddenly, she's a completely different person.

She was recently honored with the Associated Press' Entertainer of the Year Award for 2013.  At just 23, Jennifer Lawrence has already achieved more than most actresses achieve in a lifetime.  An interviewer once asked her, "You're so young, but you've accomplished so much.  Are you worried that you have peaked too soon?"  She stared at him in horror for a moment and then said, "Well, I wasn't until you asked the question.  Gosh!"  At the end of the day, Jennifer Lawrence is completely flummoxed by all of the attention.  She just likes to act.  As far as she is concerned, the rest of the stuff the comes with fame and celebrity is just plain weird.  It would seem that, in her own head, she is still a tomboy with two protective older brothers and a potty mouth.  She just happens to act, and to do it really, really well.  If she can keep sight of that, there's a darn good chance that she will remain a favorite actress for years to come.