Jay Leno's net worth is largely due to his incredible career, but he also loves cars. That's not a secret. He's got a collection of more than 180 cars and 160 motorcycles that's worth at least $50 million… probably closer to $100 million, including a $12 million McLaren F1. He even still has his very first car, a Buick Roadmaster, that he still drives from time to time. He keeps all of his vehicles in his 122,000-square-foot garage in Burbank, California. He bought the property that serves as his garage in 1991. At the time, it was 17,000 square feet. He's expanded it over the years to meet his needs. Jay Leno has one of the most impressive car collections in the world and owns some of the most special cars and motorcycles ever made. He brings a unique perspective to his car collection. He doesn't see himself as their owner, he considers himself more of a steward. It's his job to care for these vehicles so that future generations have access to them. Let's take a look at 15 of his more special (and expensive) cars from the least expensive to the most expensive.

Leno designed this car himself with a little help from General Motors, Alcoa, and Honeywell. The EcoJet runs on biodiesel fuel and it can go so fast it can blow out a window. Leno wanted to build an American car that runs on 100% biofuel, was cruelty-free, and had paint that had no negative impact on the environment. The motor is a turbine that is usually used in helicopters. The EcoJet has more than 700 horsepower. 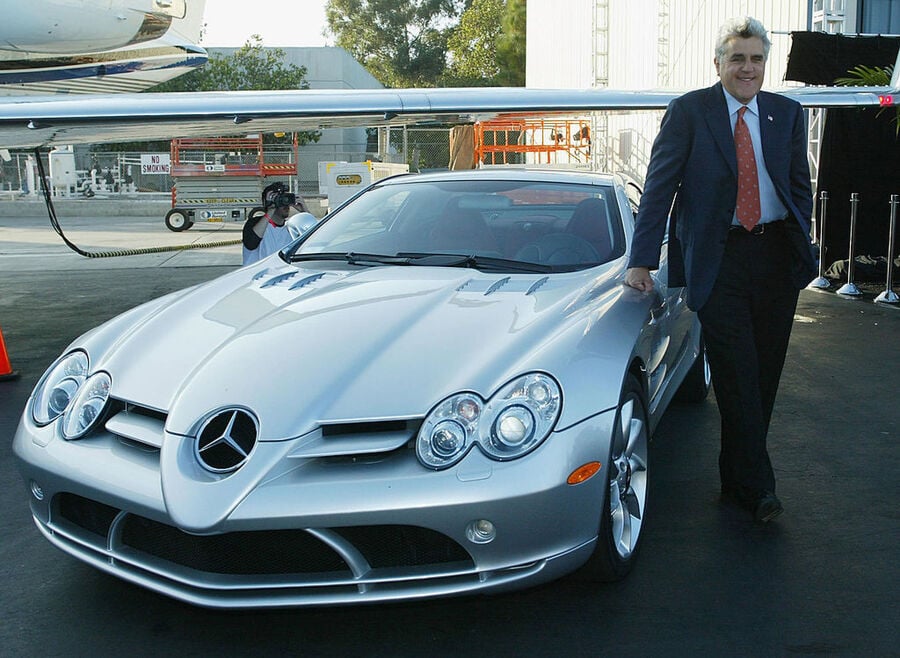 This car debuted in 1966 and was one of the first front-wheel-drive cars made in the U.S. Leno's Toronado is souped up with a more powerful engine and rear-wheel drive.

The R8 is Audi's sports car. Leno owns the convertible Spyder version. This top-of-the-line sports car goes from zero to 60 in less than three seconds.

You're not going to find many cars older than this. It's a legitimate steam-powered car. Leno once got a speeding ticket in this 114-year-old car going 75mph on the freeway.

This legendary sports car is just one of several Lamborghinis owned by Leno.

This car is powered by a tank engine and weighs several thousand pounds. It was handmade by metallurgist Randy Grubb. It is a one of a kind vehicle.

The turbine engine was an experiment by Chrysler that tried to eliminate the need for regular gas and pistons. The turbine engine cars ran on peanut oil, salad dressing, or anything else combustible. They were loud and not at all efficient so Chrysler discontinued the experiment. Only a few of these cars still exist today and Leno has one of them.

The original Ford GT debut at Le Mans in 1966 and won the race. Fifty years later, two GTs finished first and third in the legendary race. The GT is a supercar. It has a top speed of 216mph and gets 11 miles to the gallon.

The Mercedes Benz SLR McLaren is one of the most expensive cars around. Donald Trump also owns one.

Leno drives his McLaren P1 regularly. It's good to know that he enjoys the cars he owns rather than just collecting them.

This car is considered the best car ever made. It features upward swinging doors that give the car its Gullwing nickname. An unrestored 300SL was auctioned in 2014 for the same price as Leno's fully restored car is worth.

Leno's Lagonda is a replica of the classic car. Even the replica is worth millions.

Only 741 Lamborghini Miuras were ever made. There aren't many left today, but Leno has one!

The Koenigsegg Trevita goes from zero to 60mph in less than three seconds and can hit a speed of up to 254mph. Leno personally took delivery of this car from builder Christian von Koenigsegg. Leno's Trevita is one of only two in the world.

Leno has long denied having a favorite car in his collection but this car is the first one he'd save in a disaster. McLaren only made 107 F1s over a handful of years.