By Brian Warner on February 1, 2018 in Articles › Entertainment

How many times have you visited YouTube this week? Once? Twice? Five times? Twenty times? YouTube is so useful and fun that if you told me you visited the site 100 times today, I would understand. As we all know, YouTube is useful in a million different ways. The streaming video service is great for proving a point in an argument, learning how to cook a particular meal, perfecting a new soccer move, listening to music, laughing at a prank… The list is endless. I don't think I'm exaggerating when I say YouTube has changed the world. But you wanna know something crazy? YouTube owes its existence to Janet Jackson's nipple. Specifically her right nipple. And in another very real way, CelebrityNetWorth.com would also not exist today without Janet's right nipple. The one that was exposed during the 2004 Super Bowl…

There are lots of origin stories about how the idea for YouTube came about. Was it the result of a simple brainstorming conversation between engineers at a party? Was it someone's brilliant realization that it was hard to find clips of popular programs like The Daily Show, South Park and Saturday Night Live, after they had aired? All of these are valid guesses, but false. YouTube exists because of the 2004 Super Bowl when the whole world saw Janet Jackson's right boob.

For those who are too young to remember, on February 1st, 2004, Janet Jackson and Justin Timberlake performed at the Super Bowl halftime show. At one point during their performance, Justin reached over and pulled off a piece of Janet's costume which left her right breast fully exposed: 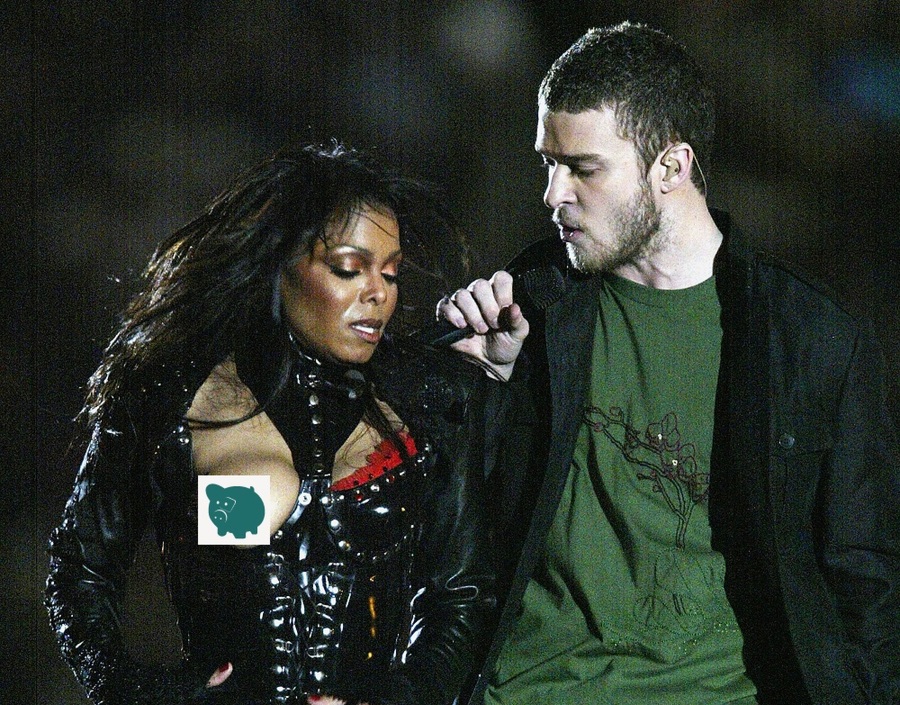 After this now-notorious nipple-slippage incident, a budding Stanford graduate student named Jawed Karim noted that it was damn near impossible to see the clip anywhere on the internet. In less than a year, Jawed's realization would be the kernel that launched a world-changing video platform.

Keep in mind that back in 2004, only a tiny percentage of the population had a DVR. And of those people who were lucky enough to own a DVR (and could rewind over and over and over and over), basically no one had the knowledge or equipment needed to download the footage off their TIVO onto a disk or flash drive that could then be transferred to a computer and ultimately a website. Enter Big-Boys.com.

One of the only people in the world who possessed both a DVR and the ability to transfer content to his computer was a suburban-Chicago entrepreneur named Rob Nolte. Nolte had had recently launched a website called big-boys.com that he was using as a resource for web developers. On a whim, Nolte decided to transfer the Janet Jackson clip from his DVR to his computer. He then proceeded to post the clip on his website. He figured a few random friends who did not have a DVR might want to check it out. The magic happened. Within 24 hours, if you googled "Janet Jackson Super Bowl video", big-boys.com was the top result. Instead of a few random friends visiting, the site was inundated with hundreds of thousands of visits per day for the next several weeks. Rob immediately had the brilliant idea to scrap his web developer website and replace it with a website that posted funny viral videos submitted by users. And thus one of the earliest streaming videos sites in history was born. Big-Boys changed it's name to Break.com in November 2005.

Disclosure: My first (and only) job prior to creating CelebrityNetWorth.com was at Big-Boys.com, hence my intimate knowledge of the history of internet video. I worked at Big-Boys/Break from July 2005 until February 2012, at which point I left to run CelebrityNetWorth full time.

YouTube was the brainchild of Chad Hurley, Steve Chen, and Jawed Karim.  The trio met while they worked for PayPal. Chad Hurley was a designer who had graduated from Indiana University of Pennsylvania with a degree in Design.  Steve Chen and Jawed Karim had both majored in computer science at the University of Illinois at Urbana-Champaign.  Clearly one of them noticed a burgeoning new industry of streaming video on the web. Pretty soon, their combined talents led to the creation of the online juggernaut that is now known as YouTube.

YouTube began small.  Their offices were above a pizzeria and a Japanese restaurant. They opened the beta site to the public in May 2005. The very first video uploaded to YouTube was an 18 second clip of Jawed Karim at the San Diego zoo standing in front of some elephants. This video was titled "Me at the Zoo" and was shot by Jawed's friend Yakov Lapitsky.

After a few mildly successful months of operation, the trio put together a proposal for Venture Capital firms. Using connections from their days at Paypal, the team landed $11.5 million in funding from Sequoia Capital.

In its early days, YouTube was no different from Break.com or StupidVideos or eBaumsworld. There are even emails from YouTube's first year (that were later revealed as part of Viacom's $1 billion copyright lawsuit) where the founders are clearly strategizing to post more user-generated prank-style content to attract a wider audience.

YouTube's mainstream tipping point happened on December 17, 2005. That's when Saturday Night Live aired a little video called "Lazy Sunday". It was the very first SNL digital short and it was the last skit of the episode, which also happened to be the season finale. In other words, no one at SNL thought much would come of this silly little rap video. They were wrong.

The very next day, the entire world was asking "did you see that SNL rap video???". By now, it had been almost two years since Janet Jackson's nipple gate and many more people had DVRs, but not many people were actually DVRing SNL. So, the day after the episode aired, everyone and their mother scrambled to find somewhere to watch it online. Lazy Sunday wasn't being replayed on NBC or anywhere on TV, so the only way to watch the clip was to Google things like "Lazy Sunday", "SNL rap video", "Chronicles of Narnia SNL". The first result on Google for all of these queries was a link from: YouTube. All of a sudden, the entire world was being introduced to, and very quickly falling in love with, the concept of internet video sharing. In the coming weeks, every mainstream newspaper and media outlet did a report on the wonders of this new-fangled "Youtube" website and how internet videos were breathing life back into a dreary Saturday Night Live.

Over the next year, YouTube's traffic exploded. So much so that they almost ran out of cash to pay their ever-expanding $1 million+ monthly hosting bill.

It was arguably the greatest business acquisition of all time. If YouTube was a standalone company today, it's not hard to imagine that it would be worth somewhere between $150 billion and $200 billion.

As we all know now, YouTube has spawned fortunes and launched a new generation of celebrities like Logan Paul, Miranda Sings and PewDiePie. Furthermore, since I learned how to create websites while working at Break.com under the mentor-ship of Rob Nolte, there's also a direct line from that fateful Super Bowl to the creation of CelebrityNetWorth.com.

And to think, none of it would have happened without Janet Jackson's right boob. Thank God for that boob!