Jake Paul Claims Floyd Mayweather Is "Broke"… After Earning $1.2 Billion, Could That Actually Be Possible?

By Brian Warner on June 24, 2022 in Articles › Entertainment

One year ago, on June 6, 2021, YouTuber Logan Paul stepped into a boxing ring to face off against five-division, 50 and 0 world champion, Floyd Mayweather. Much to the astonishment of everyone who tuned in, the fight went eight full rounds, with Floyd being declared the winner by points and scoring. Notably, Floyd did NOT knock Logan out, as pretty much every Pay Per Viewer had hoped and predicted.

Speaking of Pay Per Viewers, approximately 1 million people ponied up $49.99 to buy the match. And I'll confess, I was one of those people.

[Don't worry, all this set up is building towards what is implied in the article headline…]

For the fight, Floyd was guaranteed $10 million just to show up. In practice that meant Floyd, as the primary promoter, paid himself $10 million about a week before the fight. He then was also guaranteed 50% of whatever PPV revenue ended up being generated.

Logan Paul was guaranteed a relatively paltry $250k just to show up. In practice, that meant Floyd paid Logan $250k about a week before the fight. He was then entitled to 10% of the PPV revenue (the remaining 40% went to distributors and other promoters). Therefore, Logan's total payday should have been, $250k + $5 million = $5.25 million.

Keywords: "should have been."

As we said earlier, it's been one year and Logan Paul claims he has not yet been paid the $5 million PPV money he is owed. In an Instagram post marking the one year anniversary of the fight, Logan described Floyd as "hard to hit, but even harder to collect money from."

What is going on here? Why hasn't Floyd paid Logan? 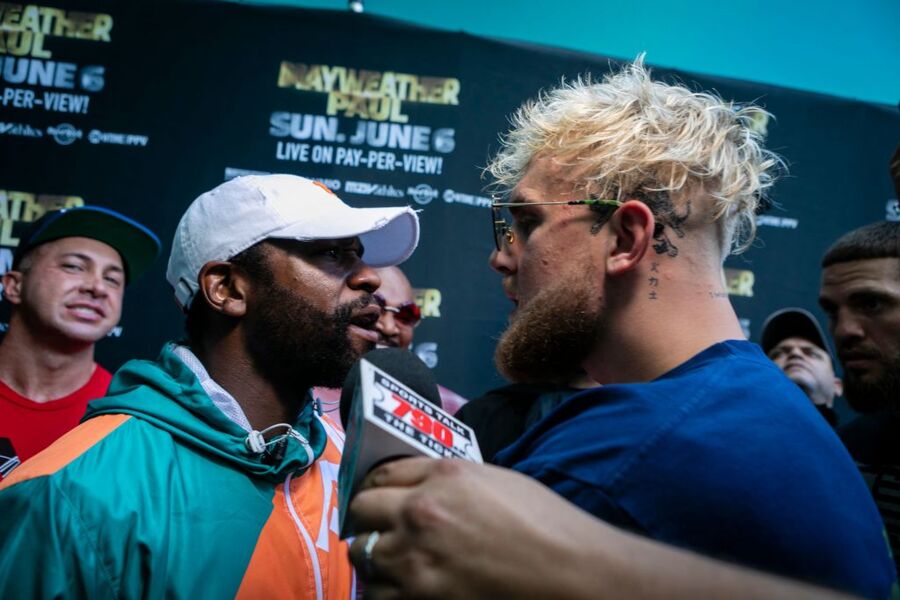 We here at Celebrity Net Worth have been tracking Floyd's career paydays for well over a decade. By our count, Floyd Mayweather's total career earnings as of this writing are…

That puts in him an extremely small club of athletes who have earned over $1 billion during their career. Other billion-dollar athletes include:

Yet according to Jake Paul in a recent interview, all of the money from Floyd's $1.2 billion in earnings is gone. When asked by instagram personality Rob Moore if Logan has been paid, Jake replied with the following:

"Nah… Floyd is Broke man. I've been saying it the whole entire time… I think he spent [the money] paying all those girls to be around him."

Could Floyd Mayweather Really Be Broke?

Honestly, in the boxing world anything is possible. Mike Tyson earned around $450 million during his career – the inflation adjusted equivalent of $750 million. At his all-time peak, Mike's net worth was $300 million. In 2003 Mike declared bankruptcy, listing $23 million in debt.

Evander Holyfield at one point sported a $200 million net worth. Unfortunately, all that money was gone by 2008.

Floyd himself has experienced surprising periods of financial instability and uncertainty, even after earning massive amounts of money. In March 2017, the IRS hit Floyd with a demand for $22.2 million in back taxes dating back to income earned in 2015 – the year he made $250 million fighting Manny Pacquiao. Including that $250 million payday, by this point Floyd had already earned around $600 million during his career. So you might be surprised to learn that Floyd's lawyers responded to the IRS with the the assertion that Floyd couldn't come up with the money on short notice because his assets were "restricted and primarily illiquid." So when Floyd fought Conor McGregor 60 days after receiving that demand, the IRS was first in line when the the Pay Per View money was ready to be distributed. The IRS got paid the full $22 million plus interest and penalties.

And then just a couple years later, Floyd's former friend 50 Cent claimed that the boxer was broke and that's why he continues to take on matches.

Floyd Mayweather's lifestyle is anything but frugal, so the idea that he may have lost a huge portion of his net worth is not exactly out of the realm of hypothetical possibility. Here is just a brief hit-list of Floyd's lifestyle:

Floyd's known jewelry collection is worth at least $25 million, including one watch alone that cost $18 million.

Floyd owns dozens upon dozens of vehicles. He once told an ESPN interviewer that he owns $15 million worth of cars that he HADN'T YET DRIVEN.

And we haven't even talked about his gambling habit. Floyd is known to regularly place six-figure bets ahead of major sports events. We know this because he typically shows off the receipts on Instagram. It's impossible to know how much Floyd has won or lost gambling.

Could Floyd be broke? I wouldn't describe that as an unimaginably impossible scenario, but I also think it's mostly hype and chatter from the Logan brothers. And speaking of the Logan brothers, it was just a couple of days ago that Logan went on a podcast and CLAIMED THAT JAKE WAS BROKE after investing all his money in crypto.

So until there's a bankruptcy filing, IRS lien or some other verifiable proof. I'm going to give Floyd the benefit of the doubt. In the mean time, wait for Floyd to start shedding some assets like his private jets and several of his mansions. Keep an eye on on the used car lots and jewelry stores in Vegas. Or perhaps the biggest red flag of all? Wait for Floyd to announce some ridiculous boxing exhibition like Floyd Mayweather Vs. Mike Tyson going eight rounds in the metaverse… and you have to own a stupid $1,000 NFT to attend or something like that…