Is Kanye West Still A Billionaire Or What?

By Brian Warner on October 26, 2022 in Articles › Entertainment

In the last few days I've gotten around 30 text messages and emails from people, both friends and followers of CNW, asking for my take on the downfall of Kanye's business empire. Everyone wants to know if Kanye is still a billionaire.

Forbes knocked Kanye's net worth down to $400 million this week. As usual, I don't agree with their methodology at all. I don't have time to get into why and of course this all goes down the one week where I'm basically unavailable to write. So the article below was formulated over a bunch of random 20 minute sessions when I was able to sneak away and write out my thoughts. Here we go.

There are three ways to become a billionaire.

With all three methods, to be a billionaire your asset value/bank account balance needs to be greater than $1 billion after subtracting all debts. So for example, if you have $1 billion in your bank account after selling a business (method #1), but you also have $100 million worth of mortgages thanks to a mansion in Malibu, your net worth is $900 million.

Kanye West became a billionaire using method #2. The vast vast majority of his net worth (even after the fallout) is connected to the private (paper) valuation of the  Yeezy brand. He officially achieved billionaire status in March 2021 after a private valuation of his various personal assets, performed by the bank UBS, was made public. Below are the values of Kanye's assets and debts identified by UBS in March 2021:

As you can see, the valuations of the Yeezy brand, Yeezy website and his Gap partnership contributed $6.1 billion of $6.6 billion net worth. In other words, if those two assets did not exist, Kanye would have been worth around $500 million back in March 2021.

A lot has happened to Kanye's business empire in the last 72 hours. Actually it goes back a bit further than 72 hours. Gap ended its partnership with Kanye on September 15. On Tuesday both Gap and Foot Locker began physically removing Kanye products from their respective stores.

The Gap partnership wasn't all that meaningful in my view. It had high hopes and potential when it was first announced, but the actual relationship did not amount to much in reality.

Adidas is another story.

In 2022 Adidas will generate around $25 billion in total revenue. Incredibly, almost exactly 10% of that revenue will have been generated by Yeezy products. Yeezy's annual revenue is estimated to be $2.5 billion and annual profits are $200 –  $250 million. 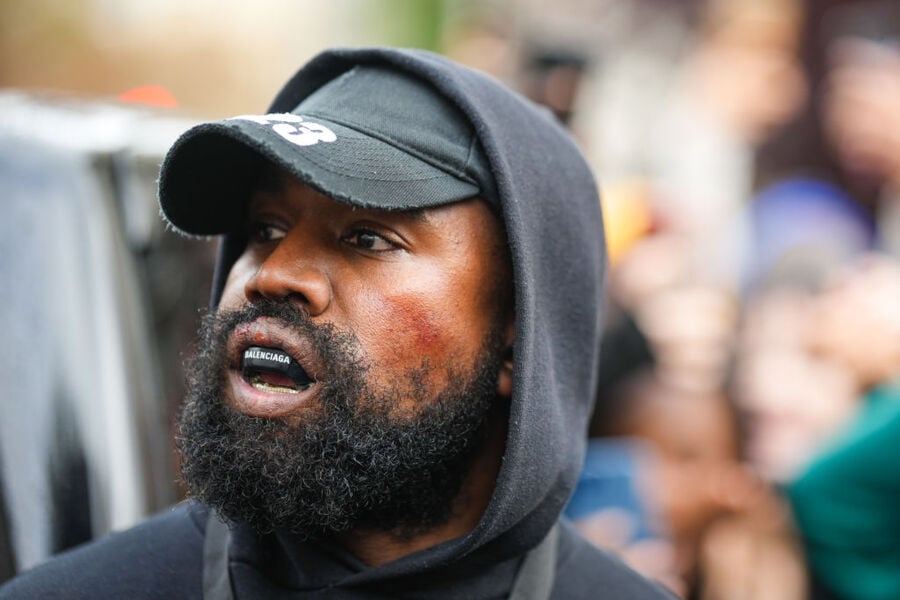 So when Adidas says its ending the partnership, that just means Kanye is now a brand without a distribution and manufacturing partner.

As a comparison, Michael Jordan does not own any percentage of the Jordan brand. He's a highly paid endorser who earns a very generous royalty on the brands' sales. He does not have an equity ownership stake, so if Nike ended the Jordan brand tomorrow, Michael would walk away with zilch.

With Adidas dropping out of the partnership, Kanye has two options:

That first option is by far the best for Kanye, but can Kanye find a new corporate partner willing to take on his baggage? Is there an apparel company out there willing to digest Kanye's controversy in exchange for the potential of an extra couple hundred million in annual profits?

Kanye is wasting no time in trying to find out the answer to these questions.

On Wednesday afternoon Kanye showed up UNANNOUNCED to the Skechers corporate headquarters in Manhattan Beach, California, presumably to discuss a new partnership. He was escorted out of the building:

After Adidas dropped Kanye West, he showed up today at the LA office of another shoe company, unannounced and uninvited, with a film crew. He was escorted out.

The company was Skechers.

If Kanye can find a company that's willing to handle his manufacturing and distribution, what impact will his recent controversies have on his brand's annual revenue and profit? Does revenue drop 20%? 30? Not at all?

FYI in the last 72 hours, seven of the eight most popular shoes on StockX are Yeezy items:

Seven of the top eight most popular shoes on @stockx over the last 72 hours: @kanyewest's Yeezys. pic.twitter.com/7xKOUNzmTn

So people don't APPEAR to be turning their backs on Kanye so far. If we assume that's a sign that demand will not wane, certainly the value of Yeezy is still very very high… As in, several billion dollars, which would mean Kanye's net worth would still be $2-3 billion dollars on paper.

If Kanye is forced to go independent, his road to maintaining billionaire status is more complicated but still achievable, which is why I believe it's still accurate to call him a billionaire.

Let's say Kanye sets up his own manufacturing, distribution, logistics etc… And let's say his controversy results in revenue and profit being cut in half from previous levels. That would still be a business that generates $1.25 billion in revenue and $125 million in profit per year. In 2022 the average EBITDA (profit multiple) valuation of a retail business was 15x. Let's be safe and use 10x. At $125 million in annual profit, the Yeezy brand would be worth $1.25 billion. Combined with his other assets, and subtracting roughly $100 million in liabilities, and Kanye's definitely still a billionaire. Perhaps worth as much as $2 billion.

On the flip side of everything I've just said, if Yeezy does not make a comeback in any meaningful way, it's very difficult to justify how Kanye West could still be considered a billionaire.