Is Bikram Yoga A Life-Changing Health Practice Or Just A Multi-Millionaire's Skeezy Business Empire? Maybe It's Both.

By Amy Lamare on November 22, 2019 in Articles › Entertainment

There's a popular sarcastic phrase, it goes something like "Namaste, bitches." Now one might think this very sentiment flies totally in the face of the principles yoga embodies. That is not necessarily the case when it comes to Bikram yoga and its founder and all-powerful yogi, Bikram Choudhury.  Some have called the eccentric Choudhury's sequential, 26-move, sweaty yoga empire a cult. Normally, yoga is about peace and love. But for Los Angeles based Choudhury, it has been more about shrewd business moves and greed. And now, allegations are surfacing from several former students that threaten to topple the Calcutta native's empire of sweat.

Bikram Choudhury was born in Calcutta, India on February 10, 1946. He was a yoga prodigy from a very young age, and by the time he was five, he was studying under one of India's most famous yogis. When he was 20, Choudhury was in a weightlifting accident. Doctors told him there was a good chance that he would never walk again. It was at this time that the budding yogi came up with his signature moves. He developed a new method of yoga designed to rebuild his strength and rehab his injuries. It involved performing 26 incredibly specific yoga poses, in a strict, sequential order for 90 minutes in extreme heat. Bikram made a full recovery in six months, much to the amazement of his doctors. So, after a few years honing his style of yoga, he packed up and moved to Los Angeles. He was 24 years old.

Well, Choudhury's brand of voodoo was, as you can imagine, embraced by La La Land. He founded yoga studios in L.A. and Hawaii that were enormous successes right off the bat. Celebrities embraced his hot yoga practice and in turn, made Bikram Choudhury a celebrity in his own right. Choudhury was on the Tonight Show (with Johnny Carson) and was featured on 60 Minutes. He led President Nixon and Elvis through sessions of his yoga.

He also made a savvy business decision to copyright his 90-minute long, 26-move, 105 degree, 40 percent humidity, yoga practice. This would force anyone who wanted to teach what he called Bikram Yoga to pay Choudhury a royalty fee. If they refused, they would be in violation of United States Copyright law.

Business boomed throughout the 1970s. By the early 1980s, Choudhury was a very wealthy man with a mansion in the Hollywood hills, a garage full of luxury automobiles, and a penchant for flashy jewelry. And still, his practice grew throughout the 80s, 90s, and 2000s, and continues to grow today.

Bikram yoga became nearly synonymous with yoga, period. In California, you cannot walk five blocks without encountering at least one establishment bearing Bikram's name. Groupon touts hot yoga deals left and right. Choudhury set up training centers, colleges of yoga, if you will, where he taught his method of yoga to aspiring Bikram yoga instructors for the sum of $12,500. Choudhury sat back and reaped the profits, amassing a net worth of $75 million.

And then the lawsuits started.

In 2011, Choudhury sued a former student named Greg Gumucio who had been teaching Bikram's 26-pose method under his own brand of competing studios since 2006 without paying Choudhury one red cent.  Bikram won that case in copyright and trademark infringement as he had a number of similar lawsuits over the years. But the tides were changing. 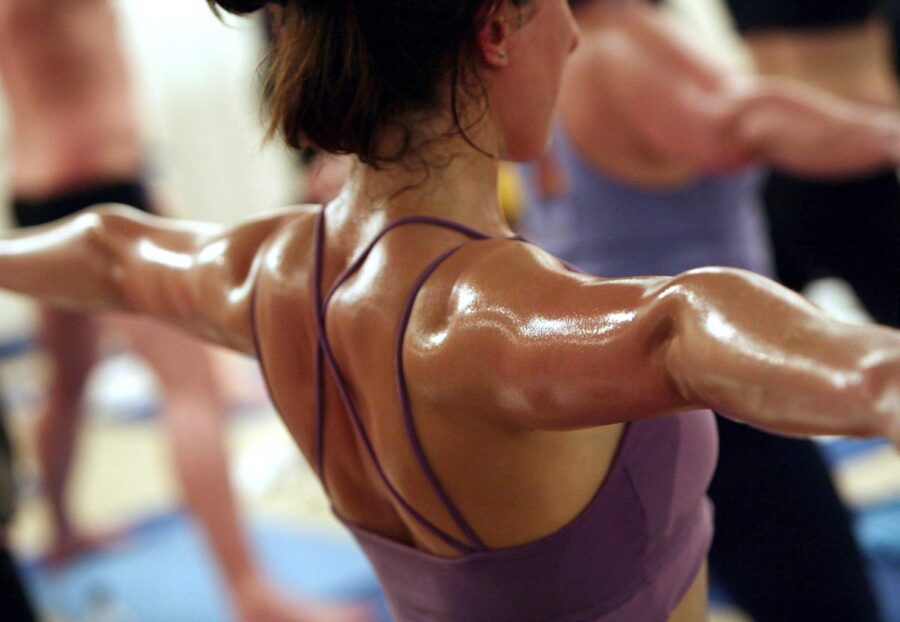 In December of 2012, a Federal judge overturned Bikram's longtime 26-pose copyright. All those lawsuits by Choudhury enforcing his copyright had alerted the courts to a problem. In the end, the U.S. Copyright Office ruled that "while choreography can be copyrighted, that might not be the case for choreography that purports to have medical benefits." Basically, Bikram's old foe Greg Gumucio argued that "It's kind of like if Arnold Schwarzenegger said I'm going to do five bench presses, six curls, seven squats, call it 'Arnold's Work Out' and nobody can show that or teach that without my permission. That's crazy to me." Bikram lost the ability to sue studios that teach his exact sequence. But don't cry for Choudhury. Remember, every time you see a yoga studio using the name Bikram, he gets a royalty.

Soon, however, a whole other sort of lawsuit would threaten Bikram's yoga empire.

Previously, I mentioned that he set up yoga training centers where he charged hopeful Bikram yoga instructors $12,500 for the right to teach his brand of yoga. In these training sessions, Choudhury paces the stage clad only in a black Speedo, pontificating on life, sex, and the power his yoga has to transform people. But now, the yogi is being accused of more sinister deeds. The latest lawsuit, filed on February 13, 2015, is the sixth lawsuit by a former student claiming the yoga guru raped her during teacher training.

The first complaint was filed two years ago. As more and more complaints piled up, more women spoke out publicly about accusations of assault and harassment at the hands of Choudhury. The allegations have created friction in the close-knit world of yoga instructors and students who've dedicated a lot of time and money to worship at the altar of Bikram's method.

One complaint against Choudhury was brought by a woman who was a onetime Bikram devotee who brought suit against her leader in 2013. She claims that Choudhury started pursuing her sexually at a teacher training she attended in 2005 when she was 20 years old. The claimant says that he whispered sexual advances to her during classes as well as groped and assaulted her in at his home and in a hotel room.  This woman loved yoga, the world of yoga and everything it offered her. She's left the yoga world and no longer teaches or practices.

The civil suits against Choudhury accuse him of targeting, harassing, and assaulting young women who had once revered him and his practices. Mary Shea Hagebols is the attorney for the six women suing Bikram Yoga's founder. She has stated that the lawsuits are moving forward quickly.

Another complainant described how at 18 years old, she signed up for a 2010 teacher training session in Las Vegas. She felt that Bikram Yoga was her calling. Choudhury praised her for how easily she picked up the script of his practice. She was asked to massage him for hours while watching Bollywood films. At one point he began groping her. This was her leader, a man she revered. She was 18 years old and afraid to speak up. She had also spent $10,000 of her college fund on the yoga training and felt she absolutely had to finish the course. A few weeks later, Choudhury asked her to accompany him to his hotel room where he allegedly sexually assaulted her and demanded she say things including: 'Bikram you're the best' and 'I want to f–k you all night long,'"

He most recently assaulted her in February 2013, according to the legal documents. In July 2014, this woman taught her last Bikram Yoga class and took a job as a waitress.

In light of the allegations and other misgivings, several owners have decided to remove the name Bikram from their yoga practices. One Southern California studio owner who renamed her practice in light of the allegation had her own run ins with Choudhury's brand of teaching in 2008, when she attended a teacher training led by Bikram.

The California studio owner had been doing Bikram style yoga for many years. She went to the training hoping to learn more about yoga, anatomy, and the practice she loved. Instead, she was appalled by the cultish vibe of the session. During the daylong training, the trainees took part in marathon yoga sessions in a 105 degree room, were made to memorize a script for classes that teachers were required to strictly adhere to, and were subjected to rambling lectures and mandatory showings of Bollywood movies. The day's session wrapped up around 3am. Teacher trainees were also asked to massage Choudhury as he sat in a chair on the stage before rows and rows of his students.

However, other students continue to revere Choudhury and his yoga and he remains the face of his empire of sweat. Attorneys for Choudhury and his yoga college have issued a statement denying all claims of assault and arguing that the women claiming they were raped are exploiting the legal system for financial gain.

Over the last few years, the lawsuits against Choudhury have multiplied, but new Bikram-branded studios have continued to open and flourish around the world. Today, there are over 350 Bikram Yoga studios in the United States and over 600 worldwide. Namaste, bitches. Choudhury may still be laughing all the way to the bank, but the lawsuits will catch up with him eventually.