By Amy Lamare on December 2, 2016 in Articles › Entertainment

Today, Bono is a global superstar. In fact, he has been for more than four decades. His work with U2 has made him a very wealthy man and his activism on behalf of world poverty and AIDS has racked up plenty of good karma points. Let's take a look at how Bono became… well, Bono.

Bono was born Paul David Hewson in Dublin, Ireland in 1960. He joined U2 when he was a 16-year-old high school student. He was dubbed "Bono Vox," which means good voice, and has gone by Bono ever since. U2 began touring pretty much immediately and released their first album, Boy, in 1980. In 1981 the band released October followed by War and Under a Blood Red Sky in 1983 then The Unforgettable Fire in 1984 was released. 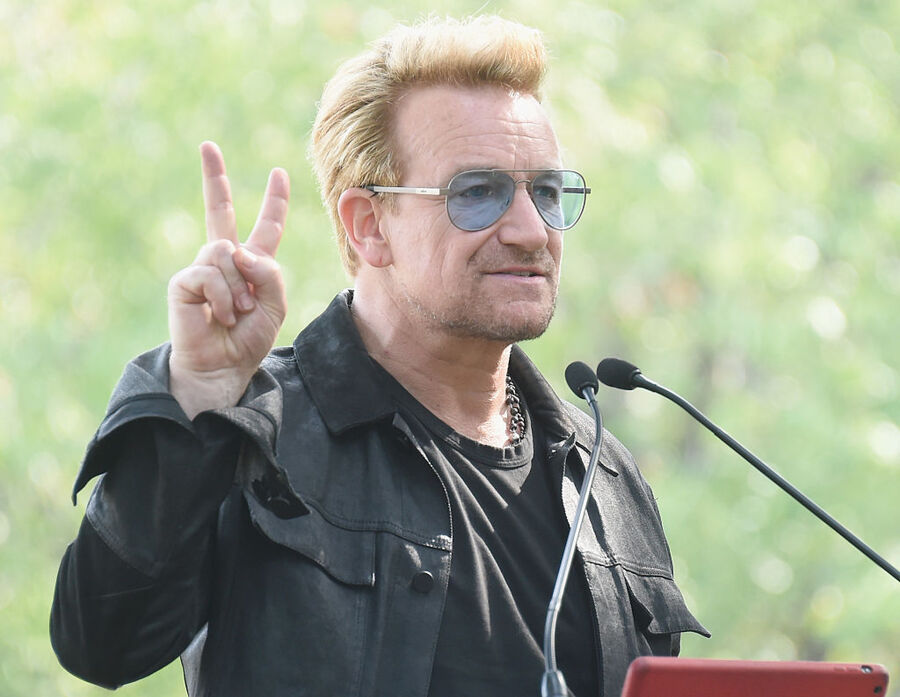 The Joshua Tree, released on March 9, 1987 was the album that catapulted Bono and U2 to worldwide stardom. The Joshua Tree was the first new release to come out on CD, vinyl, and cassette tape on the same day. It is the band's best-selling album and with 25 million copies sold worldwide it is among the best-selling albums of all time. While U2 had been successful before The Joshua Tree, particularly as a touring band, this album really made Bono and his band mates the biggest band in the world.

Subsequent albums for Bono and the gang include 1991's industrial-sounding Achtung Baby, 1993's funkier-edged Zooropa and the 1997 techno-influenced Pop. The 2000s saw the release of All That You Can't Leave Behind, How to Dismantle an Atomic Bomb, and No Line on the Horizon. In 2014, after a five year gap between albums, U2 released Songs of Innocence.

Additionally, Bono has written most of the band's lyrics, which adds to his net worth, substantially.

Now some of you may be wondering "what about $1.5 billion dollars Bono made off his Facebook stock?" Well, that particular rumor has been widely debunked. Bono is one of six founding partners of the private equity firm Elevation Partners, which bought large amounts of Pre-IPO Facebook stock in 2009 and 2010. Now while the total value of those stocks was likely somewhere in the neighborhood of $1.5 billion, Bono's actual share of that was $43 million–not a bad chunk of change, but nowhere near $1.5 billion. You can read more about that here.

Bono is also one of the most dedicated philanthropists in the world. This dates back to at least 1984, when he sang on the Band Aid single "Do They Know it's Christmas?/Feed the World." In 2005, Bono teamed up with Bob Geldof to organize the Live 8 concerts, which were put on to bring global attention to poverty and raise funds to end poverty. Through these efforts and many more, Bono has become one of the best known philanthropic performers in the world.

On a personal note, Bono has been married to Irish activist Allison Hewson since 1982. The couple has four children.