By Amy Lamare on July 2, 2014 in Articles › Entertainment

As the World Cup gets ready to kick off amid unfinished stadiums and airports and protesting Brazilians, let's turn our focus for a moment to one of the truly great players, if not the greatest player in the world: Neymar da Silva Santos Júnior. More commonly known by just his first name: Neymar. This 22 year old is probably the most famous active soccer player in Brazil today and easily the Brazilian national team's best hope for winning the 2014 FIFA World Cup. Legendary soccer player Pele describes Neymar as a "technical marvel, a wizard with magical feet." And while Neymar may be a whiz on the soccer pitch, his absolutely insane spending habits might be even more eyebrow raising. Let's take a look at how this 22 year old burns cash… 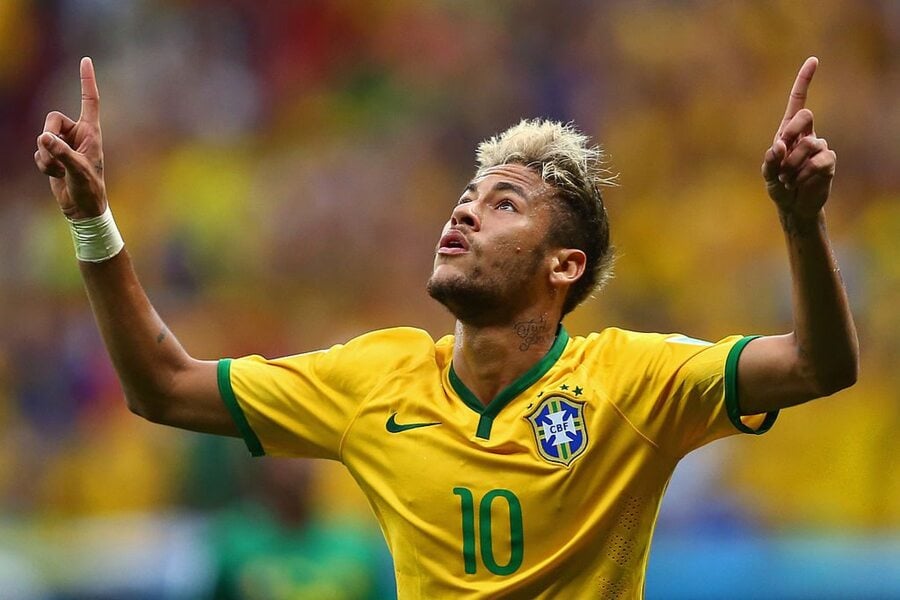 When he's not playing for the Brazilian national team, Neymar plays forward for Spanish club FC Barcelona. When he was just 19-years old, he won the 2011 South American Footballer of the Year award. Oh and then he won it again in 2010. Neymar is known for his speed, acceleration, dribbling, finishing, and his ability to deftly handle the ball equally as well with both feet. He is celebrated for his playing, even Ronaldinho has said of Neymar: "he will be the best in the world." At the tender age of 22, Neymar is the fourth highest paid soccer player in the world with an annual income of $28 million. Of that $28 million, $12 million is from salary and $16 million comes from endorsements for companies like Nike, Castrol, Panasonic, L'Oreal, Volkswagen.

Anyone who earns around $30 million per year certainly has the right to splurge a little. However, this young man is really letting his millions burn a hole in his pocket. Concerns have arisen that the talented athlete may, in fact, be on the road to bankruptcy if he doesn't cool his wild spending habits ASAP.

In just the last few years alone, Neymar has spent $750,000 on a triplex condominium and $2 million on a mansion in a gated community. Both properties are located on in the Northern Coast section of Sao Paulo. He also bought a $150,000 apartment in downtown Sao Paulo. When he's in Spain, Neymar lives in a $2.5 million mansion on the outskirts of Barcelona.

He bought the 20 year old mother of his child a $1 million dollar penthouse and pays her $15,000 per month child support. When he drives, he has a fleet of cars in both Spain and Brazil. His favorite car is supposedly a Porsche Panamera Turbo which in Brazil will set you back $400,000 to $550,000, depending on the customizations. When Neymar travels by air, he exclusive flies on private jets. He also recently purchased a helicopter.

But the craziest, most lavish purchase of all is a second-hand Italian yacht that the soccer star reportedly purchased for $15 million. Oh and btw, this yacht costs $500,000 to maintain and fuel every year and will depreciate roughly five to ten percent each year. By comparison, when David Beckham, who has made considerably more money than Neymar, wants to sail on a yacht, he rents the damn boat rather than sinking (quite literally) good money into a bad investment. You really have to wonder what this 22-year old is thinking.

Now, to be fair it should be noted that as a 22 year old soccer star, the world is literally his oyster. Neymar is spending his money exactly how every other 22-year old young man would, if he had the chance.

Neymar makes a fortune, no one is disputing that. But he is also at the beginning of his career — a career that is unpredictable in length. He's only just begun to make this money and he is, by most accounts, spending it almost as fast as he makes it. There is no argument that the young soccer superstar is overspending, but is he on a path to bankruptcy?

On the surface, this looks like out of control spending, but Neymar's buying spree lacks some of the hallmarks of other famous athletes' rags-to-riches stories. Neymar isn't a partier stumbling drunk out of bars and casinos on a regular basis. So far, he only has one child to support. He isn't one of those guys known for wearing a lot of jewelry.

Neymar likes to sing, dance, score goals and hang out with Pele when he's not buying expensive real estate and luxury yachts, which at least, should he run into trouble, he can sell. If his soccer career were to end for some reason, at least he'd have a place to live. Again, he's just 22-years old.

The spending is especially disconcerting given the bad mix that athletes and money traditionally are. For instance, Mike Tyson made his professional boxing debut at age 18 in 1985. Over the next two decades, Tyson made between $300 million and $400 million. At the height of his career, he could command $30 million for a single fight. He also was going out and buying mansions, expensive cars, and Bengal tigers. Tyson also liked jewelry. In 2002, he went into a Las Vegas jewelry store and bought a gold chain with 80 carats of diamonds in it that cost $174,000. Eight months later, the boxer filed for bankruptcy with $23 million in debts.

So you can see why Neymar's spending causes some concern. Just because you make money doesn't mean you won't run out of money. Look at Mike Tyson. Or NBA star Antoine Walker. Or Evander Holyfield. Or, stepping out of sports… M.C. Hammer.

If Neymar is just buying things he's always wanted and then he reigns in his spending, fine. If he doesn't learn some financial responsibility, maybe he can hire Allen Iverson's old financial adviser. This brilliant advisor reportedly stashed away $32 million of Iverson's money into an account that the NBA legend can't touch until he is 55 years old. Iverson gets $1 million annually to hold him over until then.

Do you think Neymar is spending out of control or just enjoying the perks of being young and fabulously wealthy?