By Paula Wilson on June 18, 2014 in Articles › Entertainment

It's hard to believe that Jay Leno has been working in the world of comedy for over 30 years.  He made a name for himself as a stand-up comedian, attempted to parlay that into an acting career, and found massive fame, and a large fortune, as a late-night talk show host.  Later this year, he will be honored with the Mark Twain Prize for American Humor, the most prestigious comedy award in the US.  While his many appearances on "The Tonight Show with Johnny Carson" and his subsequent eleven years as host of "The Tonight Show" made him a recognizable face in every household, he holds another claim to fame that makes him the envy of many, many people.  Jay Leno has one of the most mind-boggling car collections on the planet.  Now that he has officially retired, he finally has the chance to spend quality time with all of his amazing vehicles.  Just how jaw-dropping is his collection?  Take a look and judge for yourself.

Jay Leno was born in New Rochelle, New York on April 28, 1950.  He went on to study Speech Therapy at Emerson College, and started his own comedy club while he was in school.  From there, he began performing stand-up all over the East Coast, and eventually caught the eye of Johnny Carson.  He appeared on "The Tonight Show" on March 2, 1977, and his career blew up from there.  Though he appeared in a few television and film projects, such as "Good Times", "American Hot Wax", "Silver Bears", "One Day at a Time", and "Laverne & Shirley", he didn't truly hit it big until he was hired to succeed Johnny Carson on "The Tonight Show".  For nearly 15 years, he cracked jokes about American culture and interviewed hundreds of stars.  While he wasn't universally liked, he was successful enough to amass a healthy net worth of $450 million dollars, part of which he poured into the insane-o car collection outlined below. 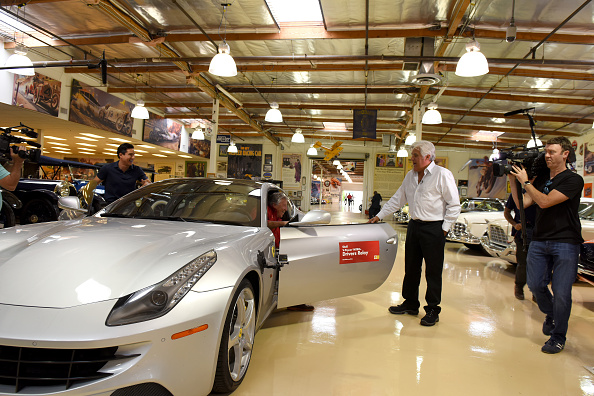 Produced between 1966 and 1973, the Lamborghinin Miura S is widely considered to be the car that started our love of two-seater sports cars.  The car was famous for its sleek design, which was the brainchild of Marcello Gandini.  Gandini and his team actually designed and built the car in secret, after their ideas were rejected by Ferruccio Lamborhini, the company's founder.  It currently sells for around half a million dollars.

The fastest production car on the road (it can reach speeds of 231 mph), the McLaren F1 is the sports car for every wealthy person who loves speed.  It hit the ground running, as it were, in the early 90s, and is still one of the best loved sports cars out there.  Only 106 were made and they currently sell for anywhere from $1 million to $9 million.

Produced by Mazda from 1967 to 1995, the Mazda Cosmo featured Mazda's Wankel engine, and a futuristic design inspired by the "Space Race" of the late 60s. It's also the car that became the basis of the RX-7 and RX-8 sports cars.

If the phrase, "muscle car", conjures up an image in your head, it's most likely an image of the Dodge Challenger.  The 1970 Dodge Challenger RT was the first of the series built on the Chrysler E platform and is widely considered to be the quintessential muscle car.  A 1970 Challenger will run you close to $100,000.

Gordon Murray is most widely recognized for having designed the McLaren F1 and multiple successful Formula 1 cars.  He also designed the LCC Rocket, an ultra-light, open cockpit roadster that runs on a 1-liter motorcycle engine. There's only one.  Jay Leno owns it.  'Nough said.

After taking some time away from sports car production, Jaguar leapt back into the game with the XK120M Coupe in 1948.  The car was produced until 1954, and then Jaguar shifted their focus again.  Stylistically, it served as the inspiration for just about every other Jaguar since.  It currently costs $100,000 or more.

Lagonda began producing cars in 1906, and was bought up by Aston Martin in the late 40s.  The company produced gorgeous cars, working with a host of ex-Rolls Royce designers. During both World Wars, the Lagonda factory was also a major producer of guns, so there were large gaps in car production.  Jay Leno's Lagonda is actually a custom-built replica.

The Yenko Stinger was produced by Yenko Chevrolet, a custom muscle car shop based in Pennsylvania.  It is a souped up Chevrolet Corsair, remodeled to meet racing specifications.  It's recognizable for its blue stripe design.

This car was customized for Jay Leno, and is totally street-legal, even if it doesn't look it.  It features an M47 Patton Tank engine and two TR 72T turbochargers worth $10,000 each.  It weighs 5 tons and gets 3 miles per gallon.

Jay Leno owns one of 375 McLaren P1s.  The cars are a plug-in hybrid produced by McLaren from 2013 to 2014.  Leno was the first person to have one in the United States, and paid just under $2 million for the privilege.

Manufactured from 1961 to 1975, the E-Type was one of Jaguar's most popular vehicles.  It is widely considered to be the sports car of the 60s, and the UK's The Daily Telegraph, ranked it at #1 on their list of the "100 most beautiful cars" in the world.  Jay Leno purchased his original in 2013.

710 Bugatti Type 57s were produced between 1934 and 1940.  There are only two original ones remaining today.  If you want one, prepare to pony up $30 million+.  Jay Leno owns a replica built over an original Bugatti chassis and engine, so it's pretty darn close to an original.

Produced from 1974 to 1990, the Lamborghini Countach is the other car that Lamborghini is most famous for.  Again, it was the brainchild of Marcello Gandini, and it has appeared on multiple lists of the Top Sports Cars of the 70s and 80s.  This is actually one of the few cars in his collection that Jay Leno ever drove on a regular basis.  He reportedly put over 70,000 miles on it.

Only 55 of this rather experimental car were ever produced by Chrysler.  Made from 1963 to 1964, the Chrysler Turbine Car runs on a gas turbine engine.  The engine could run on anything with combustible properties, including vegetable oil.  Unfortunately, the car had a number of problems, and never took off.

At one time, Duesenberg was synonymous with uber-luxury.  Jay Leno found his Duesenberg parked in a garage on Park Ave. in New York.  It had been there for 70 years as a result of the original owner's family going through some internal financial issues.  It needed a lot of work, but as the last of its kind, it was simply too awesome to pass up.

This vehicle's name is a bit of a misnomer.  Using parts from a 1930 Bentley, Jay Leno had a custom vehicle constructed to look old, but to drive and handle like a modern sports car.  The vehicle runs on a 27-litre Rolls-Royce Merlin V12 engine, (the same engine used in Supermarine Spitfire airplanes) and weighs 3 tons.

An American car that was only manufactured from 1936 to 1937, the Cord 812 is notable as being one of the first cars to feature hidden headlamps and front-wheel drive.  The Cord company was known for constantly innovating and trying new design ideas.  Their designs just didn't always work so well, and the Cord 812 proved unreliable, though very pretty.  Nowadays, the cars run for around $150,000.

Produced from 1970 to 1975 by Citroen in France, the Citroen SM won a slew of car awards in the early 70s, including European Car of the Year and Motor Trend Car of the Year.  A futuristic and sleek combination of ultra-luxurious town car and sports car, the vehicle could cruise at 100 miles per hour, without sacrificing comfort.

The Doble Steam Car was one of a series of steam-powered cars produced by the Doble brothers between 1906 and 1931.  Though the brothers and their supporters continued to innovate and experiment with steam-powered vehicles into the 60s, there were some efficiency issues that seemed insurmountable, and the cars never caught on.  Jay Leno's Doble Steam Car was formerly owned by Howard Hughes, who reached 132 miles per hour in it at one point.

The Arial Atom is notable for its exoskeleton design.  The Ariel Motor Company has made roughly 100 of the vehicles each year since they began producing them in 1996, though they have made 10 to 25 of several specialty versions of the vehicle, as well.

The Volga GAZ-21 went into production in 1956 and ceased production in 1970.  It was the biggest and most luxurious car available in the USSR in the 60s, and was considered the car to have if you were anybody important.  It was also incredibly expensive for its time.

Maserati decided to enter the Gran Turismo market in 1957 with the 3500 GTi.  The GTi was the first fuel-injection vehicle produced in Italy, and proved relatively popular.  The company ceased production of the line in 1964.  Jay Leno found his in a barn and had it fully restored.

Produced from 1963 to 1967, the 1963 Chevrolet Corvette Sting Ray, was recognizable by its tapering rear deck and split rear window.  The split window was only featured in 1963.  It is arguably the most famous American sports car ever.  Jay Leno's Sting Ray is a restored vehicle.

Custom built for Jay Leno by General Motors, the EcoJet concept car runs on biodiesel fuel and a Honeywell LTS101 gas turbine, rather than a piston engine.  It has a fully-functional computerized interior with multiple LCD screens, and is street-legal.