By Brian Warner on September 28, 2017 in Articles › Entertainment

As you have no doubt heard by now, Hugh Hefner died yesterday at the age of 91. He died at his mansion in Holmby Hills, California, surrounded by loved ones. And speaking of Hugh Hefner's loved ones, you might be wondering who exactly will inherit his $50 million personal fortune. Let's explore the possibilities.

First of all, many people may be surprised to find out that Hugh Hefner's net worth at the time of his death was 'only' $50 million. You might be especially surprised by that number when you consider his contemporary Larry Flynt is worth $500 million. Well, the unfortunate truth is that Hefner's net worth was almost entirely wrapped up in the value of the physical magazine of Playboy (as opposed to the digital operation and foreign licensing branch of the business). As magazine sales evaporated, Larry Flynt was much better positioned to survive the hit because he had invested in dozens of ancillary businesses such as casinos, night clubs and real estate.

Playboy was formerly a public company. At its peak, Playboy stock gave Hefner a $200 million paper net worth. Unfortunately, between 2000 and 2010, Playboy's stock price fell 80% (as magazine sales dwindled). The company was taken private by Hefner and a series of private equity firms. At the time of his death, Hefner technically owned just 35% of Playboy. He owned 100% of the physical magazine, but the magazine has reportedly been losing millions of dollars per year for several years. So it wasn't exactly a shining asset.

We learned a lot about Hefner's finances thanks to his 2009 divorce from Kimberley Conrad. During that divorce, Hefner released a financial statement to the court that listed his net worth at $43 million. It also listed his monthly income at $290,000 and his monthly expenses at $43,000.

Contrary to popular belief, Hefner did NOT own the Playboy mansion. About a year before his death, the private equity firm that owns Playboy enterprises sold the mansion to then 32-year-old Darren Metropoulos for $110 million. The proceeds of this sale did not benefit Hefner. They were 100% used to pay down debt and return invested capital back to the private equity firm. 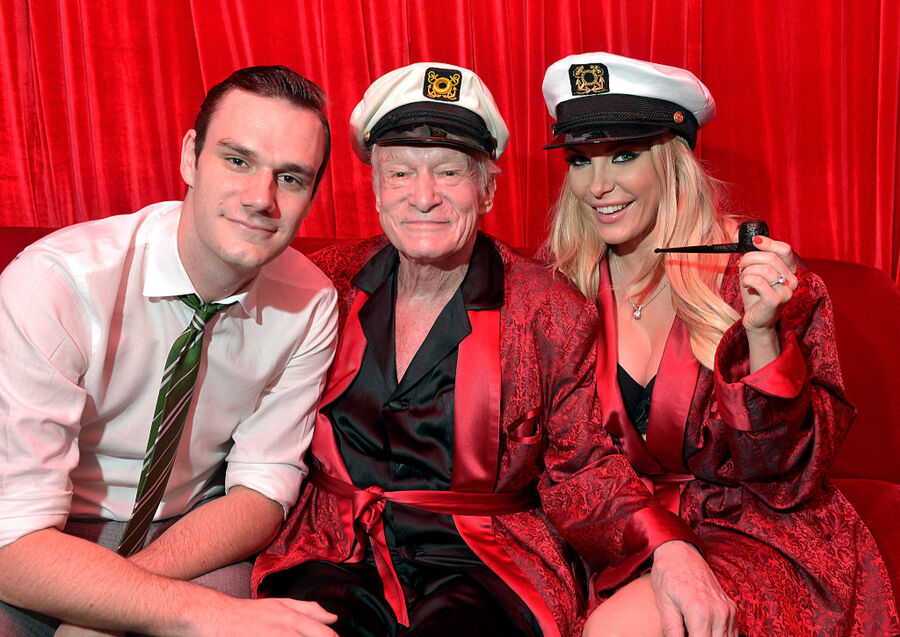 Cooper, Hugh and Chrstal (via Getty)

So Who Inherits Hugh Hefner's Estate?

At the time of his death, we estimate that Hugh Hefner's net worth was $50 million. Hefner was legally married three times. His first marriage ended in 1959 and produced two children, daughter Christie and son David. His second marriage, to Playmate Kimberley Conrad, lasted from 1989 to 2010. This marriage produced two boys, Cooper and Marston Hefner. At the time of his death, Hefner had been married to 31-year-old Crystal Harris since 2012. This marriage did not produce any children.

Hefner was in relationship with Playmate Barbi Benton from 1969-1976. They never legally married. In 1988, one of Hefner's former girlfriends Carrie Leigh, sued him for $35 million. She claimed Hefner promised to marry her and therefore she was owed "palimony". The case was quickly dismissed.

It is not exactly known yet how Hefner planned his estate to be broken up. It's very likely that each of his children will get a chunk of money and an equal share of whatever is left of Playboy. His son Cooper is currently managing the editorial operations of Playboy.

Hefner reportedly ear-marked $3 million in his will to former girlfriend Holly Madison, though this has not been confirmed.

Hefner was also a philanthropist in life and potentially left some money to causes close to his heart. Hefner famously forked over $900,000 in the 1970s to acquire the land near the Hollywood sign and restore the dilapidated sign back to the greatness we see today. He supported gay rights and was a staunch advocate for gay marriage. He was also (not surprisingly) a staunch supporter of free speech, and donated $2 million to endow a chair for the study of American film at USC that now offers a course called "Censorship in Cinema".

As we learn more about Hefner's estate, we will update you!