By Amy Lamare on August 1, 2017 in Articles › Entertainment

The famous Sree Padmanabhaswamy Temple, located in Thiruvananthapuram is known for its vaults full of treasures estimated to be worth $1 trillion. The temple's legend is steeped in mystery and fear. It is rumored that two gigantic and deadly cobras guard the innermost hidden chamber. Like something out of Raiders of the Lost Ark, legend also has it that anyone who opens the vault will suffer disastrous consequences. Naturally, all of this intrigue has fueled the public's fascination with the historic site.

It is a Hindu temple dedicated to Lord Vishnu who is the second god in the Hindu triumvirate. The triumvirate consists of three gods who are responsible for the creation, upkeep and destruction of the world. Vishnu's role is to return to the earth in troubled times and restore the balance of good and evil. So far, he has been incarnated nine times, but Hindus believe that he will be reincarnated one last time close to the end of this world. The Sree Padmanabhaswamy Temple was historically run by a trust controlled by the royal family of Travancore and the temple, along with its assets, belonged to Lord Padmanabhaswamy. However, the Travancore family was removed from temple management by the Supreme Court of India due to gross mismanagement, but we'll get to that in a moment. 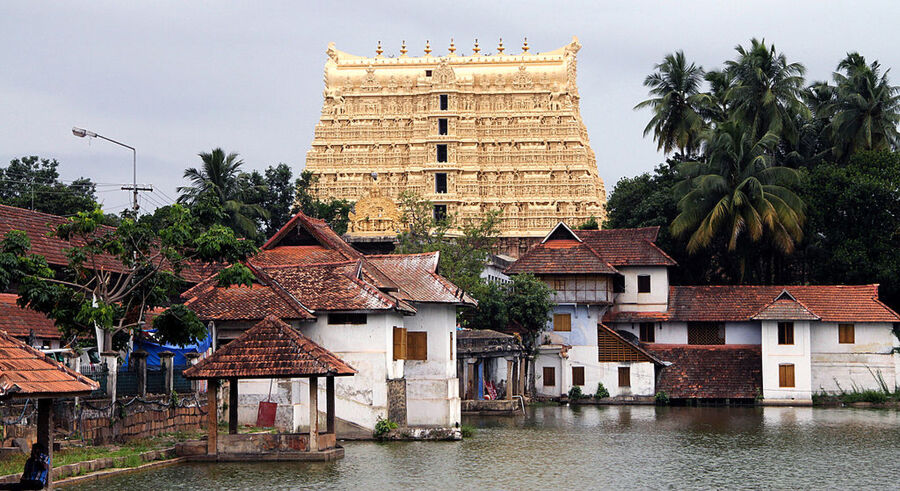 The Sree Padmanabhaswamy Temple dates back to the early medieval period of the sixth through ninth centuries. Additions were made throughout the 16th century. The Temple has six chambers and a number of secret vaults. India's Supreme Court has opened six of the vaults that were found to be located 20 feet underground. Inside those vaults was roughly $22 billion of rare treasures including golden idols, golden elephants, idols wearing 18 foot long diamond necklaces, bags of golden coins, and a 66 one pound solid gold coconut shells studded with emeralds and rubies.

The temple's Vault A contained 2,000 pounds of gold coins that date back to 200 B.C. as well as a solid golden throne that is studded with hundreds of diamonds and other precious stones. The vault also contained solid gold crowns decorated with diamonds. Experts believe that the treasures were accumulated over thousands of years as a tribute to Vishnu.

Vault B is considered to be very mysterious, sacred, and too dangerous to enter. An enormous steel door guards the chamber. The door has two gigantic cobras painted on it. The door has no handle, bolts, locks, latches, or any other way to open it. Indian legend says that the door can only be opened by a high level Hindu with a secret chant. That is the only way to gain access and no one exists in the world today that can do that. Legend also says that if anyone tries to pry open the door using man made tools, disaster will occur in the temple, throughout India, and all over the world.

In 1931, the book "Travancore: A guide book for the visitor" told the story of a group of people who tried to open the vaults and had to run for their lives because the vault was infested with cobras.

A 2012 article by Jake Halpern in The New Yorker Magazine said:

"The doors to Vaults A and B required multiple keys… The observers used the keys to open the metal-grille door to Vault B, and discovered a sturdy wooden door just behind it. They opened this door as well, and encountered a third door, made of iron, which was jammed shut. So they turned their attention to Vault A. Once again, they unlocked two outer doors, one of metal and the other of wood. They entered a small room with a huge rectangular slab on the floor, like a toppled tombstone. It took five men more than thirty minutes to move the slab. Beneath it they found a narrow, pitch-black passage, barely wide enough for an adult to get through, leading down a short flight of steps. Before the observers descended, a team of firemen arrived and used special equipment to pump oxygen into the enclosure. At the bottom of the stairs was the vault."

It is said that despite the darkness of the vault, it sparkled like stars in the night sky due to the piles of diamonds and other jewels sitting on the floor. Temple employees were told to take everything from Vault A upstairs into the light to be examined. It took 15 men all day to accomplish that. The treasure included 100,000 gold coins going back several centuries as well as gold jewelry and the piles and piles of loose diamonds, rubies, and other precious gems. Some of the diamonds were as large as 110 carats. A solid gold idol of Vishnu from the vault was estimated to be worth $30 million by itself.

Vault B remains inaccessible, but the treasures unearthed in the other five vaults are nearly priceless.

Now back to the removal of the Travancore family as managers of the temple. In 2015, India's Supreme Court reviewed a 500-page document that detailed the serious mismanagement and theft of gold by temple management. An audit of the temple's treasures reveled that a massive amount of gold pots and silver bars are missing. It is believed that the treasures were removed from the temple using a secret tunnel beneath the temple.

Experts believe the treasure yet to be discovered in Vault B could be the biggest find in the history of the world. According to legend, Vault B is constructed of solid gold walls and its contents will make the combined treasures of the other five vaults look pitiful in comparison.