In 1984, A Man Memorized A Game Show's Secret Formula And Won A Fortune – Insane Story!

By Brian Warner on September 20, 2018 in Articles › Entertainment

Imagine you've called in sick from work and are watching a marathon of your favorite daytime game show. After the third straight hour of starring at the screen, something very strange suddenly clicks in your brain. Did you just notice a pattern in the game board's electronic formula? That can't be possible… can it? You then proceed to spend the next three straight hours testing your hypothesis, only to conclude that YES, you have indeed somehow figured out the show's secret electronic winning formula. Sounds too good to be true, right? Well, this is precisely what happened in 1984 to an ice cream truck driver from Ohio, named Michael Larson. After watching endless hours of "Press Your Luck" Michael figured out how to memorize the game board's electronic patterns and therefore virtually guarantee a win. If an actual contestant figured out this secret, he or she could use the formula to win a small fortune from the show's parent company, CBS. And that's exactly what Michael Larson did. 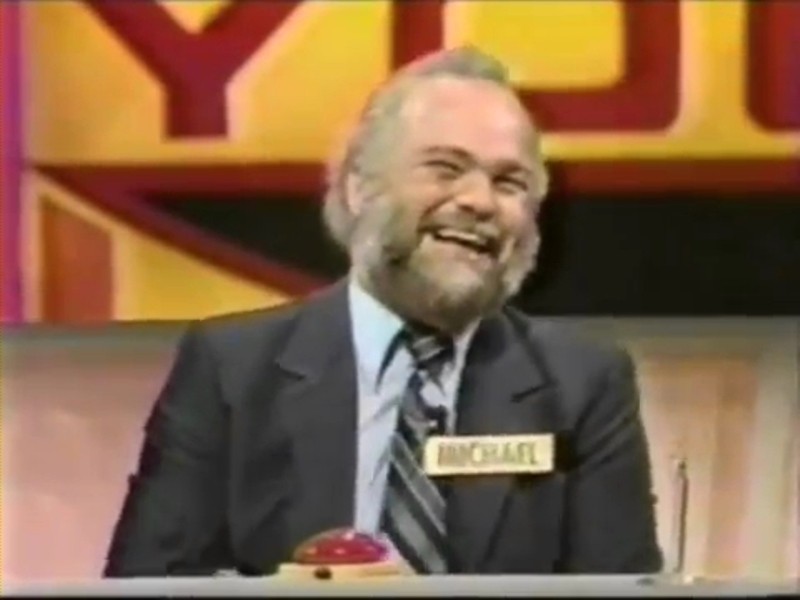 For those of you who may not remember the game show "Press Your Luck", you probably recognize the signature catch phrase contestants would shout while playing their turn: "Come on big money! No whammies! No whammy, no whammy… STOP!" Contestants answered trivia questions in order to earn "spins" on an 18-square electronic game board that contained hidden prizes. The electronic game board was a like a cross between "Wheel of Fortune" and a carnival Whack-a-Mole booth. During a spin, contestants had to press their buttons at just the right time to land on a square that contained a prize. If their timing was off, they landed on a little red cartoon monster called a "Whammy" which would wipe out all their winnings. As long as you didn't land on a whammy, you kept racking up cash and prizes and whoever won the most stuff before the game was over, got to take it all home. This is what the game board looked like, notice the whammies in the upper right corner? 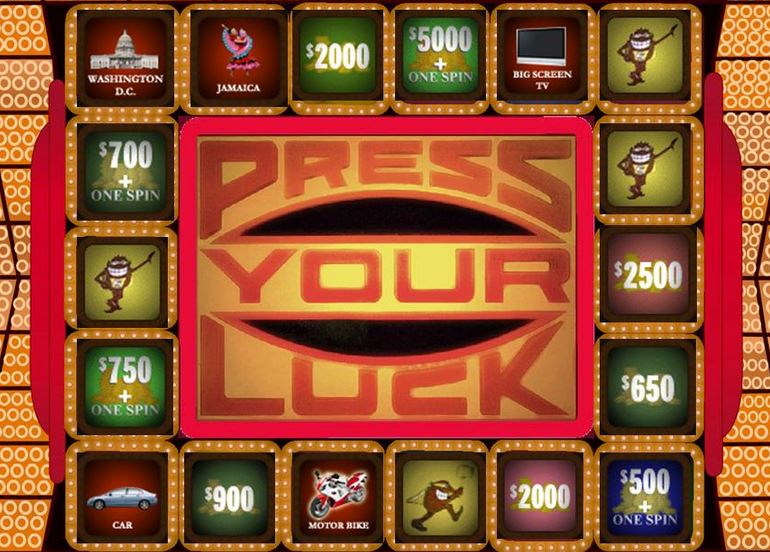 Press Your Luck Game Board

Michael Larson was hooked on Press Your Luck from the moment it premiered on CBS in September 1983. He quickly became a little morbidly obsessed with trying to find a way to beat the game. Michael would record every episode with his VCR then use the pause button to analyze the game board, frame by frame, looking for a weakness to exploit. After weeks of painstaking analysis, Larson was actually able to find a pattern in the game board's movements. Specifically, he realized that the #4 and #8 squares never contained a whammy and that their prizes continuously increased in value. Landing on either of those squares also rewarded the contestant with an extra spin. The second big realization was that the board's bouncing prize selector did not follow a random algorithm, it actually alternated between five easy to memorize patterns that determined where the contestant would land when the stop button was pushed. Put in simple terms, Michael knew exactly how to time the game board's shifting patterns so whenever he pushed the button, he would always land on either #4 or #8, the only two squares that never contained whammies.

After practicing his strategy for six months, in May 1984 Michael Larson traveled by bus from Ohio to Los Angeles to audition for Press Your Luck. During a pre-audition interview, Michael spun a sympathetic tale. He explained that as an unemployed ice cream truck driver, he couldn't afford to buy a present for his daughter's upcoming sixth birthday. He hoped that by winning on Press Your Luck, he would be able to give his daughter the best birthday of her life. Irresistible, right? After doing a practice round to show he understood the basic concepts of the game, producers informed Michael that he would officially be a contestant on an upcoming episode of Press Your Luck.

On Saturday, May 19th 1984, Michael took the center seat on Press Your Luck's stage in between a Baptist minister named Ed and dental assistant named Janie. As always, the first round of the game consisted of simple trivia questions in order to win spins. Compared to his fellow contestants, Michael pretty much bombed the trivia round. He fumbled on several questions and ended up with only three spins. By comparison, fellow contestant Ed won 10 spins. As the player with the fewest spins, Michael got to Press His Luck with the game board first. 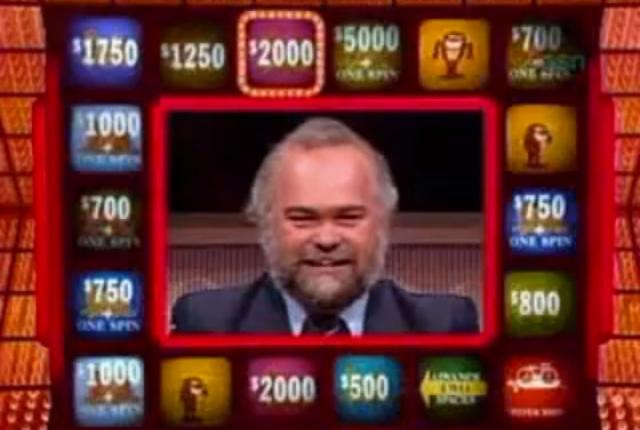 Pause for a second and think about what Michael must have been feeling at this moment. He had just spent six straight months almost entirely dedicated to practicing his secret formula on home recordings of Press Your Luck. He survived a sweltering five-day Greyhound bus ride from Ohio to Los Angeles and somehow managed to squeak through the audition process. After all this work, he was finally about to put his theory to work on a live round of Press Your Luck. So what happened on Michael's first spin? He landed on a whammy. To this day, no one knows for sure if this was an accident or merely a ploy to throw people off his true intention, but judging by Michael's jovial reaction, it was probably intentional. Not surprisingly, Michael landed on winning squares with his next two spins before he had to pass off to the other contestants. At the end of round one, Michael was still in last place with $2,500, compared to Ed with $4,080 and Janie with $4,608.

The second round began with a some slightly easier trivia questions to allow players to earn lots of spins. Michael performed much better this time around and ended up with seven total spins. Since he was still in last place, Michael got to spin first. Armed with seven spins, Michael made his move. By concentrating with deadly accuracy the #4 and #8 squares, Michael proceeded to go on an astonishing tear. His prize total quickly climbed from $2,500 to $10,000 to $15,000 to $30,000 and up. Keep in mind that prior to Michael Larson, the average Press Your Luck grand prize winner walked away with around $10,000, total. Even $30,000 would have been an extraordinarily large prize for any game show at the time. But Michael did not stop there. After 13 spins, his total prize had risen to $32,351. After 21 straight winning spins his total rose to $47,601. At this point, the show's control booth was filled with anxious CBS executives. Could this nightmare scenario really be happening? How stupid could they be to have two squares that never contained a whammy? Could they even legally stop the game at this point or did they have to ride it out? Here is actual footage of Michael during the peak of his streak:

Meanwhile, with each new spin the show's host, Peter Tomarken, was beyond flabbergasted. Not realizing that Michael was using a strategy, Tomarken begged him to stop pressing his luck. Tomarken wasn't begging for the sake of the increasingly anxious CBS executives who were sweating bullets in the control booth, he honestly was just worried that Michael eventually had to land on a whammy and wipe out all his earnings. But Michael pressed on for 40 consecutive winning spins to rack up a mind boggling $102,851 in cash and prices. But it didn't stop there…

After crossing the $100,000 mark, Michael finally decided to stop pressing his luck and pass his four remaining spins to fellow contestant, Ed. On Ed's first spin, he landed on a whammy and wiped out his $4080. Ed came back to win $10,000 before whammying a final time to end his game altogether. That left Janie who still had $4,608 and four spins remaining. Like Ed, she landed on a whammy with her first spin. She then went on a quick streak and upped her winnings to $9,835. At this point, Janie passed her remaining three spins to a stunned Michael. Michael clearly was not expecting to have to spin again. But again he hunkered down, applied the strategy and ended up increasing his winnings to $110,237 before the game finally ended. That's equal to roughly $250,000, when adjusted for inflation. 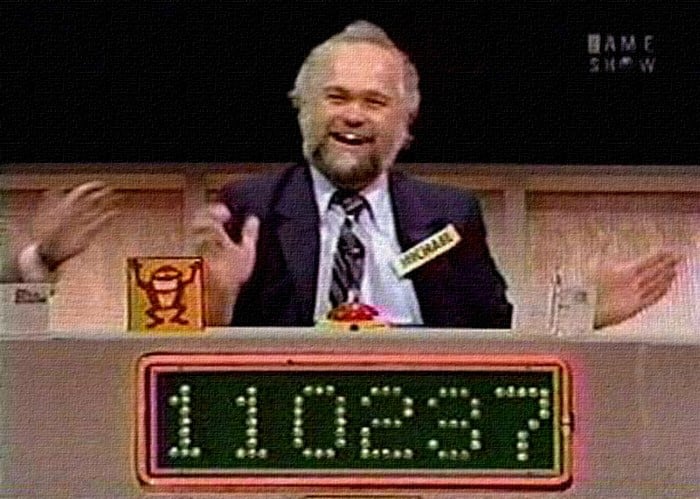 About halfway through his winning streak, CBS executives realized what was happening and promptly contacted their legal department. The head of CBS daytime programming, Michael Brockman, would later tell an reporter: "Something was very wrong. Here was this guy from nowhere, and he was hitting the bonus box every time. It was bedlam, I can tell you. And we couldn't stop this guy. He kept going around the board and hitting that box." Immediately after the taping, Brockman and CBS lawyers reviewed the tapes and quickly noticed two very alarming facts. First, they realized that Michael somehow managed to exclusively land on the #4 or #8 squares which always contained a prize. Second, they noticed Michael's celebration after each spin came a little too quickly, like he knew what was coming. With these findings, CBS was convinced Michael cheated and initially refused to pay him the $110,237. Unfortunately, when they consulted their own rule book, they could not find any clause that could be used to disqualify a contestant for what Michael had done. Was it technically even cheating? One thing they were able to do was ban Michael from ever appearing on another CBS game show for the rest of his life. They also moved quickly to try and fix the flaws that allowed someone to memorize their patterns and avoid whammies. The infamous Michael Larson episode aired in two parts in June 1984, before embarrassed CBS executives banned the program from airing. The episode wasn't shown again for 19 years, until finally in March 2003, the Game Show Network was given permission to air segments as part of a two hour documentary about Michael's life and the infamous incident.

In the end, Michael was eventually paid his money, but unfortunately, his luck in life pretty much peaked that day in May 1984. Roughly half the money went directly to taxes, some was kept in savings, another chunk was invested in real estate and the rest was poured into a series of get rich quick schemes. The real estate investments turned out to be a ponzi scheme and after the other get rich schemes also failed, Michael was forced to get a job as an assistant manager at Wal-Mart. He again became obsessed with finding another way to get back on top. He stopped trusting his bank and eventually began hiding his remaining prize money plus life savings, roughly $50,000, in garbage bags around the house. One night after attending a Christmas party with his girlfriend, Michael returned home to find that his entire fortune had been stolen. Livid, he accused his girlfriend of taking the money. They screamed at each other until she finally walked out forever. Michael made a handful of television appearances to discuss his infamous day on Press Your Luck but otherwise slipped back into obscurity. As a final attempt to make a quick fortune, Michael got swept up in an illegal pyramid scheme called Pleasure Time Incorporated that stole $3 million from 20,000 investors who thought they were buying shares in a Native American lottery company. With a warrant out for his arrest and agents from the FBI, SEC and IRS hot on his tail, Michael was forced to live the remaining years of his life on the run. He died on the run in 1999 from throat cancer in Florida. A sad ending to a clever man with a dream who beat the system but didn't know how to walk away. Just like most gamblers.