If The Astros Win The World Series, Furniture Tycoon "Mattress Mack" Will Win The Largest Payout In Sports Betting History. If They Lose…

By Brian Warner on October 27, 2021 in Articles › Entertainment

Back in 1981, Jim McIngvale used his life savings, a total of $5,000, to open a furniture store. Times were tough in those early years, as they are for many small businesses just getting off the ground and then but Jim was nearly wiped out when oil prices crashed in the early 1980s, decimating the Houston economy. In 1983, a desperate McIngvale took his last $10,000 and decided to invest in a series of local commercial spots.

During the filming of one of those spots, he got frustrated while cameras were rolling and proceeded to pull money out of his pockets while declaring "Gallery Furniture saves you money!" The crew loved the line and kept it in the final cut. Pretty soon it became his trademark. Here's an example of a commercial from 1986:

In those early days, Gallery Furniture focused on affordable mattresses, bedroom sets and living room furniture. Over time it also began offering mid-to-high end items for every room in the house. Business grew and grew. And thanks in no small part to those constant commercials, Jim earned a new nickname:

Today Gallery Furniture is one of the most-successful independent furniture retailers in the country. Its stores have at various times achieved the highest level of sales-per-square-foot of any store in the US. The privately-held business earns an estimated $200 million in revenue per year.

Outside of his furniture fame, Mattress Mack has earned headlines over the years for two reasons:

Over and over, Mattress Mack has opened his heart, his wallet and his doors when disaster strikes.

During Hurricane Harvey in 2017, the horrible floods caused be 2019's Tropical Storm Imelda and 2021's Hurricane Ida, Jim was quick to open his stores up to displaced and desperate people. His stores became shelters and organizational posts where hot meals and supplies were dispensed at his expense. 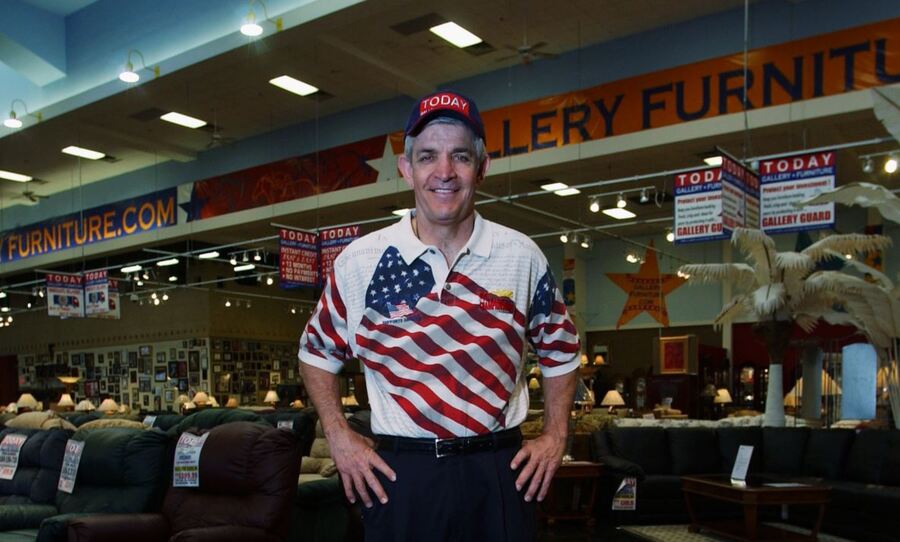 Mattress Mack is best-known on a national level thanks to his aggressive sports bets and refund promotions.

His first headline-grabbing bet was placed in 2014 ahead of the Super Bowl. If the Seahawks won, Jim offered to refund any purchase over $6,000 made in the previous two weeks. The Seahawks did win and Mack provided $7 million worth of furniture refunds.

Mack loves nothing more than to bet on his beloved Houston Astros.

When the Astros won the World Series in 2017, he refunded $10 million worth of customer purchases.

At the beginning of the 2019 MLB season, Mack offered refunds on any purchase over $3,000 if the Astros made it to the World Series. They made it. Those refunds cost over $20 million. To hedge his potential losses, Jim began placing bets that the Astros would win the series. By October 29, 2019, the night of game 6, Jim had wagered $13 million over a series of bets. The Astros ultimately lost the series, costing Jim an additional $13 million. OUCH.

To hedge his liability, Jim has placed $3.45 million worth of bets across a half dozen sports books. If the Astros win, his bets will payout a little more than $39 million. That's a profit $35.6 million, which is more than enough to cover $22 million in refunds.

According to Caesars in Vegas (who would be on the hook for around $20 million of his win), if Mattress Mack wins, it will be the largest single payout in sports betting history.

World Series Game 1 is Tuesday night at 5pm PST with the Astros hosting the Braves. Keep an eye out for Mattress Mack in the stands!

Is this Bet Insured?

After we published this article, a few readers reached out to say that Mattress Mack's promotion might be insured, like hole-in-one or half-court shot insurance. From all the sources I've found, Mack's bet is NOT insured. If he ends up providing $20 million in refunds, it's a pure business expense.

Think about this way –

The Astros essentially have a 50/50 chance of winning the World Series. Is there an insurance company that would provide insurance on a $20 million liability that has a 50/50 chance of hitting? For comparison, according to some quick stats I found on Google, the national average for hitting a hole-in-one is 12,000 to 1. Those are MUCH more insurable odds.