By Amy Lamare on January 14, 2016 in Articles › Entertainment

A decade ago, Julie Rice and Elizabeth Cutler met at a lunch date – a blind date, of sorts – and a connection was made. Both shared a common vision. They wanted to create a luxury cycling studio. Ten years later, the co-founders of the immensely popular and successful Soul Cycle joke that it was the best blind date either of them ever went on.

Julie Rice was a former Hollywood talent agent who managed her stress with spin classes. When she moved to New York City in 2002, she had a hard time finding the same kind of workout. She visited gym after gym, but she didn't find the intensity she wanted.

In early 2006, an indoor cycling instructor she had gotten to know introduced her to former real-estate broker Elizabeth Cutler, who wanted to start her second career as the founder of a fitness studio. The three of them decided to partner up to create a luxury cycling studio.

Several months later, the trio opened their first Soul Cycle location in an old dance studio on Manhattan's Upper West Side. The cycling instructor Rice and Cutler had partnered with soon left to start a rival studio called Flywheel. Rice and Cutler forged on, looking for ways to make their cycling studio stand out. They created Soul Cycle's signature cycling routine, a 45-minute, full body workout designed to get cyclists leaner. Then they added dim lighting and scented candles to give the workout a spiritual vibe. To make the workouts more fun, they placed a big emphasis on music. Every single class has its own custom playlist so that every workout feels like a brand new one. 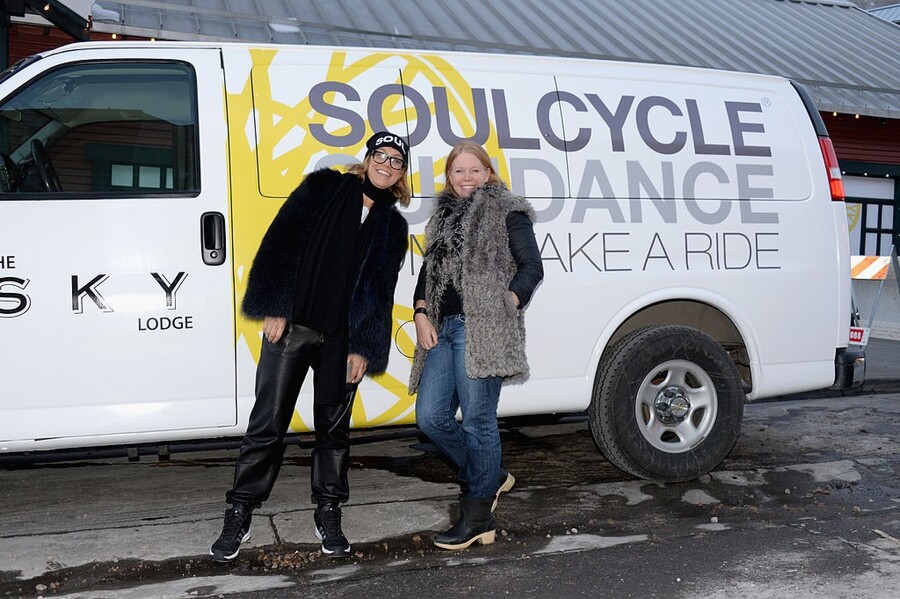 It wasn't always easy going for the fledgling fitness brand. One of the biggest mistakes Rice and Cutler made in the early days was leasing their first studio space in a building that didn't allow them to have outdoor signage. To get the attention of people passing by and draw in new customers, the duo bought a rickshaw off of eBay, painted it bright yellow, slapped the words Soul Cycle on the side, and pointed it toward their front door. They got $65 tickets nearly everyday for parking the rickshaw on the sidewalk illegally.

Rice and Cutler also went through the studio's neighborhood daily trying to coerce doormen into letting them into apartment buildings so that they could distribute fliers. They gave free classes to charities and schools. They took what remained of their start up budget–a mere $2,500 – designed Soul Cycle t-shirts, printed up 200 of them, and begged their friends to wear them.

Six months after the first Soul Cycle opened, it was not just profitable, it was a sensation. Classes were sold out and had long waiting lists. Today Soul Cycle has 46 locations coast-to-coast and employs 1,500 people. The boutique fitness chain has a cult-like following that has drawn in everyone from your next door neighbor, to celebrities to Michelle Obama. Soul Cycle is the most popular luxury cycling brand in the United States.

All Soul Cycle employees must undergo hospitality training at its "Soul University." Instructors are taught everything from how to create emotional peace in their classes, to how to put together a dynamic playlist for the class. Even high-ranking executives go through this training and work at a studio's front desk so that they know how the company operates.

Part of the key to this success is the fact that Rice and Cutler had entire careers before founding Soul Cycle. They are in their mid-to-late 40s. They knew that they wanted to create a different environment, not just for their clients, but for their employees. They started out by forging a unique identity. Rice and Cutler always looked at Soul Cycle as a luxury brand first and a fitness studio second. Rather than emulating other fitness companies, they looked to companies they admired, like Apple, for inspiration.

Cutler's background in real estate gave her the know how to handle property and business development. Rice's background as a talent agent is still in use, though these days she is scouting for dynamic and motivating instructors rather than potential movie stars. Soul Cycle auditions 150 aspiring instructors for every 20 hired. Those selected, undergo two months of training. Instructors are trained to treat clients like family. If a client is sick or injured and misses two weeks of classes, someone from their Soul Cycle studio will call them to check up on them. Soul Cycle has been good at doing many things, but possibly creating that sense of community and a tribe has been what they've been the best at doing.

A Soul Cycle class is a spiritual experience. Soul Cycle sells euphoria and people are buying it like crazy. The company charges $34 per class and brought in total revenue last year of $112 million. That's up 76% from the $36.2 million in total revenue the company had in 2012. Oh, and in July 2015, Soul Cycle filed documents with the SEC to go public. Not bad for a company that isn't quite a decade old yet.