How Scott Storch Blew Through A $100 Million Fortune

By Brian Warner on January 27, 2022 in Articles › Entertainment

Aerosmith front man Steven Tyler once admitted to an Australian news program that in his lifetime he wasted $6 million on cocaine. Tyler also explained that his cocaine habit cost him a marriage and severely damaged his relationship with his children. Tyler's admission is stunning. I can't imagine a world where $6 million of my money would be wasted in such a horrendously irresponsible way. And while Steven's admission may have raised some eyebrows, it absolutely pales in comparison to the life story of hip-hop producer Scott Storch.

Storch, who produced some of music's biggest hits between 1999 and 2006, literally makes Steven Tyler look like a complete chump. During his career, he amassed an impressive $100 million fortune churning out hits for artists like Dr. Dre, Christina Aguilera and 50 Cent. Unfortunately, while he rose the ranks of the music world, Storch also amassed one hell of a cocaine and luxury spending habit. Storch would eventually blow through the entire $100 million fortune and declare bankruptcy. If that's not shocking enough, incredibly he somehow wasted $30 million in less than six months. How in the world did this happen and what is Scott Storch up to now? 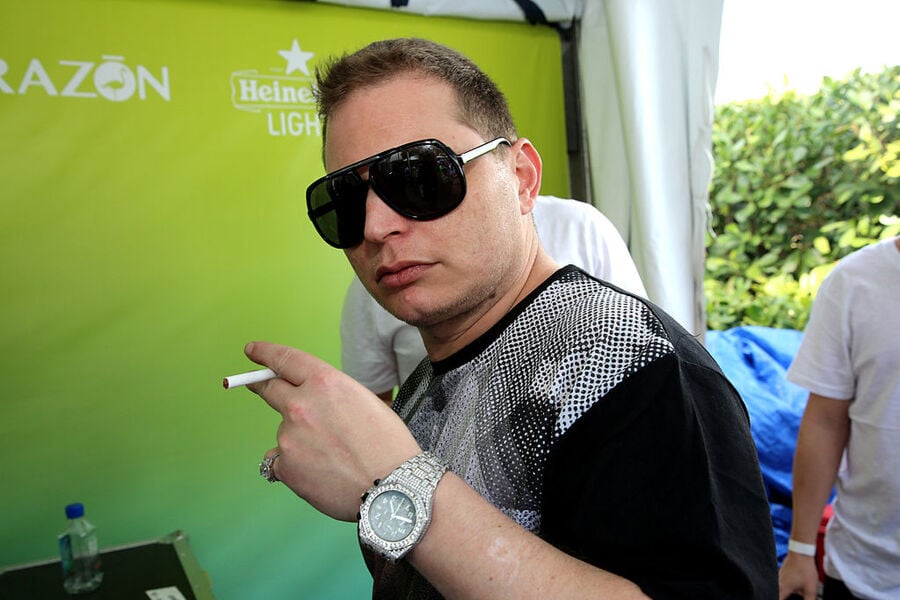 Early Life And Rise To Stardom

Scott Spencer Storch was born on December 16, 1973 in Long Island, New York. His mother was a singer and his father was a court reporter. His uncle Jeremy founded a soul rock band called The Vagrants and performed on the side for artists like Eddie Money and Dave Mason. His parents divorced when Scott was 10 and he moved with his mother to Florida. High school was rough for Scott, so in the middle of his first year, he moved up to Philadelphia with his dad. He never made past the ninth grade. When he was 18 years old, Scott and his father moved to Cherry Hill, New Jersey where they had family nearby. One of those nearby family members was Scott's cousin. This cousin introduced Scott to the world of music.

He slowly began producing beats and rising the music ranks. In 1991 Scott was hired to be a keyboard player for the hip hop group, The Roots. His rise to producer stardom did not take long.

Dr. Dre's "Still D.R.E" was Scott's first massive commercial hit. He followed up with songs like 50 Cent's "Candy Shop", Fat Joe's "Lean Back", Justin Timberlake's "Cry Me a River", Beyonce's "Me, Myself and I". He actually produced hundreds of hit songs during his prime.

At his peak, Storch would sell each track for $100,000. In 2005 alone, Storch produced more than 80 tracks for some of music's biggest stars and was considered the hottest maestro on the planet. He was even named ASCAP's Songwriter of the Year for 2006.

Not surprisingly, Scott's lifestyle quickly reflected his new-found fame, success and fortune. He dated some of the hottest women on the planet and Paris Hilton (zing!). He also began spending money at a furious pace. Storch owned a car collection that would impress Jay Leno. His fleet was made up of 20 high-end luxury cars that cost $250,000 – $700,000 a piece. Storch's collection included a Bentley, Maybach, Ferrari, Lamborghini, Bugatti Veyron and a limited edition McLaren SLR just to name a few. Storch admitted that he would wake up, blow some coke, and then head straight to the car dealership where he would drop hundreds of thousands of dollars, on a whim. He claims he bought at least 10 cars while high on cocaine.

Storch set up shop in a $10.5 million mansion on Miami's ultra exclusive Palm Island which he bought in 2006, right at the peak of the real estate bubble. The house was a 30,000 square foot, waterfront mansion that had nine bedrooms, an indoor pool, spa, movie theater, fitness center and game room. In front of the mansion, Storch parked his 117 foot, four bedroom $20 million yacht which he named "Tiffany".

Fast forward a few years, and a bank was forced to repossess both the yacht and the mansion due to lack of payment. Interestingly, in 2010 the house was bought out of foreclosure by Rockstar Energy Drink founder Russell Weiner for $6.75 million. Weiner owned it until October 2012, when he flipped it to rapper Birdman for $14.5 million. Storch also failed to pay as much as $700,000 in property taxes from the mansion to the IRS.

In addition to houses, cars, and yachts, Storch also had a penchant for expensive jewelry. He showered himself and his girlfriends with millions of dollars worth of diamonds, $100 thousand watches, necklaces and more. His left index finger was permanently adorned with a 32 carat canary yellow diamond ring that cost an estimated $7 million.

He also did not exactly fly coach. Whenever Scott traveled, it was by private jet, no matter the distance. While that may not be surprising, keep in mind that even some of the richest celebrities in Hollywood choose to fly commercial when they are going around the world because private jets cost so much money per hour. Storch, on the other hand, was not shy about spending $250,000 to fly his entourage to the French Riviera for a last-minute vacation. Mind you, that's $250,000 each direction! Perhaps the most jaw dropping aspect of Scott's story is that he spent a mind boggling $30 million in a six month coke fueled binge. By his own estimation, Scott was spending $250,000 a month on partying alone, at his peak.

In July 2018, Scott Storch visited Hot 97 and opened up about what it was like to lose $100 million, how it happened and how he is trying to pull himself back up. Check out the interview below, it's pretty amazing:

Scott's incredible rise and fall started to unravel in 2007. His hard partying ways began to affect his music. He stopped working for long periods of time and would make A-list musicians wait for hours upon hours at his studio. Storch reportedly made super star Janet Jackson wait 10 hours at the studio while he partied away. As this negative reputation spread, fewer artists lined up to buy Storch's beats. And as the money slowed down, his spending did not. By 2009, Storch had managed to blow through his entire $100 million fortune and was forced to declare bankruptcy. He was arrested on cocaine charges in Vegas in 2012.

So what's the lesson here? I mean, there are a hundred. Don't do drugs. Don't waste money on unnecessary lavish gifts. Don't date Paris Hilton. And most important of all, when you're doing well, put some damn money in the bank for a rainy day!!!