By Mark Kurlyandchik on January 8, 2018 in Articles › Entertainment

Oprah Winfrey, sometimes referred to as "Lady O" or the "Queen of Talk", is undoubtedly media royalty. As a talk-show host, producer, actress, and philanthropist, everything Oprah touches turns to gold. Best known for her award-winning, nationally syndicated talk show, The Oprah Winfrey Show, Winfrey is one of the wealthiest African Americans of the 20th century and the most generous black philanthropist in American history. At one time, Oprah was the world's only black billionaire. In an average year, Oprah pulls down anywhere from $75 – $300 million in income and currently has a personal net worth of $3.2 billion. But perhaps what's more incredible than Oprah's immense power and wealth is the fact that it all came from nothing. The story of Oprah's rise literally from rags to riches absolutely inspirational.

Winfrey's childhood was nothing short of dark and tumultuous. She was born on January 29, 1954, in rural Mississippi, to Vernita Lee. Her mother was single and just a teenager when she had her daughter, so Oprah went to live with her grandmother, on her farm in Mississippi. Her grandmother was so poor Oprah was forced to wear potato sacks as dresses and was ridiculed by the neighborhood children. When Oprah was 6, her grandmother fell ill, so she was sent back to live with her mother and half-sister in a Milwaukee boarding house. Relying on welfare and what little her mother earned cleaning houses, the family was barely scraping by. About a year later, Oprah was sent to live with her father, Vernon Winfrey, and stepmother in Nashville. The couple was glad to have her, since they were not able to conceive a child of their own. Life became a bit sunnier for Oprah. She finally had a bedroom to herself, excelled in school, and was part of the local church. 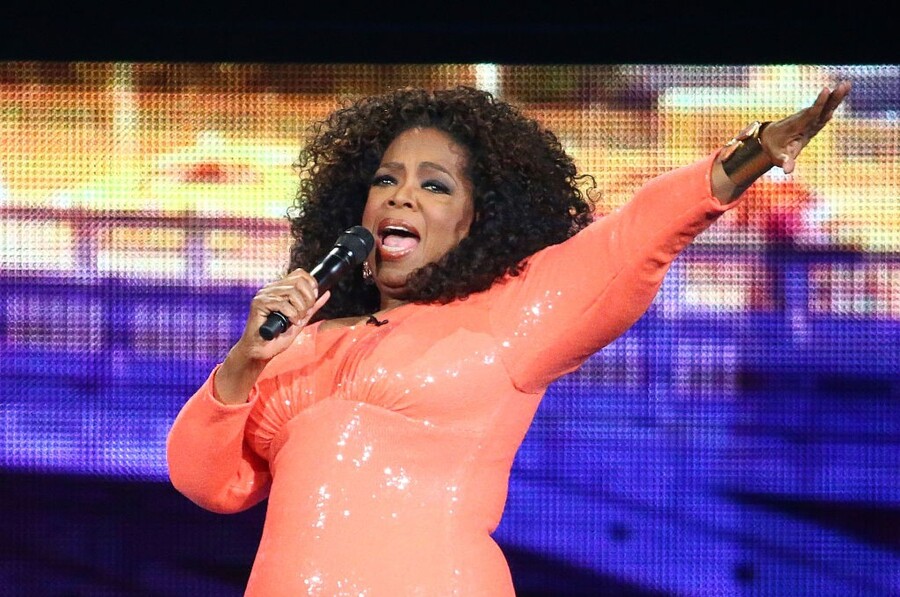 But darker days still loomed ahead. At the end of third grade, Oprah was sent to stay the summer with her mother, who had given birth to a boy while Oprah was in Nashville. That fall, Oprah chose to remain with her mother and half-siblings instead of returning with her father. At age 9, Oprah was raped by her 19-year-old cousin, who had been put in charge of watching her and her siblings. Just a few years later, she was sexually abused by her uncle, as well as a family friend. After 13 years of suffering this abuse silently, Oprah ran away from home. At 14, she became pregnant, only to have the baby die two weeks after his birth.

A rough entry into high school — classmates taunting her background of poverty — caused Oprah to rebel. She stole from her mother, lied, and dated older boys. Frustrated by her inability to control her daughter, Oprah's mother sent her, again again, to live with her father, who was strict and placed a great deal of importance on education. It was under his care that Oprah, once again, began to thrive. She attended East Nashville High School, where she became an honor's student. She was on the speech team, and was voted Most Popular Girl in her class. She even won a full scholarship to Tennessee State University in an oratory contest. At 17, Oprah was awarded first place at the Miss Black Tennessee Beauty Pageant. During her senior year at East Nashville High, Oprah was hired by WVOL, the local black radio station, as a part-time news correspondent, where she worked through her first two years of college.

At 19, Oprah left school to pursue a career in media. After a few stints as a local anchor, she relocated to Chicago in 1983 to host WLS-TV's morning talk show, AM Chicago. Within a few months of the show's first air date in January 2, 1984, Oprah brought the ratings from dead last to the highest-rated talk show in Chicago. By September 8, 1986, the show was renamed The Oprah Winfrey Show, broadcast nationally, syndicated, and expanded to a full hour. In the beginning, the show only targeted women's issues, but was later expanded to cover such topics as health, spirituality, social issues, and charity.

In addition to being a celebrated talk show host, Oprah has also been involved in numerous films, television series, and plays. In 1985, she made her film debut as Sofia, the distraught housewife in The Color Purple, for which she was nominated for an Academy Award for Best Supporting Actress. The film was later adapted as a Broadway musical in 2005. Oprah was a producer. In 1989, she co-starred in and produced The Women of Brewster Place, a drama miniseries that was followed by the brief spin-off, Brewster Place. In 1998, Oprah produced and starred in the film based on Toni Morrison's novel, Beloved.

Oprah is a bonafide media titan. In 1986, she founded Harpo Productions, which includes Harpo Films, Harpo Radio, and Harpo Studios. This allowed her to be the executive producer and majority owner of The Oprah Winfrey Show and therefore entitled her to the lion share of any profits. During the peak of her show, it was not unusual for Oprah to earn $300 million per year. Through Harpo, she makes also millions every year off Rachel Ray, Dr. Phil and Nate Berkus. Not to mention her magazine, radio show, endorsements, merchandise… In 2011, she launched the television network OWN: Oprah Winfrey Network. From 2004 to 2008, in partnership with Hearst Magazines, she published her own magazine, O, The Oprah Magazine. In 2006, Oprah announced that she signed a $55 million, three-year deal with XM Satellite Radio to start her own radio channel, Oprah Radio.

Oprah is also an active philanthropist. In 1998, she co-founded Oxygen, a women's cable network. That same year, she created the Oprah's Angels Network, a charity that provides grants to nonprofit organizations. All administrative costs are covered by Oprah herself, so 100 percent of the funds go to the charity. In addition to all she's accomplished, Winfrey has houses in California and New Jersey, an apartment in Chicago, a ski house in Colorado, an estate in Florida, and property on Maui and Antigua. And, as you might have guessed, she no longer wears potato sacks!