By Brian Warner on May 4, 2019 in Articles › Entertainment

George Lucas is a very rich man. In fact, out of all the extremely rich celebrities on the planet, George Lucas is the most extremely rich celebrity, with a personal net worth of $5.4 billion. That's enough to make him $1.7 billion richer than his good buddy Steven Spielberg. That makes him $1.9 billion richer than Oprah! What's perhaps most incredible about the Lucas fortune, at least compared to other entertainment billionaires, is that George essentially made vast majority of his fortune solely from one idea: Star Wars.

As a director, George's resume is actually pretty thin. Technically speaking, Lucas has only directed six feature films in his entire career, and four of them were Star Wars movies. By comparison, Steven Spielberg has directed more than 30 different feature films, many of which went on to become some of the most successful classic films of all time. So how did George Lucas generate such a huge personal fortune from a single movie franchise?

It all comes down to one incredibly simple, yet amazingly brilliant billion-dollar decision in 1973… 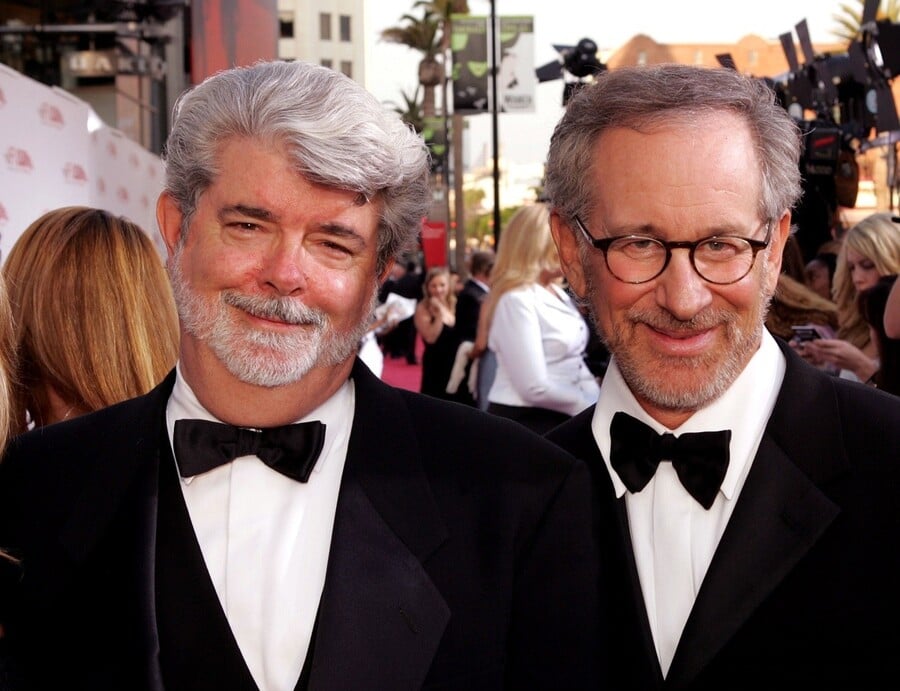 Prior to 1973, George Lucas was still very much struggling to make his way in Hollywood. His first major directorial debut was 1971's THX 1138, which starred Robert Duvall in a futuristic world, where android robots control society with drugs that suppress human emotions. Lucas' next movie was 1973's American Graffiti. Unlike THX 1138, American Graffiti was a monster hit. It eventually became one of the most profitable movies of all time, earning $200 million with a budget of just $775,000. It was also nominated for an Academy Award for Best Picture, Best Director, Best Original Screenplay, Best Supporting Actress and Best Editing. Lucas was now a hot commodity.

Lucas first had the idea for what he described as a "western set in space," called The Star Wars, in 1971. He worked on the script for the next two years, while his personal debt mounted and his film career floundered. After the massive success of American Graffiti, Lucas was in the best possible position to negotiate for his next film. He earned $150,000 for directing American Graffiti and his managers encouraged him to ask for a huge salary bump. Simultaneously, an executive at 20th Century Fox studios, named Alan Ladd, Jr., loved American Graffiti but did not understand this "Star Wars" concept. Despite the fact that no other executive at Fox thought the movie would be a success, Ladd was able to secure Lucas a deal to direct the film beginning in 1976 for a budget of $8.25 million. The final budget eventually swelled to $11 million.

Thanks to the success of American Graffiti, Lucas was entitled to a salary of $500,000 for directing what was now being called simply "Star Wars." Instead of accepting the nearly 300% pay raise, George approached the Fox executives with a proposition. George generously offered to keep his salary at $150,000 in exchange for two seemingly insignificant requests: #1) That he retain all merchandising rights, and #2) that he would retain the rights to any sequels. As crazy as it sounds now, at the time this was actually a fantastic deal for the studio. Fox had previously lost a fortune in the merchandising business with monumental failure of 1967's Doctor Dolittle, so they weren't exactly dying to get back into that world. Moreover, merchandise just wasn't a meaningful revenue stream in general back then. As for sequel rights, these were also not an important factor for Fox considering the fact that no executive thought the movie had a snowball's chance in hell of making money the first time around. So off George went to finalize his script with $150,000 and a what seemed like an incredibly naive contract in his pocket.

But the real money for George didn't come from box office receipts. Between 1977 and 1978, Star Wars sold $100 million worth of toys. 35 years later and Star Wars themed toys have generated $12 billion in revenue. Today, Star Wars licensed toys produce $3 billion a year in revenues. And keep in mind, after the first film George owned 100% of the rights to the entire franchise. The next five Star Wars movies would go on to earn an additional $3.5 billion at the box office. In total, the Star Wars empire has sold $4 billion worth of DVDs and VHS, $3 billion worth of video games, $2 billion worth of books and another $1.3 billion through various other licensing deals. That brings the grand grand revenue total after 35 years worth of Star Wars licensing to $27 billion. After expenses, taxes, fees, etc. George Lucas had earned himself an impressive $3.3 billion net worth by 2012. Then, Disney came calling.

Back in 2012, Disney paid George $4 billion to purchase the entire franchise outright.

Without retaining these rights, Lucas would have done very well, but his earnings would have been a tiny fraction of what they became. This windfall would not have been remotely possible if it wasn't for that single brilliant decision made back in 1973. George Lucas essentially traded $350,000 for more than $5 billion. That might be the smartest business decision of all time! So the lesson here is, if you believe in your idea, don't give up your rights easily!