How Much Money Is Left Behind In TSA Bins Every Year? Where Does The Money Go? What About All The Snow Globes, Guns And Grenades?

By Paula Wilson on April 8, 2015 in Articles › Entertainment

How many times has this happened to you? You're running late for a flight and you get to the that dreaded part of every major trip called airport security. You start to go through the scanner, but you've forgotten to put all of the change from your pockets into one of the security containers. So you quickly dump everything out of your pockets, dash through the scanner, grab all of your stuff, stumble into your shoes, and sprint for your gate. Well… you grab the important stuff, at least. However, it seems like a lot of us forget to go back and get that pocket change. In fact, we leave so much change behind, that the TSA is actually using it to fund improvements in aviation security. Just how much do we leave behind? Try a whopping $2.7 million over the course of the last five years!!!

The Transportation Security Administration, more commonly referred to as the TSA,  was established on November 19, 2001, and was originally part of the United States Department of Transportation. In March of 2003, it became a branch of Homeland Security. The purpose of the organization is to develop policies and practices focused on airport security, the prevention of hijacking, and security and safety with regards to all modes of transportation, including railroads, buses, mass transit, ports, etc. The organization has a budget of approximately $7.39 billion and employs over 55,600 people. Though the TSA's organizational mission covers all modes of transport, most of their focus is on airports, and that's where they collect the bulk of their "found" cash. If anyone comes back to the airport to reclaim their money, it has to be returned. However, most people never come back. In 2005, Congress gave the TSA the right to use the money as the organization saw fit.

If someone leaves a large sum, or a personal item of great value, the TSA is required to try to track the person down and return the money. However most times, the amount of change that gets left behind, dropped, or spilled, is small enough that tracking the passenger down would not be cost effective. Additionally, turning around and going looking for dropped loose change is not a high priority on most traveler's minds as they rush through the airport. The end result, is that the TSA keeps most of it. Interestingly, the amount of money being left at airports each year has been increasing almost exponentially since 2008. In 2008, we left $383, 414 at airport security. That number increased to approximately $488,000 in 2011. Then it jumped again to $531,000 in 2012. In 2014, passengers were apparently even more forgetful. Last year we left $675,000 at airport security.

At most airports around the United States, loose or dropped change is collected and turned into the TSA's Financial Office. Some airports, however, are attempting to take a more socially responsible stance. These airports allow passengers to make a donation to various local charities when they empty their pockets at security checkpoints, rather than just dumping their change into the provided plastic tubs or cups. Change is collected for charity at airport security in Phoenix, Arizona, Columbus, Ohio, and Denver, Colorado. More airports may follow suit in the future. 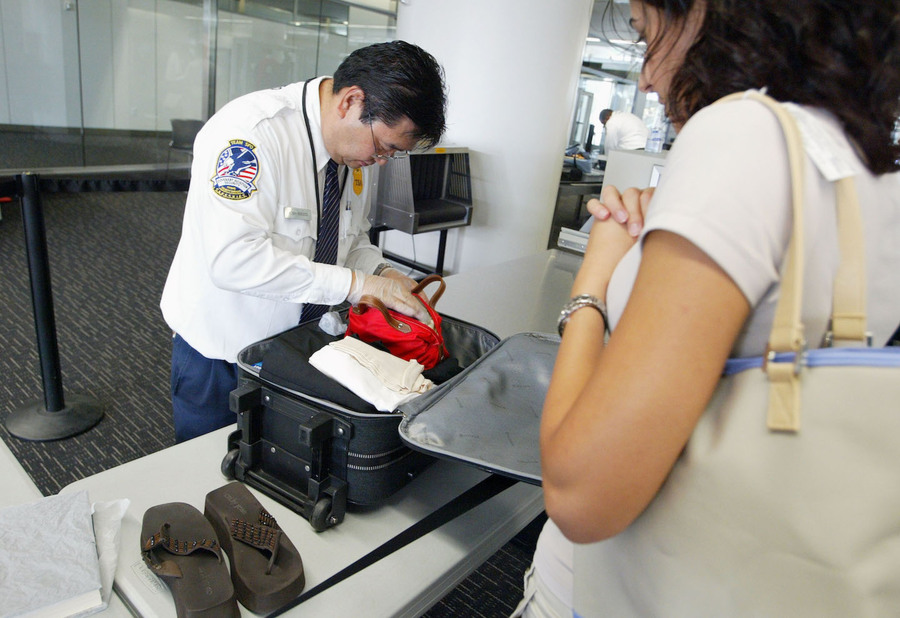 What about items other than change that people leave behind or have confiscated? Every year the TSA builds up an unbelievable collection of random items including knives, belts, phone chargers, power tools, snow globes, baseball bats, sunglasses, coats, jewelry, and even guns! Some of these confiscated and forgotten items end up at one of many state-run surplus stores usually located not far from the airport. Belts sell for $5. Corkscrews and nail clippers sell for 10 cents. Scissors sell for $3. Knives are sometimes sold by the pound! The TSA also ends up putting many items up for sale on sites like GovDeals.com and eBay. In July 2012, three pounds of assorted "gold-toned" jewelry sold for $6,885.

All confiscated liquid and gels are thrown out. Guns are transferred to local law enforcement agencies to be destroyed. And if you don't think anyone would ever be dumb enough to bring a gun to an airport, it happened 2,212 times in 2014. That's an average of six guns found EVERY DAY! The all-time record for guns found in one day happened on June 4, 2014, when 18 guns were found in carry-on bags around the country. Of the 2,212 total guns found, 83% were loaded. Not surprisingly, the airport with the most gun seizures in 2014 was Dallas Fort Worth. In May 2014, a live hand grenade was found in a carry-on bag at LAX. My personal favorite happened in March 2014, when an idiot traveling through Kansas City (MCI) attempted to get on a plane with a novelty alarm clock that was shaped like an old-timey dynamite bomb packed in his bag:

Selling lost and confiscated items is not a big business. Last year the state of Alabama reportedly earned $20,000 off sales after expenses. California took in only around $13,000 after expenses. On the other hand, a TSA store in Texas earned over $400,000 in 2012. All money generated by sales of items is transferred to the state's treasury.

With the millions of people who travel each year, loose change collection at airport security has become a strange cottage industry all its own. There is no information regarding what the TSA plans to do with the half million dollars that is left all around the nation each year. Wouldn't it be great if they used it to figure out a way to make the entire security checkpoint process more efficient?