How Much Money Did Bill Bowerman Make Off Nike?

Today, you'd be hard pressed to find a single person on the entire planet who isn't familiar with the global athletic apparel juggernaut Nike. And most of us probably know that Nike was the brainchild of a former college professor turned entrepreneur named Phil Knight. But I'd bet that many of us forgot that Phil actually had a co-founder on his way to fame and fortune. That co-founder was Phil's former University of Oregon running coach Bill Bowerman. Bowerman's life story is truly amazing. After all, how many humble state college track coaches inadvertently end up creating one of the most valuable and recognized brands in the world? And how much money did that earn for Bill?

William Jay Bowerman was born on February 11, 1911 in Portland, Oregon. His father, Jay Bowerman, was a former State Senator and interim Governor of Oregon. After his parents divorced in 1913 due to a scandalous affair, the family moved to his mother's hometown of Fossil, Oregon. Bowerman attended elementary school in Medford, Oregon and Seattle. He returned to Medford for high school where he was a member of the band, a football player, and a competitor on the Oregon State Champion track and field team during his junior and senior years.

"If you have a body, you are an athlete." – Bill Bowerman

"The real purpose of running isn't to win a race; it's to test the limits of the human heart."  – Bill Bowerman

In 1929, Bowerman enrolled at the University of Oregon to study journalism and play basketball and football. In his final two years of college he joined the track and field team as a quarter miler. After college, he spent 14 years as a teacher, journalist, and part-time high school football and track coach. He began his coaching in Portland and then became the head football and track and field coach at Medford. He continued to coach at the high school level until 1948, only taking a break from that while he served in the Army during World War II.

In 1948, the University of Oregon hired him to coach the Ducks' track and field and cross country teams. Bowerman spent 24 years in that position at the U of O. Over that time, his "Track Men of Oregon" won 24 NCAA individual titles, four NCAA team titles (1962, 1964, 1965, and 1970), and posted 16 top-10 NCAA finishes. His teams featured 31 Olympians, 38 conference champions, 51 All-Americans, 16 sub-4 minute milers, as well as athletes who achieved 13 world records and 23 American records. During his 24 years as coach at the University of Oregon his team had a winning season every season but one.

Everything you need is already inside." – Bill Bowerman 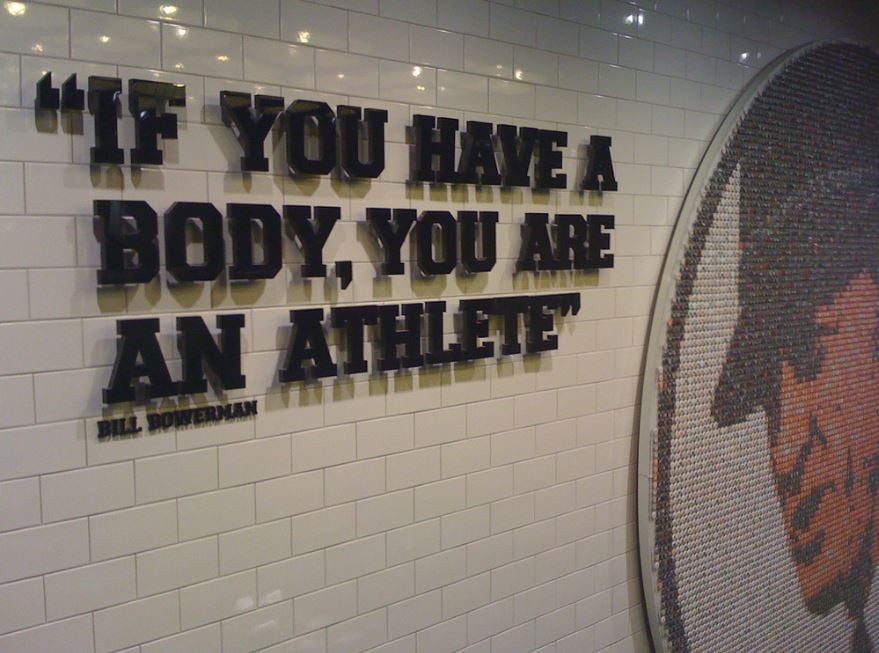 For the 1968 Olympic Games in Mexico City, Bowerman created a training program for athletes to adjust to the high altitudes at the Olympic venues. The success of this program led to Bowerman being named the head coach for the 1972 Munich Olympic track and field events. In this capacity, Bowerman coached members of teams from the U.S., Canada, Australia, and Norway. At the 1972 Olympics, Bowerman also played a pivotal role in the safety of several athletes. Israeli Olympic race walker Shaul Ladnay escaped the PLO terrorists during the Munich Massacre, alerted the German police, and then woke up Bowerman, who called the U.S. Marines to come in and protect Jewish American Olympians including legendary swimmer Mark Spitz.

He Brought Jogging To The U.S.

Bowerman is also largely credited with creating the running boom that has flourished in the U.S. since the 1970s. It was during a 1962 trip to New Zealand that Bowerman was introduced to jogging as a means for older people to stay fit. Everywhere he looked, men and women were running through the streets. He brought the concept back to the U.S., and he himself began running again. Each week, he ran farther and farther, and despite his experience in the sport, found himself like so many others who take up running—amazed he was able to run so far simply by doing it regularly. He was 50-years-old.

He began writing articles and books about jogging and started a running club in Eugene for adult athletes. A new crop of athletic older people took up running as a result, leading to the creation of the masters athlete division in road races. Bowerman was a man with a vision. He wasn't just a coach of students–he inspired and coached people of all ages. Bowerman coached a ton of athletes in his 24 years at Oregon, but his most famous were Steve Prefontaine and Phil Knight.

Bowerman met Knight in 1957 when he was a runner under under his tutelage at Oregon.  In 1964, Bowerman invested $500 in a handshake deal with Phil to create a running shoe company. Officially, Bowerman and Knight co-founded "Blue Ribbon Sports," on January 25, 1964. The company earned $8,000 in its first year selling a re-branded shoe made in Japan. In 1965, the company's sales had reached $20,000. In 1966, Blue Ribbon Sports opened its first retail store, located at 3107 Pico Boulevard in Santa Monica, so its employees no longer needed to sell inventory from the back of their cars.

Bowerman became Nike's first Director of Research and Development. He designed the company's still popular Nike Cortez running shoe in 1968. Bowerman developed a number of shoes for Nike, but is probably best known in that arena for ruining his wife's waffle iron in the early 1970s while experimenting with the idea of waffle-ironed rubber to create a sole that was both lightweight and would have more traction.

As a coach, Bowerman was known for his obsession with better running shoes. He was convinced that if he could reduce the weight of his runners' shoes, they would turn in faster times. He also believed that custom-made shoes would cut down on blisters and reduce the overall drag on their energy for every ounce he could remove from the shoe. There was a lot of math involved in this effort. By Bowerman's calculation, removing one ounce from a shoe of a 6-foot tall runner would translate to a reduction of 55 pounds of lift (of their feet and legs) over a one-mile span. This is significant, and the idea was revolutionary at the time.

Bowerman's waffle-iron inspiration led to the introduction of the Nike "Moon Shoe" in 1972. The waffle tread was said to resemble the footprints astronauts left on the moon. Nike continued to expand, and sales hit $3 million in 1973. The next generation of the "Moon Shoe," which was called the "Waffle Trainer," debuted in 1974 and is credited with fueling the explosive growth of Nike. By 1979, Nike was the leading athletic shoe manufacturer in the United States, controlling half of the quickly expanding market. The company then introduced clothing to its product line, including a variety of shorts, running pants, and shirts. Soon they'd sponsor athletes like Michael Jordan and Tiger Woods. The rest is history, and money in the bank for Bowerman and Knight.

Sadly, while Bowerman was experimenting with shoe design in the early 1970s, he worked in a small, unventilated space using glues and solvents with toxic ingredients. This caused nerve damage to his lower legs. Bowerman was no longer able to run at all, let alone in the shoes he'd given the world.

Show Me The Money!

So how much money did Bill eventually earn off the enormous success of Nike? Bowerman's original $500 investment had been converted into approximately 27.8 million shares. On the day Nike went public in 1980, those shares were worth $9 million. That's worth the same as roughly $25 million today, after adjusting for inflation.

When Bill passed away on December 24, 1999 at the age of 88, his shares were worth $300 million (roughly $420 million after adjusting for inflation). If Bill had managed to be alive today, he would be 104-years-old, and his Nike stock (assuming he never sold a share) would be worth around $2 billion. That's a hell of a gain on a $500 investment! And in case you're curious, Phil Knight is worth $29 billion today.

Just do it, indeed!

Bowerman was survived by his wife Barbara and three sons.