How Much Money Did Barack Obama Make In 2014? Latest Tax Return Released!

By Brian Warner on April 11, 2015 in Articles › Entertainment

Every year, both the President and Vice President are required by law to release their full tax returns to the public. The White House releases PDFs of the actual tax return documents that are submitted to the IRS. We're able to see exactly how much they each earned in gross income, how much was paid in taxes, how much was donated to charity… etc.

Interestingly, despite the fact that the stock market is hitting record highs, and the American economy in general is kicking butt, Barack Obama earned less money last year than he has in a decade. What happened??? 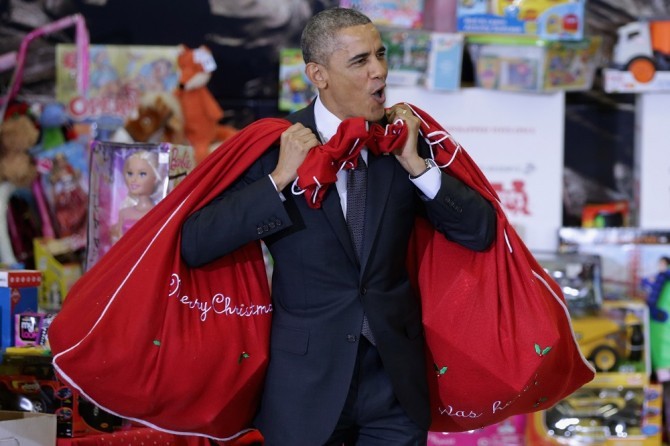 How was their tax rate so low??? Well, it helped that they donated 15% of their income, $70,712, to 33 different nonprofit charities. The largest donation, $22,012, went to the Fisher House Foundation, which is an organization that operates a network of "comfort homes," which are used by families at no cost, while a loved on is receiving medical treatment. The Obamas also donated $5,000 to Sidwell Friends, the DC private school where their daughters attend. Barack and Michelle gave $1,500 to a local Episcopal church and $200 to the ALS foundation after he declined to participate in last year's Ice Bucket Challenge.

As we mentioned in the first paragraph, $477,383 is the lowest amount of money Barack has earned in a decade. To give you some perspective, here's Barack's income history dating back to 2000:

Why has his income dropped so drastically since 2007-ish? Apparently no one is buying his books anymore!

The vast majority of Barack's net worth has been generated by book royalties. Of the $20 million he has earned in since 2000, roughly $15 million has come from royalties.

Barack's wallet began to seriously expand for the first time in his life after his much praised keynote speech at the 2004 Democratic National Convention. As Obama's profile rose, so did sales of his 1995 book "Dreams from My Father: A Story of Race and Inheritance." Barack's second book "Audacity of Hope," released in October 2006, was a massive hit, selling millions of copies and rocketing his income to $4.2 million in 2007. Royalties continued to pour in over the following years thanks to Barack's  successful campaign and election.

To this day, Barack Obama earns $3.75 for every hardcover copy and $1.12 for every paperback he sells. As a sitting President, Obama is not allowed to release any for-profit endeavors, but when his second term ends in 2016, you can be sure every major publishing company in the world will be clamoring to release his official autobiography. George W. Bush received a $7 million advance for his memoir "Decision Points" and Bill Clinton received a record setting $15 million for "My Life." Interestingly, despite receiving more than double the advance and having an arguably more salacious story to tell, Clinton actually sold fewer books than Bush. Barack should receive at least $10 million for the rights to his autobiography.

According to another legally required disclosure, Obama currently estimates his net worth to be around $12 million. That number will start to skyrocket once his second term is up and he's free to cash in. Keep in mind that when the Clintons left office, they were essentially broke on paper. In the years that have passed since Bill left office, he alone has earned over $100 million from book advances, and more lucratively, speaking engagement fees. Do you think Barack will be as popular a public speaker as Bill has been? Will he be making $100 million in the next decade?