How Much Did The Seinfeld Cast Members Make Off The Show?

By Amy Lamare on September 19, 2019 in Articles › Entertainment

It isn't farfetched to say that Seinfeld – the show about nothing – is the last best pop culture phenomenon to come out of the 20th century. Friends may come close – in both its cultural impact and how it made its cast famous and wealthy – but Seinfeld still reigns supreme. That got us thinking: How much did the Seinfeld cast members make off the show? It ran for nine seasons and by that last season Jerry Seinfeld was making $1 million per episode, while Julia Louis-Dreyfus, Jason Alexander, and Michael Richards were making about $600,000 per episode. In fact, Seinfeld's $1 million per episode was a record until 2002, when the cast members of Friends all banded together to push for – and get – $1 million an episode.

Reportedly, Jerry Seinfeld turned down more than $100 million – or $5 million per episode – to do just one more season of his sitcom. He didn't need to. Even today, Jerry Seinfeld would never have to perform another stand up set, ride around in cars with other comics getting coffee, or develop another television show as long as he lives and he'd still make millions each and every year. THAT is the staying power of his eponymous creation Seinfeld.

Let's take a look at how much each cast member made off Seinfeld. 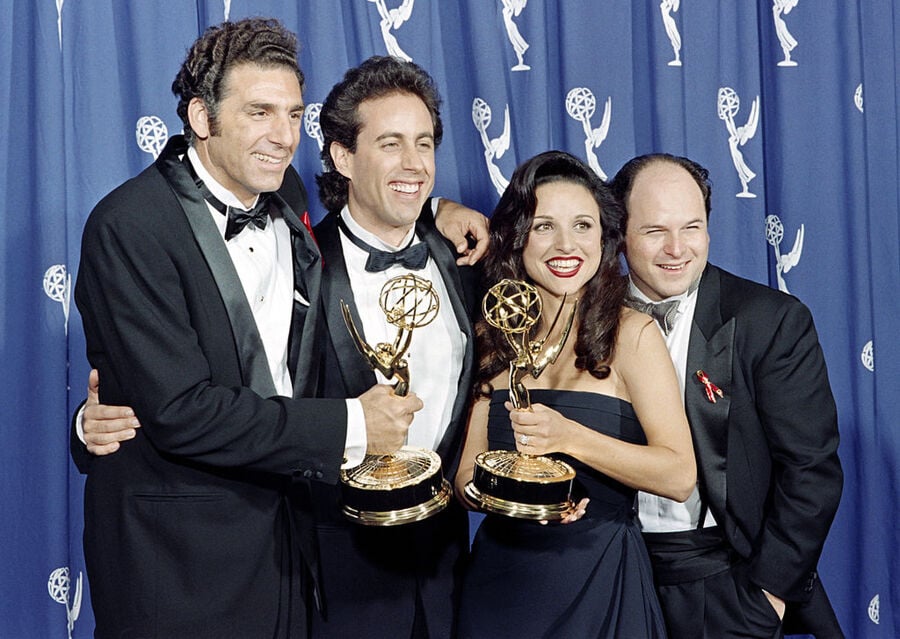 In 1989, Jerry Seinfeld and Larry David got together to create a pilot for NBC called The Seinfeld Chronicles. It was obviously renamed Seinfeld and ran for nine seasons and 180 episodes. It is one of the most successful shows in syndication history as well, generating more than $4 billion to-date.

When you add it all up, Jerry earned roughly $60 million in salary alone from "Seinfeld". Roughly the same as around $100 million after adjusting for inflation.

For the first several seasons of Seinfeld, supporting cast members Julia Louis-Dreyfus, Jason Alexander, and Michael Richards earned a nominal amount of money for their work on the show. They successfully negotiated raises before season 5, in 1993, that had them each earning $150,000 per episode, roughly $3.8 million per season. In May 1997, the supporting cast members held out for a massive raise, hoping for $1 million per episode and/or backend ownership points. As Jason later explained:

"Julia, Michael and I, during our big renegotiation for the final year, asked for something that I will go to my grave saying we should have had, and that is back-end participation in the profits for the show. It was categorically denied to us, which forced us to then ask for ungodly salaries. We make very little, standard Screen Actors Guild residuals for the reruns."

Jason explained to Jerry at the time:

"The day will come when you regret this decision, only because it's going to put us in a position eventually of seemingly tainting the wonderful impression of what this was for the four of us. You have created a rift between you and the three of us, and while we are in no way, shape or form looking for parity with you, you have created a chasm that is also inappropriate."

Contrary to popular belief, Julia, Jason, and Michael do not make significant amounts of money from Seinfeld's syndication deals. In order to make money from syndication sales, one needs to have equity ownership percentage points on the show. The supporting cast never received backend points on the show. They do receive royalties from when the show airs, but these payments equate to hundreds of thousands per year at most, not millions as many assume. By contrast, Larry David and Jerry Seinfeld each earned $250 million in 1998 alone from syndication sales. Even a full decade later, Larry and Jerry were earning at least $50 million per year from syndication points. While the supporting cast members were denied backend points in 1997, they were able to negotiate profit-sharing points on the DVD sales which resulted in a moderate windfall back when people bought DVDs.

By contrast, from the outset of Seinfeld, Jerry and Larry David each owned 7.5% of the show's backend equity points. At the peak of the show's success when Jerry and Larry were negotiating new deals with NBC, they were able to double their ownership stake to 15% each. When the show was first sold into syndication in 1998, it generated $1.7 billion in revenue. That left both Jerry and Larry with $255 million windfalls.

When Seinfeld sold to Hulu for $180 million in 2015, Jerry and Larry each earned $27 million. In a given year, they earn $40-50 million from syndication sales and show royalties.

As of this writing, Jerry and Larry have both earned at least $800 million off Seinfeld between salary, DVD, merchandise and syndication deals.

By the time Friends came along in 1994, things had changed a bit. And it was different from Seinfeld in that none of the six stars were more famous than the others, and from the outset, they were all paid the same. During the first season, each of them earned $22,500 per episode. That works out to $540,000 for the first season. Their salaries were boosted to $40,000 per episode in the second season. That works out to $960,000 for the second season.

Before season 7  started filming, the cast negotiated for a massive raise. They each ended up earning $750,000 per episode in seasons 7 and 8 ($18 million per season). For seasons 9 and 10, each cast member earned $1 million per episode. That works out to $24 million for season 9 and $18 million for season 10. If you total it all up, each cast member of Friends earned around $90 million in base salary alone from the show before backend bonuses and on-going royalties.

As part of their 2000 contract negotiations, the cast was able to demand backend points on the show which would allow them to earn royalties off the show's sale into syndication. Up to that point, the only other TV stars who had ownership stakes in shows were Jerry Seinfeld and Bill Cosby – and their show titles had their names in it. Friends continues to generate north of $1 billion per year in syndication royalties and streaming deals. It has been reported that each cast member in some years can earn $10-$20 million in royalties alone.

In the end, the cast of Friends makes more in syndication than the supporting cast members of Seinfeld, which harkens back to Jason Alexander's statement about the chasm between Jerry Seinfeld and the rest of the cast. With Friends, it has always been equal.