How Master P Flipped A $10,000 Life Insurance Settlement Into A $250 Million Business Empire

By Brian Warner on February 19, 2022 in Articles › Entertainment

When you browse our annual ranking of the richest rappers in the world, many of the top names are probably easy to guess. You've got your standards… Dr. Dre, Kanye West, Diddy and Jay-Z. And then you may be surprised to who comes in at #8.

The eighth richest rapper in the world today hasn't had a major hit in over a decade. In fact, his once dominant rap label filed for bankruptcy back in 2003 and his most recent self released studio album sold just 75,000 copies. In case you haven't figured it out yet, we are talking about the ultimate No Limit soldier, Percy Miller. Better known as Master P.

It might be hard to fathom today, but back in the mid-to-late 90s no other rap label or CEO was more successful than Master P and No Limit Records. Master P pulled himself out of one of the roughest and poorest ghettos in New Orleans by launching a hugely successful business empire that earned him hundreds of millions of dollars. And it all started with a $10,000 life insurance settlement check.

Master P was raised in the Calliope housing projects, one of the most violent and drug infested areas of New Orleans. P planned to get his family out of the ghetto by playing in the NBA. After high school, he won a basketball scholarship to the University of Houston. Unfortunately P's NBA dreams were dashed after he suffered a severe knee injury during the first few months of freshman year.

After the injury, Master P left Houston and transferred to Merritt Junior College in Oakland to be closer to his family which had recently moved to the nearby city of Richmond. Determined to make something of himself and help his family live a better life, he soaked up as many business classes as he could at Merritt. In 1990, tragedy struck when P's grandfather was killed in a work related accident. The one bright side of the accident was that it left Percy with a $10,000 malpractice insurance settlement check. 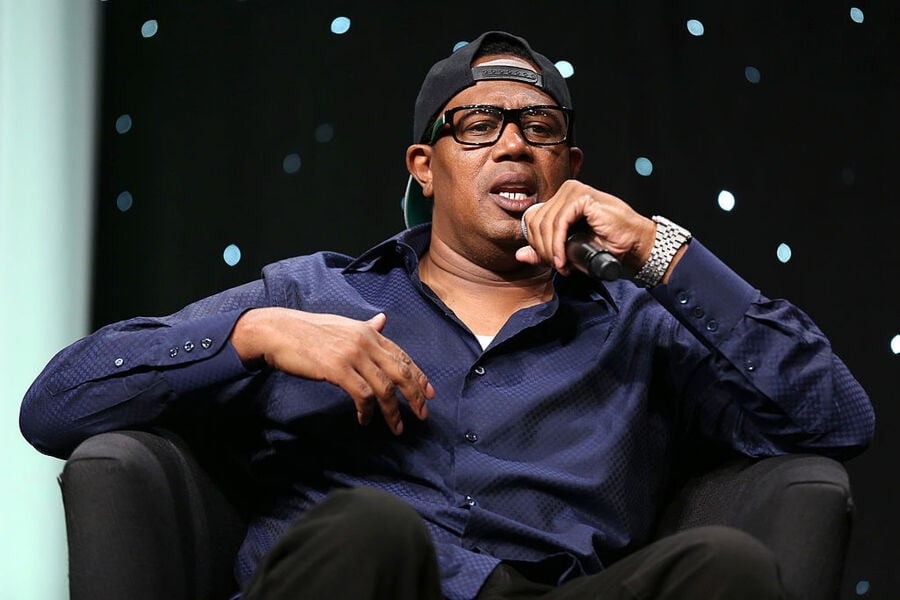 Armed with $10,000 and two years worth of junior college business classes, Master P decided to open a record store. He found a dilapidated building and struck a deal with the owner that gave him the first three months rent free in exchange for cleaning and renovating the storefront. The 21 year old future mogul soon launched "No Limit Records & Tapes" on San Pablo Avenue in Richmond, California. To reduce costs in those early days, Master P lived in a tiny storage room in the back of the shop with his wife Sonya and their one year old son, Percy Romeo Miller, Jr (AKA the future Lil Romeo).

No Limit Records & Tapes mainly sold West Coast gangster rap albums with an emphasis on local East Bay artists like Tupac, Too Short, Rappin 4 Tay and E-40. Within a few months, the store was a hit in the community and in 1991 Master P began selling his own self produced album "Get Away Clean" through the newly launched "No Limit Records" label. To support the album, Master P set out on a West Coast tour as the opening act for Tupac and Too Short. Along the way, P connected with as many promoters and DJs that he could find. In 1992, after Master P's second album "Mama's Bad Boy" sold more than 150,000 album independently, he decided to move No Limit Records back to New Orleans in order to make a real run at the label business. By 1994, his third album "The Ghettos Tryin to Kill Me!" sold an unheard of 250,000 units independently and No Limit Records grossed more than $900,000!

Pretty soon, all the major record companies came calling. Leveraging his astonishing success as an independent artist, Master P was able to secure an unprecedented deal between No Limit and Priority Records. Not only would No Limit receive a $375,000 advance for every album produced and 75% of the wholesale price for every album sold (the standard at the time for a major artist like Madonna was 25-50%), but at the end of the deal Master P would own every master recording from his entire roster of artists, including himself.

Considering how successful he was as an independent artist without money, marketing or national distribution, perhaps what happened next is not surprising. Master P's first album for Priority Records "Ice Cream Man" reached #3 on the Billboard charts in 1996 and would eventually go platinum with over 1.7 million copies sold in The US alone. No Limit quickly churned out albums for roster artists like Silkk The Shocker and C-Murder (P's brothers), Mystikal, Mia X and Steady Mobb'n. By 1997, No Limit had produced more than 8 platinum albums. Between 1997 and 1998, No Limit released nearly 50 albums that often topped various Billboard sales charts. Master P's 1997 album "Ghetto D", which featured his most famous song "Make Em' Say Uhh", sold 3.2 million copies in The US. The single for "Make Em' Say Uhh" sold over a million copies.

The Peak Of Success

Without question, 1998 was the peak year for Master P and No Limit Records. That year saw the release of Master P's penultimate album "MP Da Last Don". That album debuted at #1 on Billboard's Top 200 Chart and sold a whopping 500,000 copies in its first week alone. The album would eventually go on to sell more than four million units. Capitalizing on their success, No Limit signed super star rapper Snoop Dogg whose deal with Death Row had recently expired. Snoop's first No Limit album "Da Game Is to Be Sold, Not to Be Told" debuted at #1 on Billboard, sold 800,000 units in its first two weeks and would eventually be certified 2X platinum. Thanks to Snoop and the other hit making artists at No Limit, Master P's label sold more than 20 million albums in 1998 alone.

As if this wasn't enough, while No Limit was tearing up the Billboard charts, Master P was expanding his empire into a diverse array of side businesses. He launched a sports management company, a clothing line, a real estate firm, a phone sex business, a high end travel agency, a video game company and a film studio. No Limit Films produced a series of straight to VHS movies that routinely sold millions of copies. Between 1992 and 1998, No Limit Records sold $120 million worth of albums and in 1998 alone Master P's various business ventures generated revenues of more than $160 million. As of March 2013, No Limit Records has sold nearly 80 million albums worldwide and Master P has a personal net worth of $250 million!

No matter how much talent or luck No Limit had, it would have been extremely difficult to top the success of 1998. Between 1999 and 2002 Master P focused much of his time on trying to jump start an NBA career. He actually landed contracts with the Charlotte Hornets and the Toronto Raptors. He never made a regular season NBA roster but he did play a few seasons in the Continental and American Basketball Associations. While he was shooting hoops, No Limit did release a few more platinum albums including two from Snoop Dogg and two from his son Lil Romeo. Unfortunately, as Master P's focus shifted to basketball, America's taste in music shifted away from No Limit. Their most popular artists left for new labels and by December 2003 No Limit filed for bankruptcy. In 2004 Master P launched "New No Limit Records" and released a self produced album called "Living Legend: Certified D-Boy" which only sold 75,000 units. In 2010 the label was renamed "No Limit Forever Records" and today they represent a handful of lower and mid-level rap acts. But don't count Master P out just yet, as he proved time and again, with a little hustle and luck there really is no limit to your success.