How Bill And Hillary Clinton Embraced Wall Street And Made $76,000 PER DAY

By Amy Lamare on March 6, 2016 in Articles › Entertainment

Hillary Clinton indicated in her concession speech in New Hampshire that she wanted to get the "secret unaccountable money out of politics." She also said: 'Wall Street can never be allowed to once again threaten Main Street. And I will fight to rein in Wall Street—and you know what? I know how to do it." Sounds, good right? Hillary Clinton DOES know how to do it. After all, she was First Lady for eight years, a U.S. Senator from New York for eight years, and the U.S. Secretary of State for four years. There is no doubt that Hillary knows the ins and outs of the politics of the West Wing, you don't have to like her to acknowledge she is prepared for the job.

However, Hillary and former President Bill Clinton have been cashing in on large paydays fueled by Wall Street firms since at least 1999 and that makes believing her liberal stances on issues a little trickier. All together, the sum the couple has made from speaking engagements over roughly the past 15 years comes out to $153 million.

At times, organizations including the American Camping Association and the American Society of Travel Agents paid Hillary made more than $200K per speech. Hillary's power to earn big bucks with her speeches is so good that she earned $100,000 for a speech even though she wasn't actually present in the room to give it. She phoned one in via a satellite link. 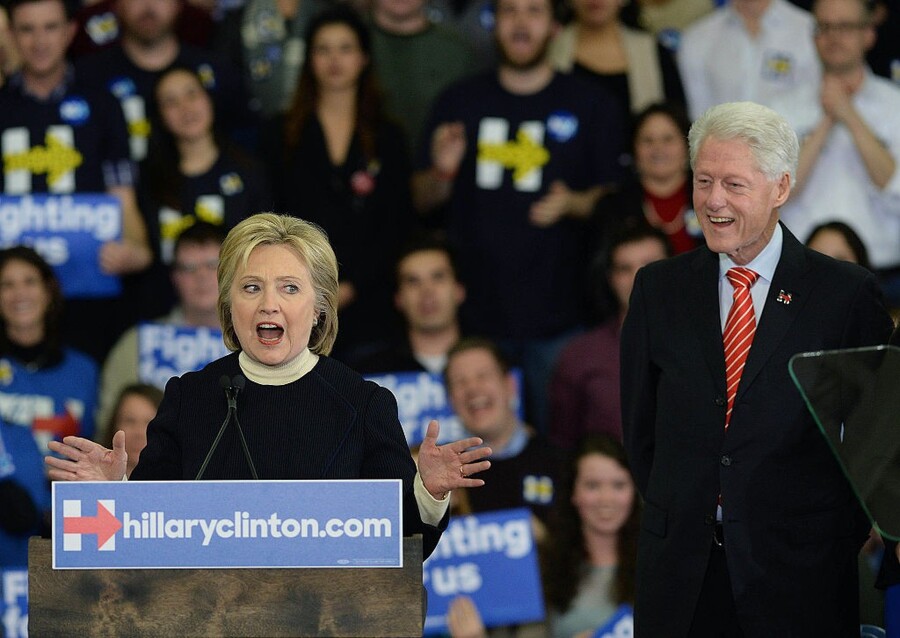 Clinton is under pressure from fellow Democratic presidential candidate Bernie Sanders to release transcripts of the speeches she's given to Wall Street firms. Sanders claims that the Clintons are too close to bankers for comfort. Additionally, reports have been making the rounds that suggest Hillary's speeches could be damaging to her campaign. It has been said that when giving the speeches Mrs. Clinton sounds like a managing director at Goldman Sachs.

Of course she sounds like a financial industry guru, she's an adult woman who has helped manage her family fortune for decades.  Of course, political rivals like to demonize their competitors. Critics of Hillary's claim that she is too close to the financial establishment and that her high net worth of $45 million means she cannot relate to normal Americans. Well, that is just silly, as every single candidate for President of the United States has achieved a measure of success and wealth that is above average or they wouldn't be seeking the highest office in our country. If Hillary's net worth of $45 million means she's out of touch with the people, then what does that say about Donald Trump and potential candidate Michael Bloomberg? Both men are billionaires.

Nonetheless, Hillary's ties to big banking establish her as part of the old guard and her disastrous defeat in New Hampshire means Clinton needs to retool her campaign and approach if she hopes to beat Bernie in the primary. Heck, she is going to have her hands full with the Nevada and South Carolina caucuses on her way to the primary. In order to do so, Hillary will likely have to come clean about the enormous amount of money she has made from the financial industry.

Looking at the Clintons' tax returns and campaign finance disclosures reveals that Hillary's relationship with Wall Street goes back at least 17 years to when she was running for Senator in 1999. During Hillary's time as Senator until she resigned to take the Secretary of State post in 2009, her top donor gave her $842,402. That donor was Citigroup. The second largest donor was Goldman Sachs with $760,740 followed by law firm DLA Piper with $700,530. JP Morgan gave Clinton $696,456 and Morgan Stanley donated $636,564.

Even while Hillary was in office, she brought in hundreds of thousands of dollars from giving speeches. This practice is legal, although it does bring up concerns over conflicts of interest. From 2001 forward, Hillary made $1.8 million from eight speeches to Wall Street banks, traveling across the United States to talk to the wealthiest people in the country.

She gave three speeches to Goldman Sachs in 2013 in Palmetto Bluffs, South Carolina, New York City, and Tucson, Arizona. Two were within days of each other in October. She made a combined total of $675,000. She gave three speeches in 2013 for which she netted $225,000 each. Those speeches were made to UBS in New York City, Morgan Stanley in Washington, D.C., and Bank of America in Bluffton, South Carolina. She also gave two speeches to Deutsche Bank for a total of $485,000 in 2013 in New York City and Washington, D.C.

Some of her speeches have already proven to be both controversial and a conflict of interest without the transcripts being available to read. In 2009, shortly after taking office as Secretary of State, she got involved in the investigation of UBS when the IRS was suing to obtain names of Americans who had accounts in its secretive Swiss division. This was a very unusual move for a Secretary of State and it led to UBS making a deal to hand over data on just 4,450 accounts. The IRS had been seeking data from 52,000 Swiss bank accounts. After this incident, UBS booked Hillary for a speech and increased its donations to her charitable initiative, the Clinton Foundation, from $60,000 in 2008 to $600,000 by the end of 2014.