How A $10 Fashion Blog Became An $8 Million Fashion Empire

When blogging first started to become popular, most people used it for chronicling their day, or writing about a cause, television show, or activity about which they were passionate. However, it quickly became clear that blogs could do more than share information. They could inadvertently turn you into an online star. Take for example the story of Chiara Ferragni, a twenty-something blogger who went from total unknown, to highly sought after fashionista in just six years. In fact, her blog is now worth an estimated $8 million. While her story isn't exactly a true "rags to riches" tale, it is pretty darn close, and it gives hope to anyone who has ever wanted to harness the power of the Internet.

Chiara Ferragni was born in Cremona, Italy on May 7, 1987. She was always interested in fashion and photography, a passion she shared with her mother. As a teenager, she began posting photographs of her favorite looks online for her friends to see. Her eclectic, aesthetic sensibility and personal style began to attract fans beyond her social circle. While majoring in law at Bocconi University, one of Italy's most prestigious schools, she launched her own fashion blog, paying just $10 to set it up. The blog, called "The Blonde Salad," became an almost instant hit. According to Ferragni, the blog was only meant to "create something that people loved to look at, and they could find inspiration from, and that was it." By 2011, however, it had become a darling of the fashion world.

She was subsequently dubbed, "One of the biggest breakout street-style stars of the year." by New York Magazine. Over the course of two years, her blog had grown from a few hundred views per month to 1 million unique visitors, and 12 million impressions per month. The popularity of her blog, and its unique focus on personal fashion, began to attract the attention of fashion brands and designers. Then Teen Vogue interviewed her about her success, and showed off some of her fashion designs, and by 2013, she had become a fashion force to be reckoned with. In addition to winning numerous blog-related awards, she was again featured in Teen Vogue, published her first fashion eBook in Italian, appeared as a model in an ad campaign for Guess, launched her own line of shoes in partnership with Steve Madden, and collaborated on various designs with such fashion heavy-hitters as Christian Dior, Seven for All Mankind, J Brand, Max Mara, Chanel, Tommy Hilfiger, and Louis Vuitton, to name just a few. 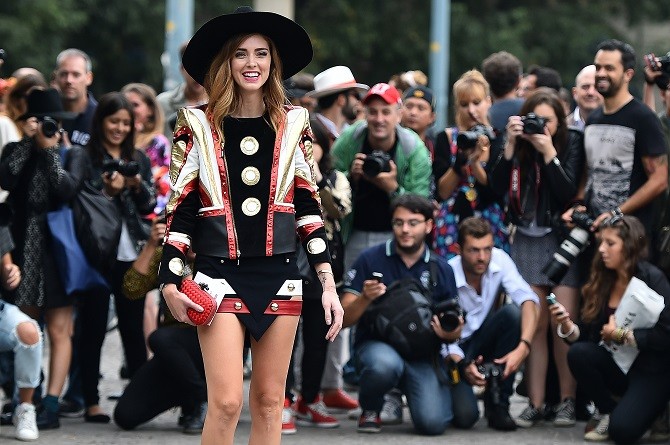 Her work, as both a designer and an online trendsetter, has turned into its own fashion empire. Her shoe line, aptly named The Chiara Ferragni Collection, earned $5 million last year. Her blog, "The Blonde Salad," is now a lifestyle website, that pulls in $1.5 million in advertising and referral sales annually. She serves as Editor-in-Chief, while her former boyfriend, the co-founder of the blog, serves as CEO. When she is not overseeing her team of 16 writers and designers, she travels around the world speaking about fashion and hosting fashion events. She makes as much as $50,000 per appearance. She has a standing invitation to all the major runway shows around the world, and designers send her clothing, shoes, and jewelry as gifts or on loan, in the hope that she will feature them on her blog. She has also appeared on various television shows, including serving as a presenter at the Italian TRL Awards and guest judging on "Project Runway" in 2014. She became the first fashion blogger to ever appear on the cover of any issue of Vogue, when she was chosen to appear on the cover of Vogue Espana's April 2015 issue.

"The Blonde Salad" has 3.4 million followers on Instagram and her posts receive as many as 130,000 "likes" each month. She has almost as many followers as Oprah. Her blog now receives 500,000 unique visitors per month, and fashion labels are all but begging her to introduce their lines to her massive subscriber base. She has a loyal following, largely because she has remained consistent with her content and style choices from the beginning, and because she seems to be picky about which brands with which she'll align herself. She knows what she likes. More than anything, her blog is an unapologetic reflection of her own taste. Fortunately, her personal style is one that many people seem to want to emulate.

She has been so successful with regard to marketing and building a monetized online presence, that she has become the focus of an extensive ongoing study by Harvard Business School. She has won the Bloglovin' Award for Best Personal Style Blog three years in a row. Later this year, she will be awarded "Beauty Icon of the Year" by Marie Claire Magazine in a ceremony in Mexico City. That's not too shabby for a 27-year-old. What began as a $10 site for sharing cute clothes with friends, is now worth $8 million. While Chiara Ferragni has plans to finish her law degree at some point, right now, she is busy taking the fashion world by storm simply by being herself. If that's not a cool way to make a living, it's tough to know what is.