By Amy Lamare on December 15, 2014 in Articles › Entertainment

When Katrina "Kat" Cole was a high school student in Jacksonville, Florida she took a part time job slinging beer and chicken wings that, unbeknownst to her at the time, would set her on a course for the boardrooms of a billion dollar restaurant franchise. What was that job? Cole was a Hooters waitress. Yup, she strapped on the tight tank top and signature orange shorts every day. Today Kat, who is just 35 years old, controls Cinnabon, a global billion dollar brand. How did she go from hot wings to hot buns all before her 35th birthday? Let's find out…

Kat Cole was born on March 18, 1978 in Oceanway, Florida. She grew up in Orange Park, a suburb of Jacksonville, with her two younger sisters and her parents. When she was nine years old, her mother divorced her alcoholic husband (Cole's father) and set out to raise her three daughters as a single mom. The family of four females spent nearly three years living on a shoestring budget. Their typical grocery budget for the week during this time was just $10, despite her mother working three jobs to support her daughters. Consequently, the moment Cole could get a job, she did. She worked typical mall jobs, selling clothes for a time and then working at The Body Shop before being recruited to be a Hooters hostess. 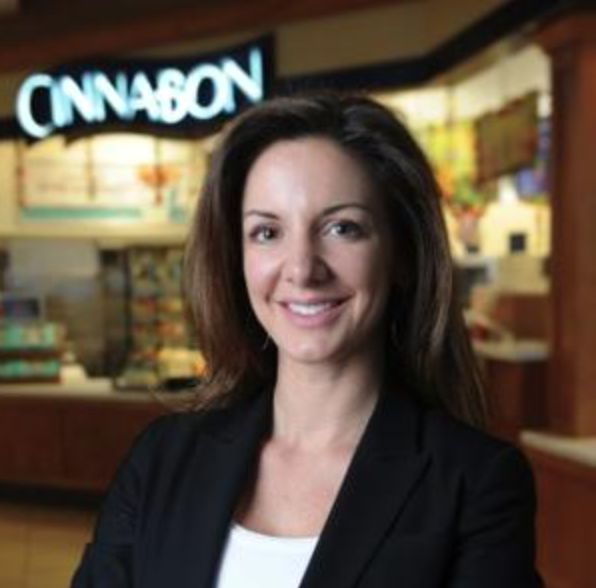 She enrolled at the University of North Florida to study engineering and law, but soon found the opportunities at Hooters—yes Hooters—were better than the prospect of remaining in school. In fact, during her first year at Hooters, Cole got experience in various positions ranging from cook to manager—covering nearly every position at the restaurant. She was elevated from hostess to waitress. When the cook quit, she jumped in and helped out. When the manager was fired, she took the helm, learning how to run a shift in a busy restaurant.

Based on her work ethic, her manager recommended her to as Jacksonville's best employee and she was chosen to go to Sydney, Australia to train the new owners and employees of the first Australian Hooters. She was just 19 years old and it was her first time on an airplane.

Cole was in Sydney for 40 days and was so successful that she was tapped to continue traveling overseas in order to train Hooters employees abroad. Ten days after she returned from Australia she was sent to open the first Hooters in Central America. Then she was sent to Asia, Canada, South America, and Africa. By the time she was 20 years old, Cole had opened the first Hooters restaurants on most of the continents outside of North America. She was so busy with her job that she was failing out of school so she dropped out to focus on Hooters.

When she was 26-years old, Cole was named Vice President of Training and Development for Hooters. She had overseen the growth of the franchise from approximately 100 locations with $300 million in revenue to 500 locations in 33 countries with $1 billion in revenue in 10 years.

In late 2010, when she was 32 years old, she was tapped to be the President and Chief Operations Office of Cinnabon, Inc., a chain of retail bakeries specializing in Cinnamon buns. Their claim to fame is a proprietary type of cinnamon that is gooier than usual. She also got her MBA from Georgia State, although, since she had never graduated from her undergraduate program, she had to take the GMAT, present her resume and accomplishments, get recommendations from corporate big wigs (including Ted Turner) and earn her way into the program in a more unconventional way.

In 2012, Cole worked undercover in a number of Cinnabon retail and production jobs as a part of the television show "Undercover Boss." Cole plans to turn Cinnabon into one of the world's greatest food brands, making Cinnabon as much of a household name as Coke and Oreo and Kleenex.