By Simon Gerard on July 30, 2012 in Articles › Entertainment

Did you know that Holly Madison insured her breasts for $1 million? The Reality TV star took out her policy with Lloyd's of London, known for making headlines by insuring celebrity body parts. Other famous celebrity parts that have been insured by Lloyd's of London include Dolly Parton's breasts, Keith Richard's middle finger, America Ferrara's smile, Bruce Springsteen's voice and Gene Simmons' tongue.

Over the years legs have been a popular body part to insure. Celebrities such as Angie Everhart, Jamie Lee Curtis, Mary Hart, Maria Carey, Heidi Klum, David Beckham and Michael Flatley (star of Lord of The Dance) have all taken out big policies on their legs. Apparently Heidi had her right leg insured for $1.2 million and her left for only $1 million… why we will never know. There was also the rumor of Jennifer Lopez's billion dollar policy on her booty, which she denied. 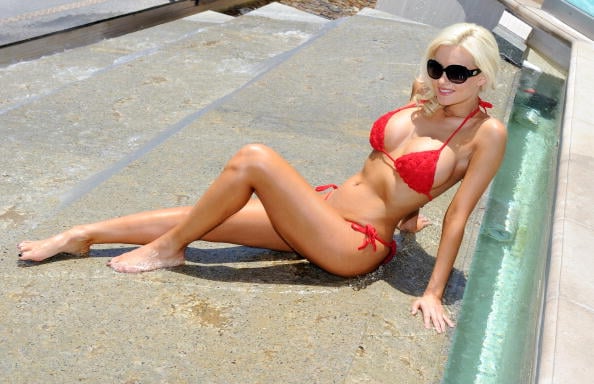 Holly Madison currently works as a showgirl at Planet Hollywood's in Las Vegas. She is also filming a reality show based on her work and life called "Holly's World" for the E! network. As a showgirl and former Playboy Playmate, it's not that crazy to think that her breasts are a very important source of income. If anything happened to them she could lose her reality show and her Vegas gig therefore it's probably worth the premium for her. After all, since breaking up with Hugh Hefner and moving out of the Playboy Mansion Holly has to look after #1 and #2.

Considering that the other celebrity body parts are real and Holly's breasts are fake, isn't this like insuring a fake Picasso painting? Do you think these puppies are worth the insurance or should she just pay in full for a new pair if something bad happened? Is it worth it for the publicity her assets get as a result?….Study the pics and let us know what you think in the comments.