By Amy Lamare on December 10, 2013 in Articles › Entertainment

Despite being one of the wealthiest internet tycoons on the planet, you've probably never heard the name Hiroshi Mikitani. Furthermore, if you surveyed people on the streets of Silicon Valley to see if they've even heard of his company, Rakuten Inc, you'd probably get a lot of blank stares. This is insane because Rakuten Inc is a global e-commerce conglomerate that absolutely dominates online shopping. Hiroshi Mikitani founded the company in 1997. On Black Friday 2013, Rakuten.com Shopping (formerly Buy.com) shattered all previous site records for sales. It's revenues grew 100% growth on Thanksgiving Day and 61% growth on Black Friday compared to the previous years. In 2012, the company's revenues totaled $4.7 billion with operating profits of about US$770 million. The site's 48-year old founder is worth $8 billion which is enough to make him the third richest person in Japan. This is his how the Rakuten empire was built. 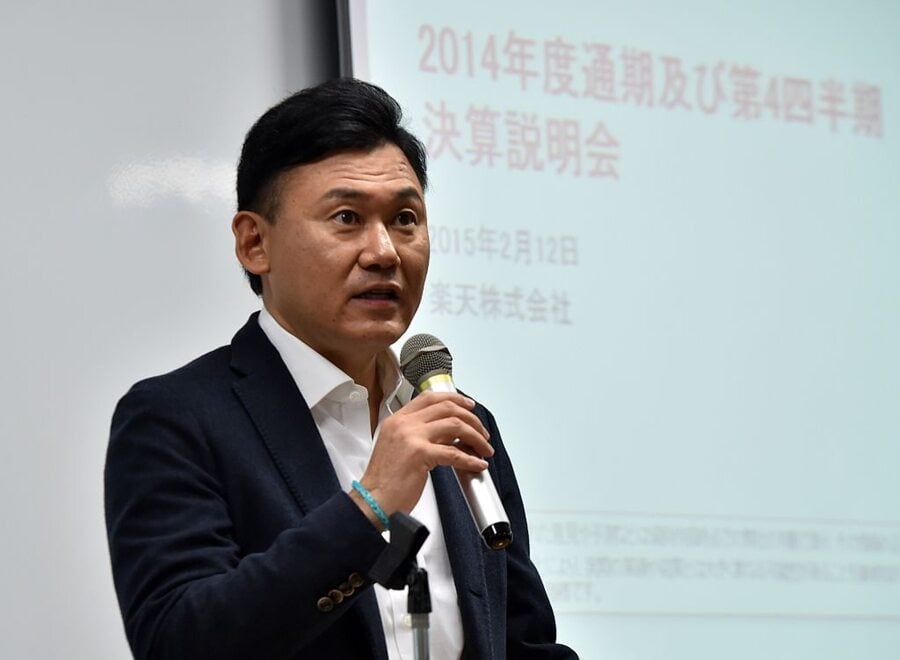 Hiroshi Mikitani was born in Kobe, Japan on March 11, 1965. His father, Ryoichi Mikitani is an economist, Kobe University Professor Emeritus, and Yale University professor. His mother spent part of her early childhood in New York and graduated from Kobe University. She worked for a major trading firm and was one of the first women to do so in Japan. Mikitani has a sister who is a doctor and a brother who is a professor of Biology at the University of Tokyo.

Hiroshi Mikitani attended Hitosubashi University, obtaining a Bachelor's degree in commerce in 1988. While in college, Mikitani was a member of the tennis team and almost went pro. After college, Mikitani joined the Industrial Bank of Japan as an investment banker. In 1993, Mikitani received his MBA from Harvard Business School and returned to Tokyo to continue working for the bank, which had sponsored his MBA program.

On January 17, 1995, one year to the day after the 6.7 Northridge earthquake in Los Angeles, a 6.8 magnitude earthquake hit Mikitani's hometown of Kobe. Among the 6,434 people killed in the quake were members of Mikitani's family and friends including an aunt, uncle and several friends. This brush with mortality led Mikitani to leave Industrial Bank of Japan to start the Crimson Group, a consulting company, and found Rakuten. Incidentally, the name for the Crimson Group is an ode to Harvard's Crimson.

The Japanese word Rakuten means optimism and Mikitani had that in spades. Could he have known when he spent his days working for his consulting group and his nights building his e-commerce website with his first five employees that just a few short years later, Rakuten would become Japan's largest commerce website and globally one of the sales leaders? From five employees in 1997 to 10,351 worldwide by 2013, Rakuten has experienced tremendous growth.

But back in 1997, Mikitani and his Rakuten team set out to solve a problem that was inhibiting Japan's e-commerce growth. In those days, most of Japan's major Internet providers charged $3,000 per month plus 15 percent of sales to set up and maintain a platform for e-commerce sites wanting to sell products online. Mikitani cut through all that bureaucratic waste and gave his merchants access to Japanese Internet shoppers for a flat fee of $500 per month, with no commission on sales if they paid upfront for six months of access fees.

Three years later, in 2000, Rakuten went public on the JASDAQ. Today, Rakuten is Japan's largest cybermall and is making strides on obtaining that title globally. In 2005, Rakuten started expanding outside Japan, mainly through acquisitions of other sites including New York City-based Linkshare, which offers performance based online marketing and sales programs. Two of Rakuten's largest acquisitions were the U.S. site Buy.com for $250 million and France's PriceMinister for $293 million, both in 2010. Other sites Rakuten has acquired include Brazil's Ikeda, Germany's Tradoria, the UK's Play.com, Spain's Wuaki.tv, and Canada's Kobo.

In 2010, Hiroshi Mikitani issued a companywide edict mandating that by 2012, all employees become fluent in English. It is going to become the official language of Rakuten, despite being a Japanese company with mostly Japanese employees. Mikitani has been quoted as saying "English is not an advantage anymore – it is a requirement". As of 2012 promotions at Rakuten are dependent on passing English language tests. Interestingly, while Mikitani's employees learn English, he is learning Mandarin Chinese.

In 2012, Rakuten invested $100 million in Pinterest. This is a savvy move as the internet scrapbook community is frequently used to bookmark products people are interested in buying. A company like Rakuten could leverage the information generated by Pinterest to predict hot sellers for the holidays, for instance.

Rakuten is Japan's largest online retailer, linking to more than 40,000 online merchants, and selling over 100 million products. Rakuten has multiple businesses and services through the website including the retail element. The site also offers consumers credit services in the form of loans, mortgages, and banking; personal web portals, hotel booking and other travel related transactions; an online securities brokerage; professional sports, and an online video club.

With a net worth of $8 billion, Hiroshi Mikitani is a very wealthy man. Naturally almost all of his fortune is from the 534 million shares of Rakuten that he controls with his wife Haruko and through his consulting company the Crimson Group. Together the Mikitanis control 40 percent of Rakuten.

Mikitani bought Kobe's professional soccer team, Vissel Kobe in 2004 thought a bankruptcy auction at which he was the only bidder. Mikitani also owns a professional baseball team through Rakuten, the Tohoku Rakuten Golden Eagles. The team won the Japan Series in 2013.

Mikitani's wife Haruko also works at Rakuten. The couple has one child. When asked what he would do with all of his wealth, Hiroshi Mikitani responded that he plans to donate much of his fortune to philanthropic causes. He has particular interest in endowing an improved English language program in the Japanese educational system.