The Highest Paid Musicians Of 2013

By Amy Lamare on December 18, 2013 in Articles › Entertainment

The Material Girl is still very much living in a Material World. In 2013, more than 30 years since she launched her career, Madonna is once again the Highest Paid Musician in the world. Admit it, you didn't think Madonna still had it in her! The 55-year old entertainer topped performers half her age (Lady Gaga) and nearly a third her age (Justin Bieber) in 2013. Her wildly successful MDNA tour helped Madonna ring in the New Year and the cash register as the highest paid musician of 2013.

The top five highest paid musicians of 2013 certainly contains some eye popping dollar figures. Interestingly. with the exception perhaps of Lady Gaga and Toby Keith, the list essentially misses the pulse of popular mainstream music today. For exampe, Sean "Diddy" Combs, the highest ranking hip hop act, ranks at number 12 with $50 million. And the majority of Diddy's dollars come from his endorsement deal with Ciroc vodka, not music. Other hip hop moguls making the top 25 are Jay Z at number 19 with $42 million, and Dr. Dre at number 21 with $40 million. Toby Keith is one of four country music stars to make the the top five. Another country/pop superstar Taylor Swift comes in at number eight with $55 million. Kenny Chesney finished at number 10 with $53 million, and Tim McGraw ranks number 25 with $33 million. Rounding out every other spot on the top 25 highest paid musicians are pop stars, arena rock bands, and two DJs. The DJs making the list, Calvin Harris with $46 million and Tiesto with $32 million. Those two DJs come in at number 14 and 26, respectively. Keep reading to see the top five highest paid musicians of 2013. 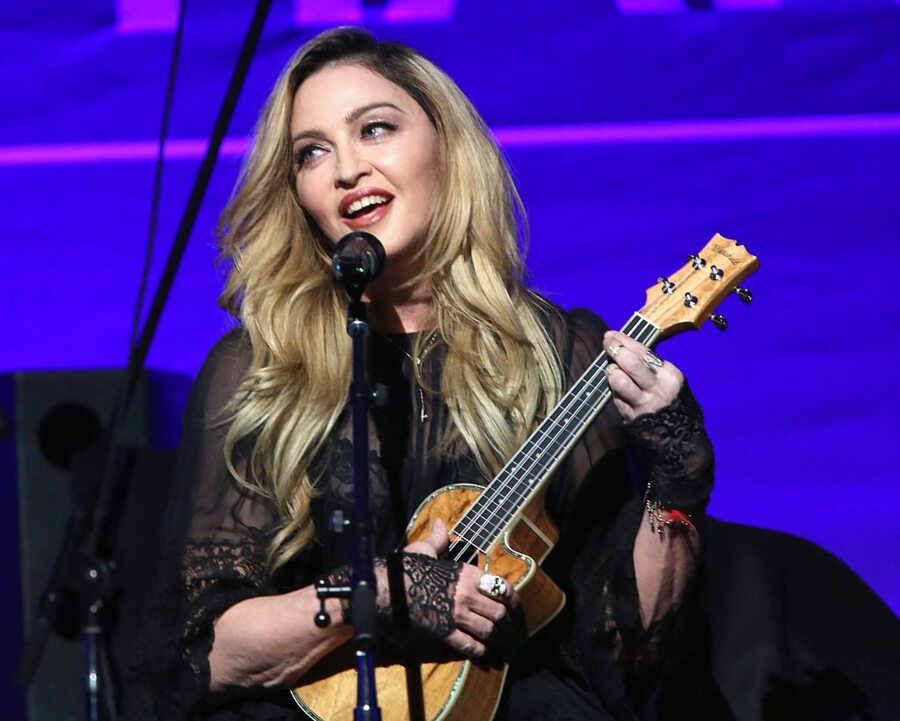 Madonna's MDNA tour grossed $305 million—with the bulk of that coming in during the end of her tour as Madonna wrapped up her dates in South America. With her epic grossing tour, Madonna won the Top Touring Award at the most recent Billboard Music Awards. Between the MDNA tour, merchandise sales at concerts, Material Girl clothing line, and Truth or Dare perfume, Madge brought home $125 million this past year, making her the highest paid musician of all genres in the world.

Lady Gaga may have come in second place with a mere $80 million in earnings, but she did also cut her Born This Way tour short when she injured her hip. As it is, the shortened tour grossed more than $160 million, had the Queen Monster been able to complete the tour, it likely would have topped $200 million, still not enough to dethrone Madge. Considering the unfinished tour, Lady Gaga's second place showing is amazing, since for the top artists, touring is a major part of their personal revenue streams.

The 1980s rockers racked up $79 million from their Because We Can tour, and why not? Plenty of aging rockers still tour and draw the crowds to support it. In fact, Jon and the boys grossed more than $3 million in every city of their worldwide tour. And I'm sorry but it gives me faith in mankind when Bon Jovi makes more money than Kanye.

Toby Keith comes in at number four and the top country act of the year with $65 million. Keith augments his touring income with millions of record sales, 18 restaurants, and a mescal line. In fact, over the past five years, Toby Keith has made $270 million from this combination of concerts, albums, and branded products.

OK – how did this happen? Who out there is actually still listening to Coldplay? Enough of you to garner them the ranking of 5th highest paid musicians of 2013 with $64 million apparently. The Brit "rockers" made more money than the band they are often (and erroneously) compared to—U2. Alright, it could be worse. It could be Nickelback. Or Fall Out Boy. Shudder. (Disclaimer: I am a music snob).