The Highest Paid Actors In The World

By Amy Lamare on October 6, 2014 in Articles › Entertainment

It's no secret that the top actors in Hollywood reel in insane amounts of money every year. And if you're lucky enough to be one of the top of the top actors, you make an absolutely astronomical amount of money. As a rule, salaries for the highest paid film actors are currently in the $20-30 million range, but other factors can cause that number to rise substantially higher. An actor or actress can, for instance, defer all or part of their salary against a percentage of the film's gross in what is known as a profit participation deal.  There's also a lucky few (Sandra Bullock we're looking at you) who can negotiate "first dollar" gross deals. Bullock had a 15% first dollar deal for "Gravity."  This means of every dollar the studio ever received for Gravity, 15% went (and will continue to go) to Sandra BEFORE any costs for production or marketing are taken out. Endorsements and other deals will also add to a celeb's annual earnings, but for now we're just gonna examine acting paychecks. Below is a list of the highest paid actors in the world based on earnings between June 2013 and June 2014…

After Sandra Bullock won the Oscar for "The Blind Side" in 2010 she was in the right place to strike while that proverbial iron was hot.  The "Gravity" producers knew they'd have to really sweeten Bullock's deal, especially considering production on the film was going to take YEARS instead of the average 2-3 months a film shoot usually is. For "Gravity" Bullock received $20 million upfront plus the aforementioned $15% of first-dollar gross. "Gravity" made $716 worldwide. Bullock also gets the same percentage earned from DVD rentals, merchandise, TV licensing, etc.  Her salary for the buddy –cop comedy "The Heat" was also reportedly $10 million.

Robert Downey, Jr. also has a first-dollar gross for the "Iron Man" franchise. RDJ's deal for five to seven percent of the $1.22 billion "Iron Man 3" earned him roughly $50 million.  For non-Tony Stark roles, RDJ makes around $15 million per film. Downey Jr. also has a backend participation deal for "Avengers: Age of Ultron".

Dwayne Johnson is the current go-to action star today.  His brawn and inherent likeability make him a bankable star. The Rock made $12 million for "Hercules" but that was a bargain for the producers, as Johnson usually makes about $15 million for films, including the upcoming "San Andreas" and "Fast & Furious 7".  Johnson is also expected to get a big bonus when the seventh installment of the "Fast & Furious" franchise is released.  For "Pain & Gain" Johnson eschewed a salary in exchange for a back-end deal, which was a good bet as the film went on to gross four times more than the $26 million it took to make.

"The Wolf of Wall Street" was a monster hit, making it hard to imagine now what a risk the role was for Leonardo DiCaprio.  He had to significantly cut his upfront fee so that the film could even get made. Five Oscar nominations – including for Best Actor- and $395 million later, DiCaprio can rest easy knowing his gamble paid off.  But one nearly $400 million grossing movie wasn't enough for DiCaprio this past year; "The Great Gatsby" earned $351 globally.

"Taken" was a surprise hit and now, whenever Hollywood needs a star with a certain set of skills, they call on Liam Neeson. He earned $20 million for "Tak3n," the third installment in the "Taken" franchise, plus the money for his backend deal on "Taken 2", which earned $374 million worldwide. He also had "Non-Stop" and "A Walk Among the Tombstones" come out in the past year, solidifying his status as the top over 50 action star.

Bradley Cooper's ability to swing from broad comedy to darker dramas and everything in-between has made him one of the hardest (and most often) working actors in Hollywood. His "Hangover" franchise deal was lucrative. Cooper earned $15 million for the third and final installment in the comedy franchise. The success of "American Hustle" and "Silver Linings Playbook" (not to mention his Oscar nominations for both) have also allowed the actor to land a plum role in the next Cameron Crowe romantic comedy.

Jennifer Lawrence took home the Oscar for her role in "Silver Linings Playbook" and then landed the coveted role of Katniss Everdeen in "The Hunger Games" franchise, a role that she was paid $500,000 for upfront for the first installment and $10 million for the second installment.  That doesn't even take into account the final two "Hunger Games" movies that she has already shot, and "X-Men: Apocalypse" which is in pre-production.

Cameron Diaz was smart to capitalize on the success of 2011's "Bad Teacher." In the past year, Diaz has filmed "Annie", "Sex Tape", and "The Other Woman". The latter's $194 million worldwide gross will keep Diaz in demand and well paid for comedies.

Rumor has it that the advance Scarlet Johansson received for "Avengers: Age of Ultron" was in the high seven figures. However, that figure should rocket even higher as her role in "Lucy", which earned $395 million shows she is a proven box office draw that can anchor action movies. 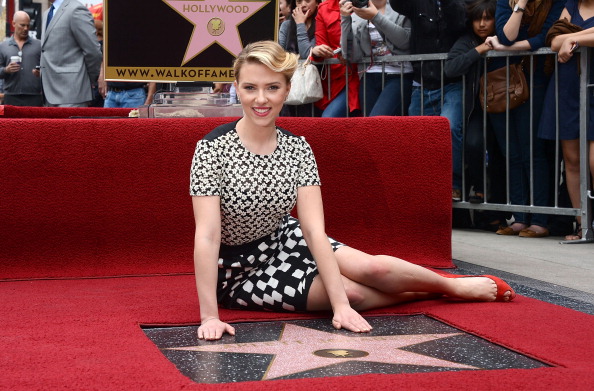 Jennifer Aniston cashes in big time on her endorsement deals with Smartwater and Aveeno. In fact, she makes about as much there as she does off feature length comedies, like "Horrible Bosses 2," for which she was paid $5 million upfront. This is just in addition to her Friends residuals. Aniston's deals are structured to be heavy on the back end, earning her eight figure checks when they do well like last summer's "We're the Millers" did. That comedy made $269 million worldwide.