By Paula Wilson on January 18, 2015 in Articles › Entertainment

Think fast! Which music artist has sold the most digital singles ever? Michael Jackson? Rihanna? The Beatles? Justin Bieber? Ke$ha? There are probably eight or nine artists who come to mind immediately, but if you're the average Westerner, there's a good chance that your guesses would all be wrong. The music artist who has sold the most digital singles ever, is a Taiwanese singer-songwriter, musician, and actor/director named, Jay Chou. What? Who? How? Sit back and prepare to be schooled because Jay Chou, who has amassed a net worth of $75 million, has been quietly taking over the musicworld since the release of his debut album 15 years ago.

Jay Chou was born on January 18, 1979 in the Linkou District, Taipei County, Taiwan. His parents were former teachers who noticed that Jay exhibited above average musical ability early on. He began taking piano lessons when he was four, and added cello and music theory when he was eight. He carried a tape recorder around like other children haul around a favorite stuffed toy so he could record everything he heard. As a young teen, he disappeared into music. His parents were in the process of getting a divorce so the piano and cello became his refuge. 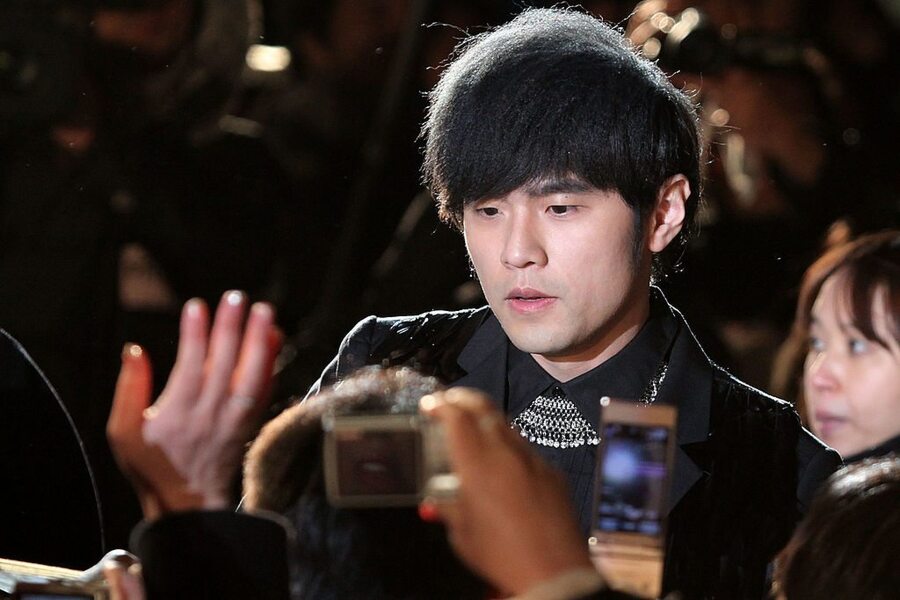 Jay went on to major in Piano and minor in Cello at Tamkang Senior High School, an arts magnet school. He also began writing his own pop songs and improvising. Unfortunately, his laser-like focus on music came at the expense of his other grades. Only the top students can apply for university in Taiwan, and his mediocre grades knocked him out of the running. Instead, he was sent to the military. However, his enlistment proved to be short-lived because he was subsequently diagnosed with ankylosing spondylitis, an inflammatory disease of the spine. Uncertain of what to do with his life after the military, Jay began working as a waiter. Meanwhile, his mother tried to convince him to become a music teacher.

Then fate stepped in. Unbeknownst to Chou, a friend had entered them both in a televised talent show called "Super New Talent King". Chou played the piano while his friend sang. They didn't win at all. In fact, the judges called the friend's voice, "lousy". On the flip side, Jacky Wu, the host of the show and the Taiwanese answer to Simon Cowell, was impressed by the score for the song they had performed. When he found out that it was an original written by Chou, Jacky invited the young artist to come to his studio. Once there, Chou was paired with a young lyricist named Vincent Fang. The pair spent the next few years honing their skills in producing, mixing, writing, and recording.

Impressed by Chou's dedication and ever-increasing skills, Wu made him a deal. He'd release Chou's first album, under his Alfa Music label, after Chou had written 100 songs. Chou chose ten songs from those that had been rejected by other artists, and in 2000, just two years after he'd met Wu, he released his first album "Jay". The album was an almost instant hit. Combining Chou's classical music roots with pop, R&B, rap, and traditional Chinese music, the album showcased the emergence of Chou's distinct style. The album went on to become one of the Top 10 albums of 2000 and netted Chou five Golden Melody Award nominations and one win for Best Mandarin Album. Jacky Wu pushed the album every time he was on television and Chou began perfecting a sort of emo persona that audiences ate up.

A year later, Jay released his follow up album, "Fantasy". It netted him five Golden Melody Awards, and like his debut, became one of the Top 10 Selling Mandarin Albums of the Year. It sold over 2 million copies in Taiwan. At this point, other Asian countries began to take notice of the singer.

Since then, he has released a new album almost every year. "Aiyo, Not Bad", his 13th album was released the last week of December 2014 and has already sold nearly 50,000 copies. Since his 8th album, "On the Run", he has been releasing all of his work under his own record label, JVR Music. He's also had six world tours, appeared in 12 movies. His most notable role for Western readers is as Seth Rogen's side-kick in"The Green Hornet". Jay has directed two moderately successful feature films of his own in Taiwan and he's appeared on several Taiwanese television series. He is slated to work opposite Daniel Radcliffe in the upcoming film, "Now You See Me: The Second Act".

In China, Jay appears in commercials for Sprite alongside Kobe Bryant. He also has his own line of ASUS Computers and has previously endorsed Levi's, Motorola and Panasonic.

Along the way, Jay sold over 30 million albums and an astonishing number of singles. To understand just how popular he is in Asia, you only need to look at the numbers. Two of his digital singles, both released in 2010, sold 36.3 million units. That was just two songs. He's released 13 albums, all of which had chart-topping singles. By comparison, Rihanna has the highest number of best-selling singles in the US market. She has sold 86.57 million singles over the course of 12 songs.

The Five best-selling digital singles of all time are:

As you can see, Jay Chou is like a one-man music industry, and according to those who work with him he's completely focused on making art. While "The Green Hornet" didn't introduce him to Western audiences the way he hoped, his second film might help him become more recognizable. Honestly though, he doesn't really need the additional recognition. He seems to be doing just fine. Did we mention he's worth $75 million?