He's The Richest Former Pro-Athlete In The World… And You've Never Heard His Name.

By Brian Warner on December 7, 2014 in Articles › Entertainment

Pop quiz: Who is the richest former professional athlete in the world? Is it Magic Johnson? David Beckham? Roger Staubach? Maybe Arnold Palmer? Let's be honest, everyone reading this probably guessed Michael Jordan without skipping a beat. After all, you probably heard a few months back that Michael Jordan's net worth finally surpassed $1 billion after a re-evaluation of his ownership stake in the Charlotte Bobcats NBA franchise. Michael also continues to earn at least $100 million a year from various endorsement deals and shoe royalties. That's roughly $274,000 per day, without lifting a finger. So Michael Jordan must be the richest retired athlete in the world, right? Well, while Michael is extremely rich, he is actually the second richest former pro-athlete in the world. Who is number one? I guarantee you've probably never even heard his name…

The richest athlete in the world is Ion Țiriac. Ever heard of him? Most Americans are probably shaking their heads, but I guarantee if you're from Eastern Europe or if you were fan of professional tennis in 1970s and 1980s, the name might be very familiar.

Ion Țiriac was born on May 9, 1939 in Transylvania Romania. As such, when he started to slay opponents on the tennis courts later in life, he appropriately earned the nickname "Count Dracula". But before he became a tennis star, Ion was a star player for Romania's national ice hockey team. He even represented Romania at the 1964 Olympic Games in Austria.

Shortly after returning from Austria, Ion made the decision to switch to professional tennis. Around this same time, future tennis Hall-of-Fame inductee (and fellow Romanian) Ilie Năstase, had begun his ascension to the top ranks of tennis. Together, the Romanian duo became one of the most feared doubles partnerships in tennis. Ilie Nastase's nickname was "Nasty", so it was literally Nasty and Count Dracula vs. the world. They finished second in one of the very first major tournaments they entered, the 1966 French Open. They would win the French Open doubles title in 1970.

It was a very respectable career. Respectable enough that when Ion retired in 1980, he was a hot commodity as a coach and manager. He immediately became Ilie Năstase's full time coach and eventually went on to coach for superstars such as Mary Joe Fernández, Guillermo Vilas, Marat Safin, Steffi Graf, and Goran Ivanišević. Between 1984 and 1993, Ion personally orchestrated Boris Becker's ascent to become the #1 ranked player in the world (1991). 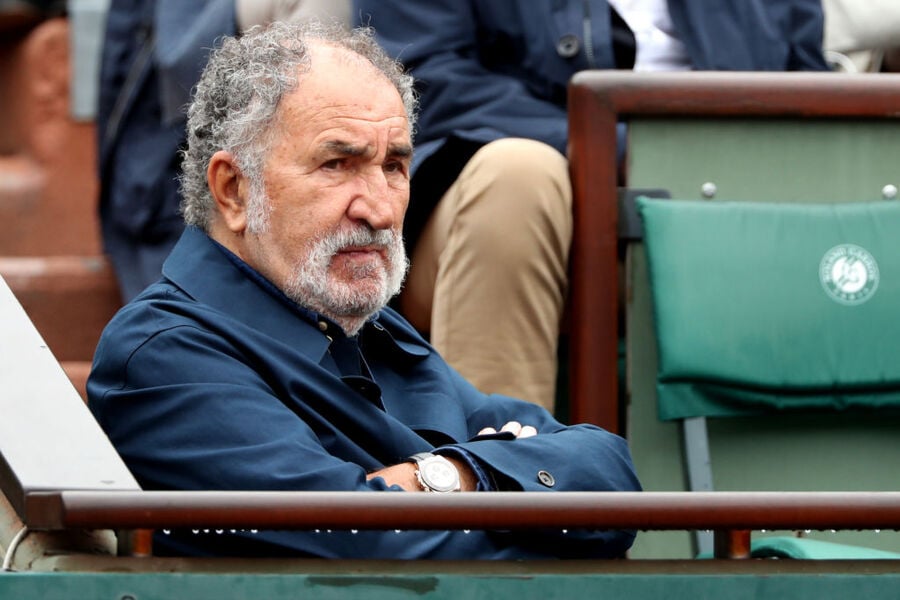 Managing Boris Becker required Ion to spend the majority of his time in Becker's home country of Germany. And as you might imagine, the late 80s/early 90s were a very interesting time for a Romanian person to be living in Germany. Keep in mind that that back in the 80s, Romania was still a communist-controlled nation that technically was known as the Socialist Republic of Romania. But that changed overnight on November 9, 1989, when the Berlin Wall fell.

As a beloved Eastern-European sports star living in Berlin, Ion Țiriac was uniquely positioned to capitalize on the rapidly changing world landscape. He had the money, experience, fame, connections and guts to strike while the iron was very hot. Ion knew there would soon be many opportunities to bring capitalist-driven businesses to formerly communist countries like Romania.

And what's more capitalist than opening a bank???

In 1990, Ion founded Banca Țiriac (yup, he named it after himself), the very first privately owned bank in post-communist Romania. He then went on to launch retail businesses, auto dealerships, an airline and an insurance company. He also owns a large residential and commercial real estate portfolio. Today his companies include Tiriac Holdings, TiriacAIR, HVB Tiriac Bank, Allianz-Tiriac Asigurari Romania, TiriacAuto, Tiriac Leasing, and Tir Travel. One of his most notable real estate ventures has been the Stejarii Country Club in northern Bucharest. In addition to being a country club, Stejarii features a residential complex and a museum that houses over 100 rare luxury cars that are part of Ion's personal collection.

In 1990, Ion founded the Madrid Open. It has since grown into one of the most important tournaments in the tennis world. He exclusively owns the license for the tournament and funds the operation himself with the goal to some day turn it into an event on the same level as larger Grand Slams like London, Paris and Melbourne. Ion is also a qualified professional pilot.

He had never earned more than a few million dollars as a professional athlete but within two years of the Berlin Wall falling, Ion Țiriac was worth over $100 million. By 2000 he was worth $500 million. In 2005 his net worth was estimated at $900 million. In 2007, Forbes recognized Ion as the 840th richest person in the world with a net worth of $1 billion.

In 2013, Ion was elected to the International Tennis Hall of Fame.

As of this writing, Ion Țiriac has a personal net worth of $2 billion. He was Romania's first billionaire and the richest athlete in the world. His net worth is exactly double Michael Jordan's.

So there you have it! The next time someone asks you to name the richest athlete in the world, you'll know the correct answer!